The Inkubator team gives us a seasonally appropriate crossword featuring a scary character. No, not that one. I’m looking forward to more puzzles from Chandi after this excellent debut!

The circles in each theme answer spell out a series of items. 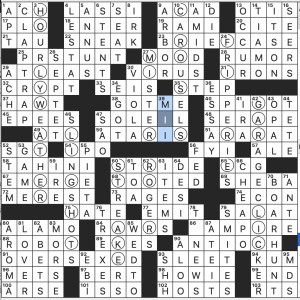 And the revealer at 86a, in case you haven’t figured it out: [Halloween horror each theme entry has a hidden ability to defend against]: VAMPIRE.

I enjoyed this theme! The base entries are all solid and it was fun to decode.

What I didn’t know before I did this puzzle: that VIOLA Davis is one short of an EGOT. She’s missing the Grammy. 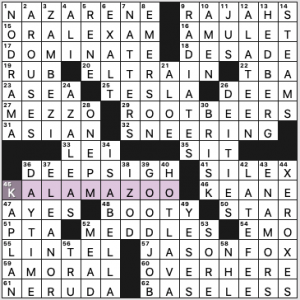 Okay, I didn’t want to have the Inkubator puzzle spoiled by Jenni’s review above, so after solving the NYT, I tackled the Inkubator. Yes, I now realize I could have just drafted my review in a separate window and avoided the spoilers, but Inkubator editor Tracy Bennett had hinted that Chandi Deitmer’s puzzle was gonna be a good one. So I solved two puzzles in a row and the second one was tremendously fun and it dislodged my NYT puzzle thoughts from my head. Let us try to recreate my thought processes from 15 minutes in the past, shall we?

Okay. Puzzle felt a little harder than most Fridays,  but not excessively so. Weird to see NO DRAMA with an Obama clue because I just saw that entry in another crossword with a pop music clue (there’s at least one song with “don’t want no drama” in the title). Entries that caught my eye in a good way: DEEP SIGH, KALAMAZOO (this summer I did some postcarding on behalf of a Kalamazoo candidate for Michigan’s state house—good luck on Tuesday, Christine Morse!), BASELESS [Like wild accusations] (you know—like every bit of heinous nonsense from QAnon), the ZAMBEZI, ELEANOR Smeal, ISABELLA Rossellini, EMERSON College (friend’s kid just started there), and Mitch HEDBERG.

Quick write-up today! This was a fun, lightning-fast lightly challenging puzzle from Caitlin Reid that I enjoyed and almost wish had lasted longer! Caitlin’s clues are always a delight, and while the long entries today weren’t exactly groundbreaking, most were still interesting. 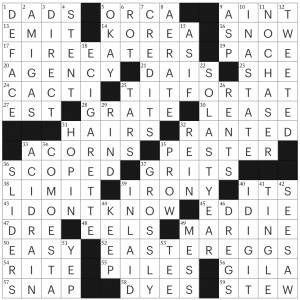 The grid shape didn’t create a ton of opportunities for long entries, but the ones were got were 9s and 10s including: FIRE EATERS / TIT FOR TAT / I DON’T KNOW / EASTER EGGS / E-CIGARETTE / SO LAST YEAR. I particularly enjoyed SO LAST YEAR [Like, way passé] and EASTER EGGS [Hidden bonuses], a reference to hidden bonuses in video games or movies rather than literal eggs. I particularly did *not* enjoy E-CIGARETTE, but I’m a public health person and have a visceral negative reaction to them — it’s obviously totally valid for a puzzle!

Overall, I DIG IT. Tons of stars from me for a fun puzzle that flew by. Happy Halloween! 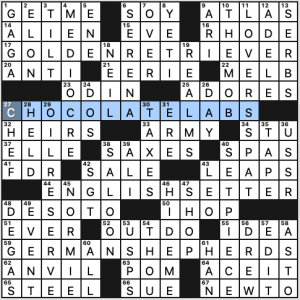 Cute and consistent. And I believe this is a debut for one of the constructors, so congratulations are in order.

Plenty to like in the fill here: LOVERS’ SPAT, OIL RESERVE, SET PIECE, and maybe my favorite entry in the grid: “HIDE ME!” None of this is MEDIOCRE. Also, THE MOB and new-to-me NORMIE [One sticking to the status quo, in slang]. Kids these days! And what’s not to like about TAXES crossing SAXES at the X in the center of the grid?

Nice puzzle, especially for all you dog lovers out there. 3.9 stars.

I leave you with Willy Wonka’s Chocolate Room. 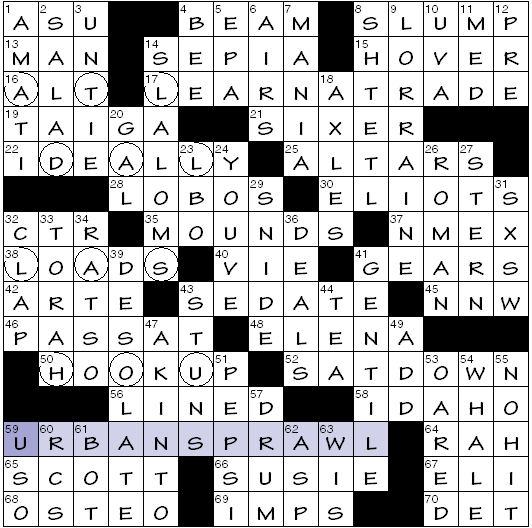 Can’t recall a theme like this before, where only some of the relevant squares are circled and the solver is asked to do the rest.

So. The circles are in alternating squares and the pattern continues through the row. The circled letters comprise the standard three-letter abbreviation for a city, and the uncircled ones complete the full name.

I like the theme and think it’s quite clever, but it could have been a bit stronger and more elegant were it more consistent. (1) Three of the four start with the standard abbreviation, one does not. (2) Three of the four use all the letters from the grid entries, while “Atlanta” ignores the final E in TRADE; had the pattern continued to the end—as it does in the other themers—the word yielded would be ATLANTAE.

I don’t mind at all that LAS VEGAS uses three entries for assembly. It is after all in the center row, and as such has no symmetrical partner.

Anyway, this is an interesting and enjoyable theme, but the whole crossword could have been a little tighter.