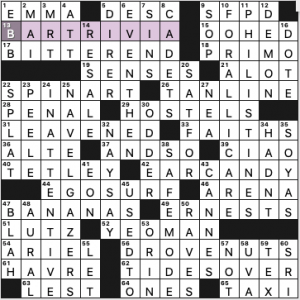 So, I sure didn’t know 1-Across today! 1a. [YouTube star Chamberlain, whom The Atlantic called “the most talked-about teen influencer in the world”] is apparently named EMMA. I missed that Atlantic story, my collegiate son doesn’t follow her and considers “influencer” a fake job, and I am too old to give a rat’s ass about any influencers out there. But congratulations to EMMA on making the top of the NYT crossword!

Fave fill: BAR TRIVIA (which maybe I can go to in person in 2022 or 2023?), BITTER END, SPIN ART (see video below for some SPIN ART being birthed), EAR CANDY, DROVE NUTS and BANANAS (anyone else hungry from these three?), TIDES OVER (some NUTS might tide me over till morning), NAVEL GAZERS, “FOR ALL I CARE,” and PHILISTINES.

Not so keen on DESC, ERNESTS, DIRER, OR IN, and SOYAS.

This puzzle was such a breath of fresh air! And possibly my fastest New Yorker solve ever, at 3:25. Just smooth as butter and fun and silly, which is honestly exactly what I needed to cut the tension of the week that this has been. 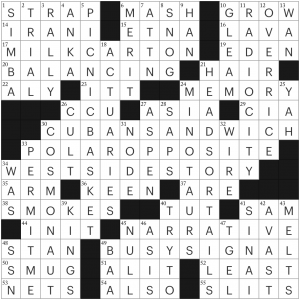 One incredible thing about this puzzle is how many A+ long entries it managed to cram in without sacrificing fill. We have a central staircase of CUBAN SANDWICH / POLAR OPPOSITE / WEST SIDE STORY, two long downs of PICNIC BASKET / HEADS OR TAILS, and corners stuffed with MILK CARTON / BALANCING / NARRATIVE / BUSY SIGNAL / MINOTAURS / ACTUARIES / RADIO CITY / OVER ICE / PERMIT ME / COSMONAUT. How! Is this puzzle! So clean!!??

I also appreciate that this puzzle right out of the gate is like [Bra part] WHAT ARE YOU GONNA DO ABOUT IT and follows it up many clues later, when you least expect it, with [Bra part] AGAIN. Could these entries have been clued with zero references to bras? Absolutely. Are bras something that at least 40% of the adult population put on their bodies at least once a week (pre-pandemic)? YES THEY ARE. They belong in puzzles.

Overall, my favorite puzzle of the week. All the stars from me. See you next week, when hopefully the world is a more stable and kind place.

The title of this puzzle is a craps term which was buried deep in my little grey cells since I haven’t played craps in years. But the puzzle doesn’t really have anything to do with that game.

Instead, each theme answer is a colloquial phrase meaning, “Pass,” or more accurately, “No.” Each one is clued humorously via a dialog between two parties involved in a literal interpretation of the phrase. 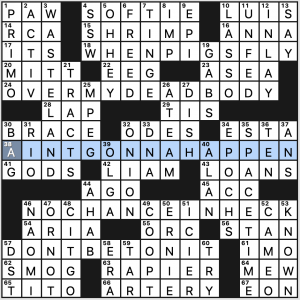 I’m partial to puzzles with colloquial phrases as theme answers because they always feel so lively, and this one’s no exception. I enjoyed this theme.

In the fill, WASTELAND and the SPACE-TIME continuum make for a nice pairing. Also nice: RAPIER wit and and old SOFTIE. We’ve seen OH HI quite a bit, but this is the first I’m seeing OH HEY. I’m not sure how I feel about it, but the clue is spot on: [“Just noticed you there!”]. 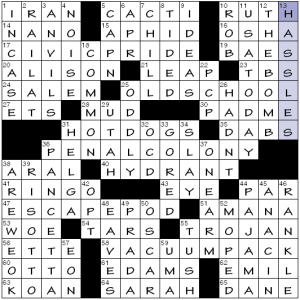 Just some collective nouns for some animals incorporated into theme answers.