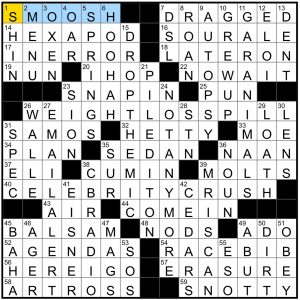 For those who don’t already know me on Crossword Twitter, I spend a good 10% of my Twitter feed complaining that the NYT Friday and Saturday puzzles are too easy. I’d love it if themelesses were regularly as hard as Newsday’s Saturday Stumper, or like the NYT was about 10 years ago. Kameron’s and Paolo’s puzzle was not that, but at least it gave me enough of a fight to take me over the four-minute mark, which means it’s above-average difficulty for a NYT Saturday.

I was salivating when I saw the byline. I LIVE for any KAC puzzle and Paolo, although he makes me feel old, is very very good at what he does too. And there was indeed some fine stuff in this puzzle:

The central band of long vertical entries — DROP THE MIC, PILED IT ON, and NOT ANYMORE, feel totally natural and uncontrived. Nice. On the other hand, I could deal with a smidge more feminine energy: just one woman, HETTY Green at 32A, is mentioned by name, and though we get NUN at 19A it doesn’t really balance out the bro energy of MOE (33A), ELI (37A), ART ROSS (58A), WALL-E (26D), and Will EISNER (41D).

In sum: I’d have loved to see another woman in the grid, but overall I was anticipating a very good puzzle based on the byline and this did not disappoint.

A mind expanding puzzle, for sure. 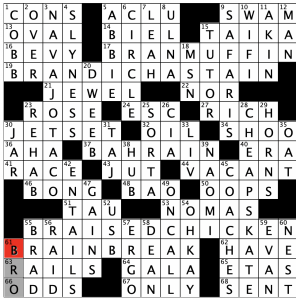 I found this one significantly tougher than most Universal grids! I think it’s mostly due to those names up north. I had a lot of trouble with ABBIE crossing BRANDI (which I initially thought was BRENDA). My cat’s name is ABBY/ABBEY/ABBIE and I never know how to spell it. Hadn’t considered the ABBIE version until now, so I’ll throw that in possible future spellings. CIRCLE being clued as a skirt shape, BIEL which I can never remember how to spell, and a LEAH I was unfamiliar with didn’t help my cause up there! But I elbow- greased my way out eventually.

I also had never heard of a NAVAJO TACO, but I like the sound of it! Gonna order me one of those next time I’m at Taco Bell and see what I get.

TAIKA and NAOMI were tough for me too, but such is the nature of fill with two themers stacked I suppose.

All in all, I enjoyed the challenge and the AHA when I finally realized the theme had nothing to do with BRAN.

**Looks like a debut from Layla Beckhardt! Congrats and thank you! 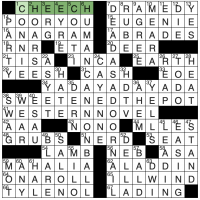 A mercifully quick solve on this one. I like the confirmation that I haven’t yet lost all of my marbles! I am afraid I may have lost one or two, though, so I will continue in my puzzling ways to fend off the aging process as best I can. Great puzzle today, with more than one or two entries that caused me to smile widely, and that makes it all worthwhile! I will look at this a great practice for the Monday night Boswords puzzle, which will be a lot harder than this, but at least I will be confident! 4.3 stars today.

That’s all for now! I have more Puzzle Boat 7 to work on this weekend. I think we are 25% done. Yikes! 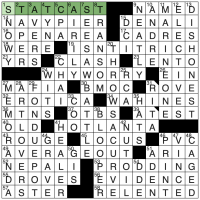 My strategy this weekend: take a nap. I think I am getting slower with my solving times, and I think a nice nap will help! The upper half of this Stumper fell in about 5-6 minutes; the lower half alone slogged on for another 20 or so. There are only two error marks, which is a minor miracle, since I thought I had wrong stuff all over the place. I am a little weary, though, and that is where the nap comes in. Perhaps that will help my Boswords solve on Monday nights, which has been hovering well over the ten minute mark. 4.8 stars for a splendid challenge.

Some of the carnage:

Everyone have a safe and healthy weekend! It’s supposed to be nice weather here! 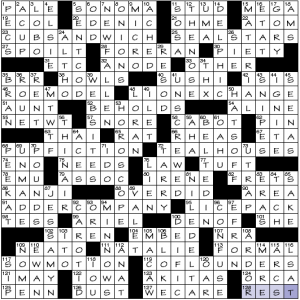 Parsing the title elsewise, it’s “Animal L-Overs”. Which is to indicate that the letter L is migrating laterally from one entry to another, in the process converting two words to the names of animals—one by addition and one by subtraction.

The breakdown: consistency points for the L travelling in the same direction (left to right) each time; anomaly demerit for the original sea stars also being an animal (I’ll merely acknowledge my standard complaint that it isn’t seals but sea lions that are associated with circuses); inconsistency in that some of these are actual species and some of these (i.e., CUB, PUP, SOW) are merely types (young or female) of animals.

I appreciate that it was probably difficult to come up with five pairs that would work for this theme, but it still comes across as a bit haphazard.

I dunno. That seems like either a lot or not enough, depending on authorial intent.

So. Before I understood what the theme was, I speculated that it was animal related puns or something, and thought that the base phrase for 23-across was CUBAN SANDWICH. Naturally, I spent the next few minutes mentally preparing to include the following song in the write-up. And even though it turns out to be erroneous, I need to follow through.