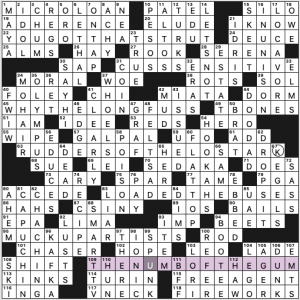 As the title hints, the theme answers change the long A sound of “wait” to the short U sound of “what”:

I won’t go into much detail here, on account of being busy with the holiday and all. Couple things caught my eye:

Four stars from me. Enjoy your weekend!

For some reason, the title feels extremely apt today. 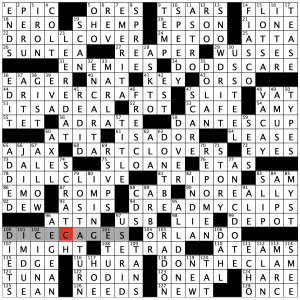 I did just fine solving this, but I (somehow!) completely missed the theme until after the solve. Hadn’t even noticed the consistency of the D.C. phrases. Had it been just a single, typical letter/s addition theme, I’m sure I would’ve caught on, but with the two added letters in different parts of the phrase… ok I think I’m looking for an excuse. To be honest, when I saw the title, I thought state capitals would be added in, so my mind went with that. Also, this was sorta-kinda-not-really confirmed with the first themer, DROLL COVER… where I saw DOVER (Delaware). And although I couldn’t make out a base phrase (ROLL C?), I figured it would eventually reveal itself.

The phrases are a lot of fun though. DREAD MY CLIPS and DON THE CLAM are my two faves.

Super smooth solve for me moving steadily from north to south. I was hung up momentarily on the DODDS CARE / DOLAN crossing. I was thinking Chris DOWD (the actor whose last name is actually O’Dowd), but I couldn’t accept WOLAN as a name. And DOND didn’t look right though NOLAN did. So eventually, DOLAN.

True, but rather ballsy clue for 98A [Emulate many a politician] LIE. Hopefully, we’re about to hear a lot less lying than we have been.

Fun way to start the day! Enjoy the rest of the weekend!

What a delightful title, is it not?

THEME: Phrases that mean “positive” in more than one sense of the word. 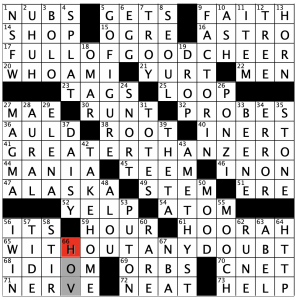 Excellent puzzle today! A nice, neat theme with three lovely grid-spanners. I much prefer puzzles with three solid themers than those that cram in a few more, but sacrifice in the fill area.

Fairly fast solve for me, though it’s been a while since I’ve been under four minutes. I blame my eyesight, which I am loathe to say is not as great as it was just a couple years ago.

Really wanted AMETHYST to be EMERALD and HOORAH to be HOORAY and NUBS to be NIBS. But those were the only spots where I faltered for the most part.

Thanks for this one. Happy Sunday indeed!

Daniel A. Finan & Brian Herrick’s Los Angeles Times puzzle, “Did You Get The Part?” — Jenni’s write-up

The theme is sort of cryptic-in-reverse – each theme answer is like a cryptic clue with the clue in this puzzle being what the answer would be in the cryptic. Well, that didn’t make much sense. Let’s take a look: 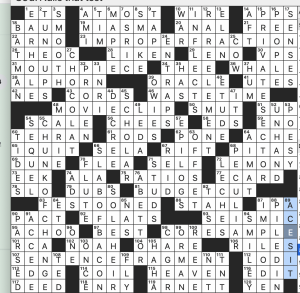 Los Angeles Times, November 9, 2020, Daniel A. Finan & Brian Herrick, “Did You Get the Part?” solution grid

I really liked this theme. Consistent and solid without being predictable and very entertaining. Fun Sunday!

What I didn’t know before I did this puzzle: see above re: IMPROPER FRACTION. I also did not know that the Milad Tower is in TEHRAN.

Theme: Three plays/musicals are put together to create each wacky, grid-spanning theme entry. 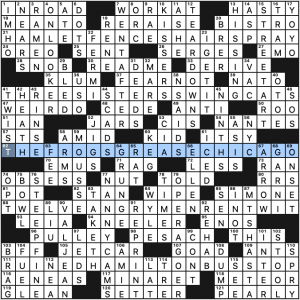 I did not figure out the theme during the solve. Without fail, I would recognize two of the titles in each entry but kept scratching my head as to where the third word came from. I guess I’m not enough of a theater-goer. Consequently, the theme left me confounded. I expect I’m not the only one who had this problem.

I am impressed, though, with these finds and the fact they’re all grid-spanners and  that they have a decent amount of surface sense. That said, I wish the last one was a present-tense sentence like the others; it is significantly weaker for not being so, IMO.

As for the fill, it’s very good with ONLOOKER, OPERA-GOER, “I GET IT,” NANNYCAMS, Jean VALJEAN, STREET ART, JETCAR, “FEAR NOT,” KISSERS clued as mouths, and MT. SHASTA, which I drive past every time I road-trip down from WA to CA to visit my parents. I’m not so sure about STEEP FINE which sounds a little “green painty” to me and TEAR-DOWNS as a noun is new to me.

This is the first I’ve seen of NSAIDS [Aspirin and ibuprofen, briefly] in a grid (the initials stand for non-steroidal anti-inflammatory drugs). What say you? Is this well-known enough to be crossword fodder? I’d say it isn’t, but I’ve been wrong before (a lot).

The theme is impressive, but I didn’t recognize a third of them. YMMV, of course. Strong fill, too. 3.8 stars.