This week, our answer is a six-letter noun. Is KAMALA or HARRIS? By the time I started working on the meta for this one, it was Sunday morning and I was extremely hungover from both beer and anxiety. So I got a little nudge that confirmed I was on the right track. I knew we were looking for something have to do the words starting with F in the themers, but I didn’t know what to do with the parenthetical enumerations. 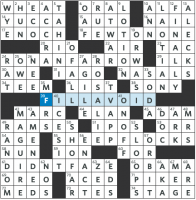 Turns out, the enumerations indicated another entry in the grid that I was supposed to connect to those F-words; the first one to click was RONAN FARROW (6) and RAMSES — because, of course, RAMSES was a PHARAOH (FARROW).

Take the first letters of those entries and you get FRAYS; apply the same extraction principle of F-word == PH-word to FRAYS and you get PHRASE, which is a six-letter noun and our answer.