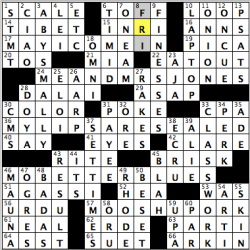 Hello there, everyone! Here is hoping that you’re doing well and, after what felt like the longest week of many of our lives, recovered from all the drama that was Election Day/Week!

Today’s puzzle is very similar to Monday’s New York Times’ offering, as we have a long-vowel-sound ladder featured at the starts of the five theme entries.

There were not too many moments in solving the grid that made me go BLAH (45D: [“Been there, done that” feeling]), though I was thrown for a loop with TOFF given that I don’t believe that I’ve ever come across that, even with my multiple times that I’ve been in London (6A: [Stylish gent, in London]). A good number of pretty long non-themed entries gave this puzzle even more crunch, with SET TIMES (37D: [Fixed appointment hours]) and FINESSES, something I do not specialize in, standing out (9D: [Handles tactfully]). ON CUE was sneakily good, especially given its clue (12D: [As expected, as an entrance]). Will definitely have to take the clue to ONION to task, only for the fact that I can not have a raw onion as a topping on my burger (11D: [Ring on a burger]). Cooked and/or caramelized, or bust for me! Here is hoping that getting this done now prevents me from being my usual night owl self and staying up until ONE AM, but I doubt it (7D: [An hour after midnight]).

“Sports will make you smarter” moment of the day: OMNI (18D: [Present opener?]) – The state of Georgia has been on a lot of people’s lips this past week, as it looks for all the world that the Peach State will turn blue and put President-Elect Biden over 300 electoral college votes. In 1988, the Omni Coliseum in Atlanta, the long-time home of the Atlanta Hawks, hosted the 1988 Democratic National Convention. The arena hosted some big sporting events as well, including the 1977 NCAA Men’s Basketball Final Four in which Marquette University — coached by Brooklyn native Al McGuire — won its only national title in McGuire’s last-ever game as a college head coach. The Omni also hosted the 1993 NCAA Women’s Final Four and, in the national championship game, saw Texas Tech’s Sheryl Swoopes set the record for most points in a Division I national title game with 47 points as Texas Tech defeated Ohio State. 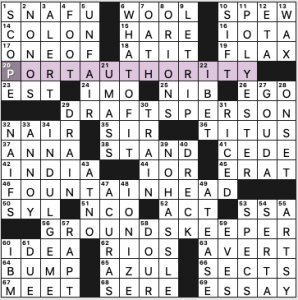 Beverages and those who serve them are the name of the game today, with familiar(ish) words or phrases clued as if they’re job titles. Except that two of them are job titles, in non-beverage circles, and the other two aren’t.

Fave fill: “WHAT OF IT?”, “INDULGE ME.” Less keen on crosswordese SERE quizzing Tuesday solvers, -IOR, ERAT, NO HASSLE, and a bunch of abbrevs (EST IMO SYL NCO SSA ETA). At least AT NO was clued as a partial rather than atomic number‘s abbrev … but it dupes both AT IT, NO-NOS, and NO HASSLE. No.

The theme answers end with things you raise, as signaled by the revealer, “RAISE ‘EM UP!” [Words before a toast, and what you can do to the ends of the starred answers]. 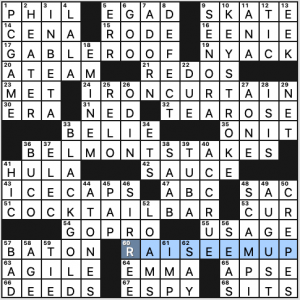 Each raise phrase is easily in the language, and I love the consistency in that they each require the use of the definite article (as opposed to phrases like “raise a stink” or “raise an eyebrow”).  Very smooth. However, I’m less sure about the revealer. It just doesn’t feel as in-the-language as everything else.

I also had trouble with the fill which leaned unusually heavily on crosswordese like ELEC, RELO, A-ONE, BUCO, ETS, EGAD, and awkwardly plural REDOS. We’ve seen most of these many times before, but taken together, it was noticeable.

My other trouble spot was the cluing in that SE corner which seemed unusually thorny for a Tuesday. I didn’t know [Bursa, e.g.] should give me SAC, and that crossed with a proper name I didn’t know, AUGUST [Playwright Strindberg]. The clues for USAGE [Established procedure] and SITS [Doesn’t appear in the lineup] felt quite opaque as well. I mean, it’s Tuesday; how about a clue for AUGUST that’s not a turn-of-the-20th-century Swedish playwright?

Aside from my struggles there, BLACK GOLD is great, and KEYSTROKE is nice with those scrabbly Ks. TEA ROSE, ICE CAPS, GOPRO, and EMINEM are the other long assets.

Not my favorite Gary Cee puzzle, mostly due to ancillary issues, but I enjoyed the theme just fine. 3.4 stars.

Looks like a debut for Chris Gross! An excellent one at that- congrats!

THEME: Types of soup can be found backwards (or in this case, south to north) in common phrases. 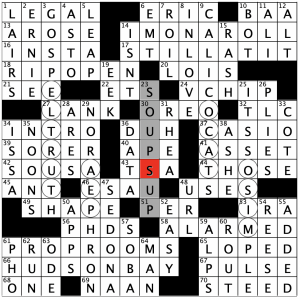 This is the ideal hidden word theme- all themers are solidly in-language, the hidden words are hidden across multiple words, the theme is consistent, and although I’ve never had TACO soup (or TURTLE soup!), all of the soups are familiar. Also, the revealer could not land more solidly.

I guess CHICKEN NOODLE is hard to included backwards in a common phrase?

It’s been a while since I’ve had an under 4-minute time for a Universal, but the smooth fill offered by Chris and CC coupled with the sleek keyboard that came with my new Macbook made it happen.

There is, of course, one big problem which has nothing to do with the construction. I was fortunate enough to solve with circles included since I downloaded the puzzle from this site. The masses will be solving sans circles (either in print or on the webapp), and are likely to have a different experience since the visual element is lost and they are asked to count squares backwards and mentally circle them. While I was able to catch on and appreciate what was happening mid-solve with the letters being circled, I am not likely to have seen the soups until post-solve had I been solving in the format that Universal offers most people.

I hope the fix is coming soon, because this is a wonderful puzzle that may not be fully appreciated as it could be by some solvers. 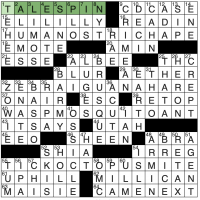 I found this one a little thornier than normal in a couple of spots; other areas were a breeze. And how is the word SPIDER not in this puzzle?? Here are the theme answers:

See what I mean? The OCTOPUS is obvious, but no SCORPION or SPIDER in the last theme entry, but I’ll bet a lot of that has to do with squeezing in 4 15-letter entries! Well done, if you’re OK with the creepy crawlies present in this puzzle! A solid 4.5 stars, and tons of nominees for the Obscure-Pop-Culture-Reference-of-the-Week, which has been missing for a few months!

I will stop there. Another new Jonesin’ next week! 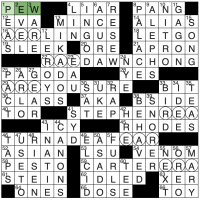 What? No revealer? Evidently not, since it really isn’t needed! Our theme, which is played out in the circled squares, is all six ways to arrange the letters A, E and R.

One small nitpick: All of these are actual words, except for the entry for EAR, which should arguably be the easiest to clue! The sequence EAR is hidden in the word FEAR, and while the theme is consistent, it is missing that small tinge of excellence. And now you see why there is no revealer; what would it be? JUMBLED HEARING, or something even sillier? Plus, there are already a solid SIX theme entries in the grid, so no worries. there. Very nicely done, Jerry! 4.1 stars.