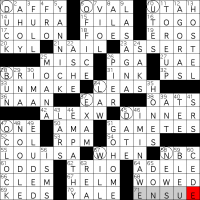 hello and welcome to episode #649 of matt gaffney’s weekly crossword contest, “Look Both Ways”. i solved this week 1 puzzle without the instructions, as is my wont. what are the theme answers?

well, there are no long answers in the grid. that makes for a very high word count (84). is there anything else going on? i noticed right away that the clue for 1-across, {Cartoon character in the “wabbit season” arguments with Elmer and Bugs} DAFFY, seemed to be related to the answer for 1-down, {“Get your head down!”} DUCK. and indeed, that was the key—in ten different places in the grid, where an across and down clue share a number, the across clue can be answered with a two-word phrase that combines both answers:

taking the letters in those squares gives DOUBLE DOWN, an apt phrase that obviously must be the meta answer. checking the instructions, they appear to ask for a 10-letter phrase, which fits the bill.

this is a very cool meta that i really enjoyed. but gosh, it seemed awfully subtle for a week 1, which typically has a theme so obvious you can’t miss it. there would have been ways to make this one really obvious, easy enough for a week 1, but they also would have made it a lot less enjoyable to notice. as a dumb example, *ing all the special clues would have enabled a solver to just read off the letters to get DOUBLE DOWN without even noticing how the theme actually works. a slightly more sophisticated presentation would have been to just omit the clues for those ten down answers (DUCK, OFFICE, etc.). that would have made the theme more obvious, but even somebody who didn’t notice it could still arrive at the answer. i very much prefer the actual meta, but perhaps it could have been saved for a week 2.

let’s talk about the construction for a moment. there are no fewer than twenty theme answers in the grid. they have to be in ten alliterative pairs, sharing a starting square, and arranged in order in the grid to spell out the meta answer. that is a tremendous constraint—which explains why the word count is so high. in the center of the grid, the themers LEASH / LAW and EAR / EXAM even overlap, necessitating the weird answer {Harvard lecturer ___ Corey (whose name includes a middle initial and who isn’t nearly famous enough to be in a crossword but I really needed this entry to make this grid happen so just work with me here)} ALEX W. there are two other, less restrictive intersections at the E’s of BRIOCHE & OFFICE and DATE & WHEN.

from a purely architectural standpoint, it would have been more elegant if the ten theme pairs had been the only places in the grid where across and down entries shared a clue number. as it is, in this grid we also have 25 MISC / MOANA, 26 PGA / PIER, and 51 GAMETES / GO HOME. while i’d love to see a double-duty clue for both GAMETES and GAMETES GO HOME—something like {Exasperated cry from one who’s fed up with spermatozoa and ova}—i can understand that the grid was already viciously constrained. i’d bet a pretty penny that matt started out the construction with the intent of having only those ten pairs, and just couldn’t make it work. overall, i’m very glad we got what we did get!