Our theme is precipitation homophones. The revealer is NAME DROPS (59a, [Shows off one’s connections, or what you’ll do by speaking the starts of 17-, 28- and 43-Across]). The clue argues that by speaking such homophones, we are “naming” drops, i.e. we are identifying what that precipitation is. I’m not sure I quite buy that, but we’ll just go along with it. 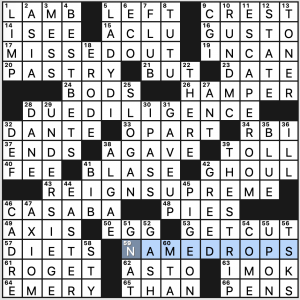 I didn’t grok the theme before I finished the solve, so it didn’t help me out much. With DROPS in the revealer, I was expecting something to either be omitted or turned downward. When I finally had the aha moment, it was less “aha” and more “okay.”

Really nice long fill with BEST BETS, ESCAPE ROOM, UNDER SIEGE, and THE STRIP. The short fill is remarkably clean as well.

The theme didn’t wow me, but it works. Good fill and cluing though. 3.6 stars.

Can’t leave here without revisiting one of the great music videos of the ’80s. Enjoy! 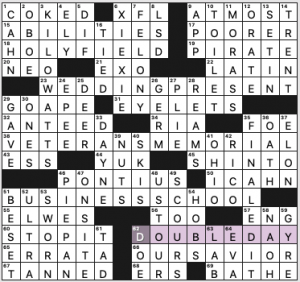 I didn’t much care for this one. It started out with an unexciting 1a/1d crossing (1a. [Converted into fuel, as coal], COKED and 1d. [Sammy with four Oscars], CAHN—with COKED also crossing Ron ELY; COKED would have been easier if clued in relation to someone who is coked up, on cocaine), and then the theme wasn’t much fun to wrangle, and there was more iffy fill along the way. Theme revealer: 62a. [Big name in American book publishing for 120+ years … and a hint to the answers to the starred clues], DOUBLEDAY. The starred answers are one- or two-word things in which each part can precede “day” or “Day” in familiar phrases:

How many of you figured out the theme angle before reaching DOUBLEDAY? I sure did not.

Worst crossing: 6a. [Former gridiron org. for the Memphis Maniax and Orlando Rage], XFL / 6d. [Mandarin “thank you”], XIE XIE. Defunct/failed sports abbreviation meets foreign phrase that’s less commonly known by non–Mandarin speakers, I’d wager, than ni hao. The 2001 XFL had 8 teams in 7 states, and its one and only season lasted 3 months. McMahon tried to revive it this year but COVID.

Worst entry: 32a. [Paid to play: Var.], ANTEED. Never seen this purported variant before. If your grid includes this, please backtrack and redo some fill. Also underwhelming: EXO, RIA, ESS, ICAHN (less irksome if CAHN isn’t across the way, somehow), ENG, HOBS (54d. [Goblins, in folklore]), NAOH, and GYRE clued as a verb (it feels much more familiar as a noun, as in the North Pacific Gyre full of floating trash).

2.5 stars from me, mainly because of the fill issues.

I very much enjoyed this puzzle by Elizabeth C. Gorski! Excellent marquee grid-spanning entry, some other fun long entries, and a clue that made me laugh out loud right at 1-A. Nailed it! 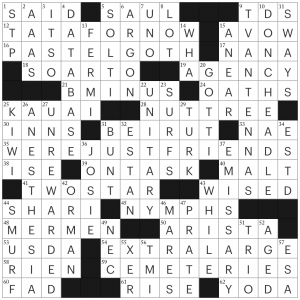 I *loved* WE’RE JUST FRIENDS through the middle. The clue translation [“I swear, there’s nothing going on between us!”] is just perfect, and i was able to enter the full 15-letter entry with barely any crosses. Other fun (or otherwise notable) long entries were: TATA FOR NOW / PASTEL GOTH / DON CHEADLE / ANESTHESIA (among other long entries, but highlighting these four). I would expect to see “TTFN” in grids more frequently than we do, so having the full phrase is a nice subversion of (my own) expectations.  More on PASTEL GOTH below. I love DON CHEADLE and the fact that he was both [Paul Rusesabagina’s portrayer in “Hotel Rwanda”] and also War Machine’s portrayer in “the Avengers.” The range!!!! Finally, loved the clue on ANESTHESIA [Knockout on “Grey’s Anatomy”?]. Excellent fake-out!

Overall, tons of stars from me for a fun, quick solve. I’m out on Friday because I’m observing absentee ballot counting in my district, so someone else (!!) will be writing up Friday’s New Yorker. Happy Veteran’s Day, and thank you, to those who serve/d. See you next week! 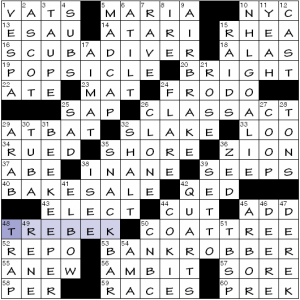 A selection of individuals who were wearing masks before it was cool. And by cool, I mean as a reasonable method of limiting the spread of a pandemic-level virus.

In fairness, none of their respective masks will help against COVID-19. Except perhaps with the exception of the BANK ROBBER, if it was, say, a classic bandana style rather than a rubber disguise job.

More critically, that themer is also exceptional in that its clue is cutesy-question-marked. Even though I like the punniness of it, I’d prefer it were a straightforward one, same as the other three. Further muddying the water is the longish and nearby-ish 40a [Attempt at making cookie dough?] BAKE SALE. 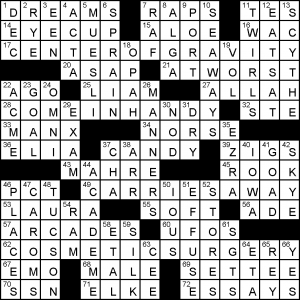 Today’s theme concept is quite basic: a CANDY centre, and four other across answers that are C… …Y; the theme entries themselves are also more functional than full of flair: CENTEROFGRAVITY, COMEINHANDY, CARRIERSAWAY and COSMETICSURGERY.

A few other notables, though in the main the puzzle was, as the theme, basic: 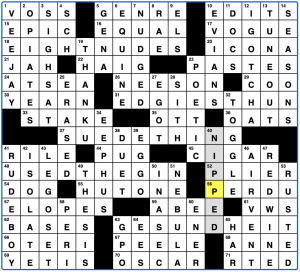 Happy Wednesday!  This week’s AVCX is from Julia Tringali Golden and I should have paid closer attention to the title of the puzzle this week, “Mixed Blessing”:

I kept trying to figure out what common modification was being applied to phrases, but it turns out I was overthinking the connection between these clues:

Yes, EIGHT NUDES, EDGIEST HUN, SUEDE THING, and USED THE GIN are all anagrams of GESUNDHEIT.

Ariana Grande’s “THANK U Next” was the album clued at 19D, but Alanis Morissette also had a single by that name.