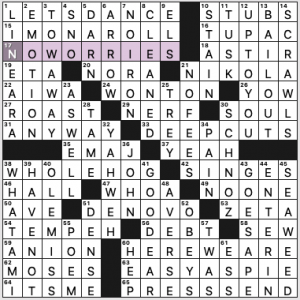 The constructor’s notes at Wordplay tell us that Sawyer’s prior puzzle was a marriage proposal for a solving audience of one (she said yes, they’re married now!), and now he’s teamed up with seasoned constructor Ashton on a themeless. It’s a really nice themeless, too, and should get your Friday the 13th off to a lucky start.

I need to be brief here (always a challenge for the wordy) because I haven’t played medication mancala yet (the filling of the pill organizer for the next two weeks) and it’s almost bedtime. Fave stuff: LET’S DANCE, Wikipedia STUBS, “I’M ON A ROLL,” “NO WORRIES,” DEEP CUTS, WHOLE HOG, TEMPEH, PRESS ‘SEND,’ casual “UP TO YOU,” NORA clued via the Awkwafina show (which I still HAVE NOT watched) and more.

4.5 stars from me. Hope to see more puzzles from these two! 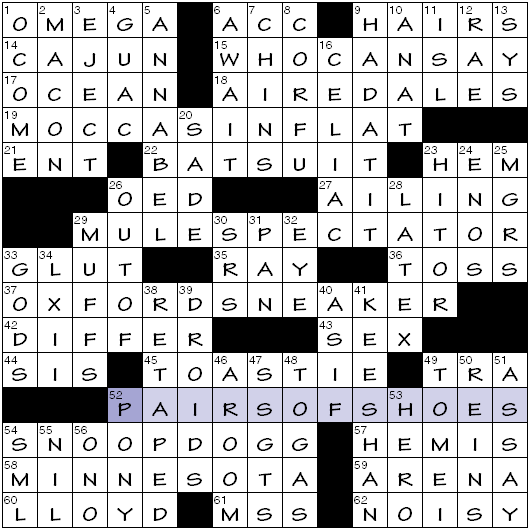 This is a well-established theme type, and the revealer is exceedingly literal (which is fine).

Slightly distracting is the crossing of 45a [Brit’s grilled sandwich] TOASTIE and 38d [Did a trainer’s job] RETAPED. The former was obscure to—but not completely unheard of by—me, while the latter was vague enough that it was far from clear that we were talking about physical therapist/coach type person. Primed to be thinking of Briticisms—and aware of the theme—I was preoccupied by their term for SNEAKERs.

Each theme answer ends in a word that is a part of SECURITY SYSTEMS [Protective setups suggested by the final few letters of 17-, 27- and 50-Across].

I don’t think I noticed the title of the puzzle until after the solve. When I did, I felt it tied everything together nicely and was even good for a little chuckle. The only nit I’d pick is that keys and locks go together, leaving video out on its lonesome. And there are other implements that could be employed (sensors, cameras, alarms, etc.), though getting them to work with this theme would be difficult if not impossible.

Fill highlights: HENHOUSE, TROTS OUT, and TAKES TEA [Has an afternoon meal]. I lived in England for a few years and it took a while for me to understand that they use the word “tea” for “dinner.” Q: “What are you having for tea?” A: “Bangers and mash.”

TITLISTS [Champions] is not the golf ball (that’s spelled “Titleists”) but I’m immediately reminded of the Seinfeld scene where George recounts his whale-saving adventure. Some trivia about this episode: The preceding scene where George walks into the ocean was supposed to be the end of the episode, but it didn’t get much of a laugh from test audiences. The final scene was written at the last minute by Larry David and Jerry Seinfeld, and Jason Alexander delivered it perfectly in one take without rehearsal. It remains one of the iconic moments (for me, anyway) of the show. “The sea was angry that day, my friends, like an old man trying to send back soup in a deli.”

The rest of the fill is quite clean and the cluing straightforward making for a speedy solve. 3.5 stars. 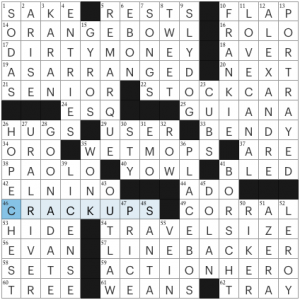 Hello! It’s Amy filling in for Rachel, who is being a good citizen today and volunteering for some election-related duties.

I’m seldom expecting a themeless puzzle to fall in a Tuesdayish amount of time, but it’s amazing what a difference the cluing can make. The grid’s a bit heavy on proper nouns (people and some places), which often means it’s a breeze for me but others may get mired down, particularly where names intersect.

Did not know: 38a [“The Battle of San Romano” painter Uccello], PAOLO.

Fave fill: BENDY straw! DIRTY MONEY (raise your hand if you started with DIRTY LUCRE, though now I realize “filthy lucre” is more familiar), LINEBACKER, ACTION HERO (did you know Gal Gadot did some of her own stunts in the Wonder Woman movies? and that the Wonder Woman 1984 sequel is COVID-delayed but something to look forward to in 2021), HOPE CHEST, GO ON A DATE (do not sign up for the Goon-a-Date app, the guys are all terrible), “Grace and FRANKIE,” BORSCHT.

Not sure about 46a [Nervous collapses] as a clue for CRACKUPS. Does this marginalize people who have breakdowns or is it fine?

Not wild about the entry AS ARRANGED. Doesn’t feel natural to me.

I’m SO sorry I missed this on Thursday evening! It showed up in some other part of my Email box and I didn’t see it. I’m glad I found it because it’s a fun themeless. Here’s the grid. Neither of the constructors is in our database, so I’m guessing this a debut. Can’t wait to see more from this talented pair! 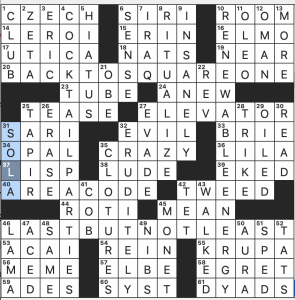 I really enjoyed this. I got hung up in the middle of the east section because I’ve never seen READ used in this context – the clue is [Wittily disparage, to a drag queen]. And I didn’t remember the name of Marilynne Robinson’s third “Gilead” book (LILA), which I haven’t yet read. Loved the first two.

It’s a fun grid with four 15s, all lively – COCKTAIL PARTIES, BACK TO SQUARE ONE, RENEWABLE ENERGY, and LAST BUT NOT LEAST.

What I didn’t know before I did this puzzle: see above re: drag queen slang. I’ve also never heard of Icona Pop. They appear in the clue for DYADS.