Hey! There’s a new monthly crossword contest to check out. It’s part of the Beyond Wordplay newsletter (scroll down). This first one has a contest deadline this Sunday, so click through, download the puzzle (.pdf or .puz), and see if you can get the meta answer. There’s also a link at the top of the newsletter for subscribing via email. So far my only exposure to Beyond Wordplay has been this past Tuesday’s episode of That Word Chat, featuring BW mavens Ben Zimmer, Allegra Kuney, and Eric Chaikin. They had a few games for people on Zoom to compete on—I was a contestant in the spoonerism game and was tied with Dave Shukan till the last one! Ach, I did not go on to the finals. Tyler Hinman won the finals. I loved the various wordplay puzzles Allegra, Eric, and Ben wrote for us. Haven’t had a chance to do the contest puzzle yet—need to blog the Saturday NYT first!—Amy 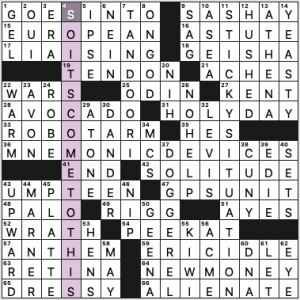 Oh, hey! Emily Carroll constructed this past Monday’s Boswords Fall Themeless League puzzle and I loved it. Also enjoyed hearing from her (and this week’s featured solver, Ric Quiñones) in the Twitch stream after the puzzle. Emily’s Boswords puzzle took me twice as long as this one—those “Stormy” level hard clues don’t mess around!

This grid’s got a big “H” of 15s anchoring everything: the foreboding and regretful “SO, IT’S COME TO THIS,” a STICKY SITUATION, and MNEMONIC DEVICES. I sure did not recognize the mnemonic in the clue: [“My Violent Evil Monster Just Scared Us Nuts” and others]? Yeah, when I was trying to memorize the order of the planets, we still counted Pluto, and I stuck with my grandpa’s pronunciation of “SUNP” to remember Uranus was closer than Neptune.

The only entry on my “nope” list is 8d. [“I swear!”], ON GOD. This doesn’t feel at all like something people say, but that’s just what I know from my experience. Could well be a common bit of colloquial speech in other settings.

Four stars from me. Enjoy your weekend!

Well, I’m familiar with young Daniel Larsen’s puzzles, but The Wave Learning Festival Crossword Class is new to me. My curiosity is piqued. I’ll be googling shortly.

THEME: Phrases where the last word is related to GYMNASTICS. 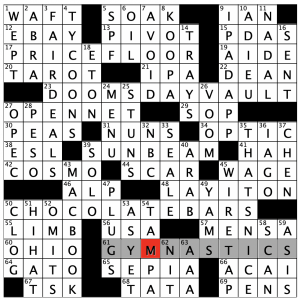 I read the title first, like a good solver should, and it totally messed with me! I thought it was going to be a theme where a word in the answer can follow “Gold.” And it sorta works? Like, I dunno…. GOLD VAULT? GOLD SUN? GOLD BARS for sure! I thought Man! That’s a stretch! So the revealer was a relief. Quite satisfying to uncover.

PRICE FLOOR and DOOMSDAY VAULY are new to me. The latter seems oddly specific when juxtaposed with generic CHOCOLATE BARS.

Good puzzle all around.

Oh wow! I’m so glad I looked up Wave Festival. Check this out (from the home page):

Wave was founded to address the educational inequities exacerbated by COVID-19. As the coronavirus pandemic continues to disrupt traditional educational opportunities for students worldwide, we hope to continue our work by offering nontraditional seminars, curricular tutoring services, and hosting speaker events.

We hope that this fun and diverse programming will keep students engaged and curious as they continue their education from home. For a few hours every week, students can tune into Wave and focus on something they love.

It appears as though it is run in large part by students.

Love that it produced a crossword. 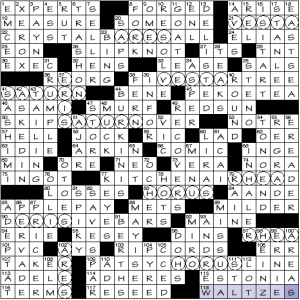 Were I to guess, I’d say the theme derived from the title phrase rather than vice-versa.

The names of gods are inserted into base phrases—meddling in human affairs!—sowing chaos and ruin. Well, just wackified new phrases. So it’s more metaphorical than metaphysical. Further, these gods also appear as standalone entries, often but not always relatively nearby to their host entries.

(I’ve marked up the grid with circles for all the relevant parts.)

These are clever, well done, and at least moderately entertaining. The grid is quite clean, considering that there’s a lot of theme material floating around. As alluded to before, aside from the vertical ERIS and ARES, most of the deities are in the neighborhood of their “interventions”. 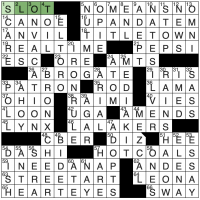 My friend Kyle has today’s LAT challenge puzzle. There are quite a few timely clues/entries in this puzzle, which may or may not be by design, but at least I found that to be the case. A little thornier than usual, and I had a misspelling/brain cramp/error in the grid that also slowed me down (see below). But lots of lively stuff, and a few entries that made me smile! 4.6 stars from me today!

Some comments, which may heavily feature some of the longer entries in the grid:

That’s all for now! Off to do more puzzles! 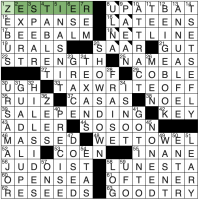 Not too bad on this Stumper! I had some minor issues in the NE corner of the grid, as you can see by the error marks. I did not know 15A at all (see below), and this is usually my issue with themeless puzzles: I get to some 6 or 8 square block that I have no idea what to put in them. This happened on my live solve during Boswords, which cost me a good minute on time, although in the end the solve was correct. I had 3/4 of this puzzle solved in about 8 minutes, so I had visions of an under 10 solve, but it was not to be. This Stumper ended up stumping me in the end! 4.5 stars from me today.