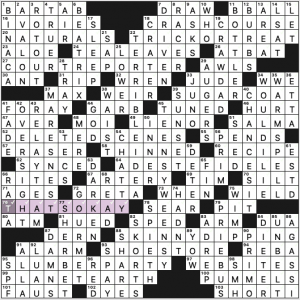 I wasn’t expecting to see Caitlin’s byline again so soon—she shared credit for last Sunday’s NYT. This time around, it’s a jumbo themeless. Is this the second themeless Sunday NYT this year? I feel like it hasn’t been very long since the last one. (Also, I want a comma in the puzzle’s title.)

Some people grouse that a 21×21 themeless is just a big slog, yes? I enjoyed this one, though, a good bit more than most themed Sunday puzzles. The fill had plenty of sparkle and a number of clues made me smile.

The title seems to be what Trump is trying to do since losing the election. But instead of legal action, this puzzle simply changes Ls to Ws for humorous effect. 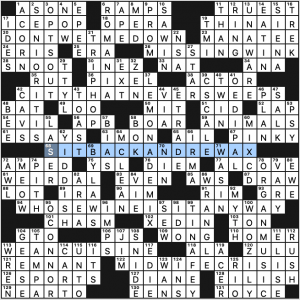 I loved these. They all flowed so naturally and had great surface sense. For the most part, the cluing was spot on, and helped seal the deal with humor. And this looks like it’s a debut from this constructor which makes it all the more impressive. Super job!

I’m impressed with this fun debut! Hope to see more from this constructor. Four stars.

THEME: A letter is repeated four times to create a wacky phrase. 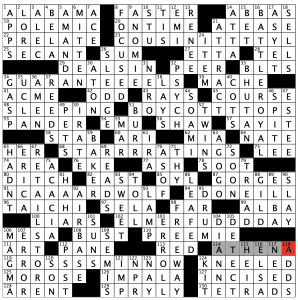 While this wasn’t my favorite WaPo ever, I was right on its wavelength from the title. I knew I’d be looking for four letters, and as soon as I saw the T repeated as one of the letters in the third themer, I sensed the repeater would spell TETRADS. In other words, yay me. Hehe.

The phrases all embrace the Birnholzian go-big-or-go-home wackiness, but I think the absence of a base phrase behind the themers took some of the satisfaction out of the wacky enjoyment for me. Also, some answers seem to highlight the letter being repeated (D-DAY, S.S., R-RATING) while others don’t (EELS, AARDWOLF). That threw me a little.

That being said, the TETRADS reveal was quite nice.

Also, if you (like me) wouldn’t be able to identify an AARDWOLF in the wild, here you go (I can’t tell if it’s cute or hideous): 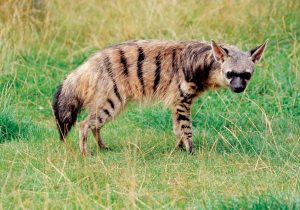 Have a good rest of the weekend!

THEME: Adding an extra E to a common name/phrase, and changing a word with a short sounding vowel to a long one- clued wackily. 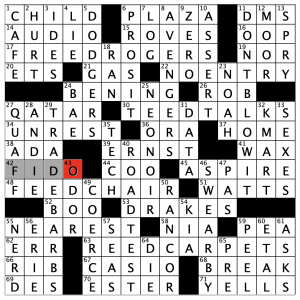 Took me a while to get cooking on this one. Kept flailing about. Brain working in Slo-Mo.

This one was just fine. The theme answers didn’t land as solidly for me as CC’s puzzles typically do. Perhaps because only the first part of each of the altered phrases is clued differently rather than the whole thing? TEED TALKS in particular felt like a stretch.

I got really hung up on NOAH. I don’t quite get the clue [Man with two dogs?]. Like, I understand that NOAH would’ve brought two dogs aboard the ark, but usually question mark clues are a play on words. Is it a play on a phrase that I’m missing?

Liked DON’T BLOW IT! and the quirkiness of TRADE BARBS. NEO NOIR was new for me (that’s a funny sounding sentence). 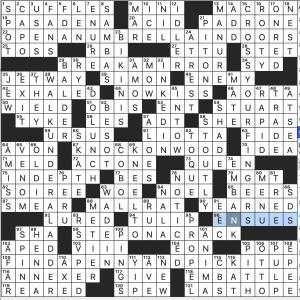 Since it was a pretty blah theme to start with, three entries that made me frown is too many. This is somewhere between “meh” and “feh” on my personal rating scale.

What I didn’t know before I did this puzzle: see above re MACRON. I also did not know that Ray LIOTTA co-starred in “Narc.”