That may be my fastest time ever for a Monday puzzle (or any other, obviously). It played like an easy themeless for me – I had no idea what the theme was until I went back and read the revealer after I finished.

We have five theme entries + the revealer. Lots of theme material for a daily puzzle. 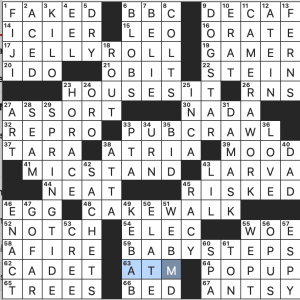 And the revealer: 59a [Small advances…or the progression suggested by the ends of 17-, 23-, 33-, 41- and 48-Across]: BABY STEPS. Babies ROLL, SIT, CRAWL, STAND, and then WALK. Solid, consistent theme and well-pitched for a Monday. Not of lot to make me frown, although we do have that old chestnut ESPY.

What I didn’t know before I did this puzzle: that HORACE said “seize the day.” 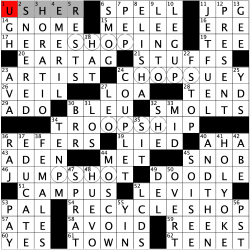 We’ve got an anagram theme, and a very consistently executed one. 54A, the revealer, tells us what’s going on: “Earth-friendly retailer…and a hint to the circled letters” is RECYCLE SHOP. And if you go to each theme entry, you’ll find the letters of the word SHOP “recycled” in four different permutations. In each case, the circled letters are split across the two words of a two-word phrase.

As a former binge-watcher of early-season 24, I was glad to see ELISHA clued as the Canadian actress rather than as the Biblical prophet (yay for lady ELISHAs!). Mount HOLYOKE and director AVA DuVernay bring a little more womanly energy to this puzzle, which I appreciate. 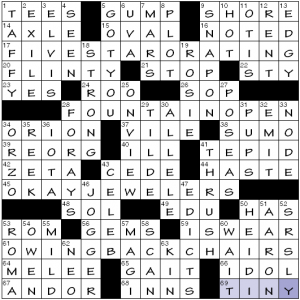 Basic theme here, the simple insertion of the letter O at the beginning of one of the words in the theme phrases.

No other Os in these entries. I notice, too, that the first two themers have the prefixed O on the last word, while the final two use the first word.

This would have been significantly more impressive had the letter O been BANISHed (2d [Exile]) from the rest of the grid as well, but likely that more challenging constructing constraint would have created a puzzle too tough for a Monday.

Kind of a slight puzzle, but still worthwhile. 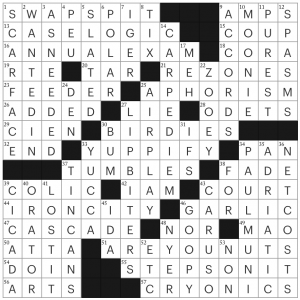 Hellooo I have returned from doing my civic duty and attempting to count absentee ballots (while *some* people tried to have them thrown out despite their compliance with New York’s new ballot rules, not naming any names, state senate republicans…). Thanks to Amy for covering!

Today we have a challenging puzzle from Kameron Austin Collins, and it definitely took me longer than your average Monday New Yorker, despite a couple of gimmes. Those gimmes included the APHORISM CARPE DIEM, which was only a gimme because of the New York Times crossword, in which CARPE DIEM was in the clue for HORACE. Fun coincidence! The other gimme (for me and other southwest Pennsylvanians) was IRON CITY, which is pronounced ARN CITY (see the Pittsburgh Dad IRON CITY commercial below). Other than those two, a lot of this puzzle was a battle for me, but it was a good fight.

This puzzle only had a few long entries (ANNUAL EXAM, CASE LOGIC, ARE YOU NUTS, STEPS ON IT).  ARE YOU NUTS and its clue [“Uh, crazy much?”] are a bit stigmatizing, and I prefer to avoid clues/entries that make light of mental illness, but they are also good colloquial translations (consider this the “representation” note of the day). The main appeal of this puzzle, though, is not in its long entries, but in its crunchy medium fill throughout. I loved SWAP SPIT [French], APHORISM, GOOPY, WANTED IN, BIRDIES, AS NEEDED, LIP BITERS, and YUPPIFY. I’m not 100% sold on these last two being real things, but I also 100% do not care, they are fun and the clues work.

Overall, tons of stars for a crunchy puzzle stuffed with excellent clues. See you all on Wednesday. 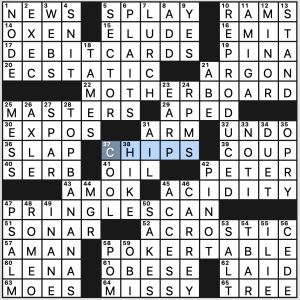 I’m fairly certain I’ve seen this theme or something similar in the past. A few nits: PRINGLES CAN doesn’t feel as in-the-language as the others. I can live with that, but worse, a chip in a debit card is a microchip, just as might be found on a motherboard. It’s clear the aim of this puzzle is to highlight different uses of the word “chip,” but those two are too similar (in my book). Possible solution: Find a way to reference the old TV show.

The fill is mostly nice, though. REPRODUCED is more workmanlike, but TOP BANANAS is fun as is the symmetrical pairing of ECSTATIC and ACROSTIC as well as timely MASTERS. 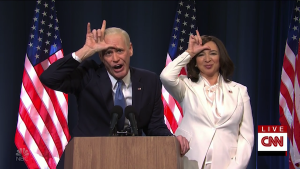 One clue of note: 46d. [Biden’s portrayer on “SNL”]. Jim CARREY. I’m guessing he’ll keep on in this role for the next four years.

Decent fill, but a few problems with the grid. 3.25 stars.