This week’s answer is a three-word phrase. 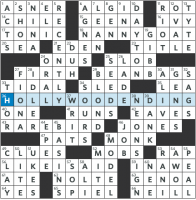 There’s one grid-spanning themer in the middle:

And there’s a bunch of similar entries — five-letter movie star names, placed symmetrically in the grid:

Those don’t seem to spell out anything interesting, but look! There’s another hint, also placed symmetrically in the grid:

There are TITLEs in the CLUES, the marquee is HOLLYWOOD ENDING, and the title of the puzzle is “Closing Credits.” I’m going to guess the mechanism has something to do with the ending or closing of the credits in those movie titles in the clues.

And lo, the last letters of those movie titles — ElF, ThelmA anD LouisE, ApartmenT ZerO, CobB, HoteL RwandA, JurassiC ParK — spell out FADE TO BLACK, which is a three-word phrase and our answer.