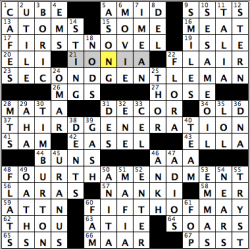 Good day everybody! Here is hoping you’re all doing well as we inch ever so closer to the holiday season! Already?!?!

Today’s puzzle is fun with ordinal numbers, as the five theme entries, starting from the uppermost one and proceeding downward, starts with an ordinal and counts upward as we proceed further down the grid. I’m sure once 23A became more than just a possibility after Election Day/Week/Eons, the grid officially a go! (Though I guess “second in command,” a 15-letter entry, could have been in the bullpen warming up in case those election results went another way.)

I’m sure some might nitpick about the first theme entry being just a fact and not necessarily being an actual phrase or distinct title/thing, especially compared to the other four. But I have no issues with that. Not only do we have the Second Gentleman reference, but, if reimagined, we see the abbreviation of the state long represented by the President-Elect in DEL (8D: [Singer Lana ___ Rey]). Only clue I really struggled with and needed the crossings was NANKI (57A: [___-Poo (“The Mikado” character)]). Lots of women in entertainment, real and fictional, in the grid, with ANITA and one of her hits from her landmark album being my personal favorite (50D: [“Sweet Love” singer ___ Baker]). Speaking of that album, Rapture, having “Sweet Love,” “Same Ole Love,” and “Caught Up in the Rapture” all on the same LP makes it one of my top few albums of the 1980s! Definitely a living legend with an unmistakable voice!

“Sports will make you smarter” moment of the day: SAM GASH (41A: [“Skyfall” director Mendes]) & (39D: [Wound that may need stitches]) – Former NFL fullback Sam Gash was a two-time Pro Bowl selection, in 1998 and 1999 while a member of the Buffalo Bills, who was selected to the All-Pro Team (best player at his position) in both of those seasons. The honors he won in 1999 is particularly memorable because, in that year, he became the first back to ever make the Pro Bowl without a rushing attempt in that season. Gash, who was drafted by the New England Patriots in 1992 and spent his first six seasons in Foxboro, won a Super Bowl as a member of the Baltimore Ravens in the 2000 season. 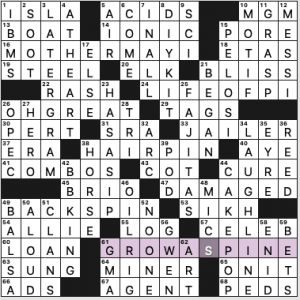 We’ve got a progression theme, adding a letter at each step to form a 5-letter word. How do you GROW A SPINE (61a. [“Show some courage!” … as this puzzle’s theme can do?])? You start with an I, add a P for PI, then an N to make PIN, an S for SPIN, and finally an E for SPINE.

In classic crossword fashion, our theme today consists of two-word phrases whose second word can mean something else. In this case, each one can mean “dispute” in other contexts, and thus our theme entries are clued wackily. 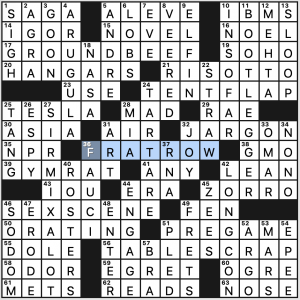 This works really well and each theme answer is well-chosen. Even knowing what the theme was, the entries were still fun to uncover as I progressed down the grid. The whole thing feels consistent and entertaining throughout. Nice job.

Great fill, too, such as BOOTLEGGER, RISOTTO, ARUGULA, GYM RAT, SIR MIX-A-LOT, PREGAME clued as a before-party drink, and the LONG CON. That’s a lot of strong fill considering there are five theme entries to constrain things. Also nice to see man-of-the -hour Dr. FAUCI in the grid. 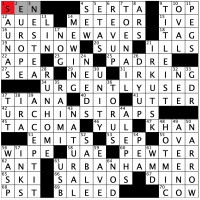 There is usually a “You Are Here” marker on a map in, say, a mall or at a theme park. With that in mind, I have no idea how Matt got the idea for this puzzle, since I am sure he has rarely been to either in 2020! I could be wrong, but this is still a clever puzzle, full of puns in typical Jonesin’ style:

So we have UR added to the front of some common phrases. Nice. Look up what a ban hammer is if you don’t know! Not too many obscure pop culture refs this week, so that I think lowered my time! 4:24 is just about as fast as I solve these puzzles. Not too hard of a theme either, so there’s that. A solid 4.3 stars today. 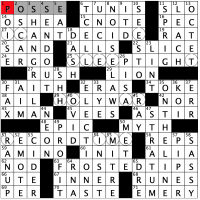 Not too difficult today, but it is Tuesday. This puzzle, probably a tad prematurely, puts cold weather in your thoughts. BRR!

I realize it is November, but I am not ready for cold weather!! Circles definitely needed this week so we can clearly see ice, sleet, hoar and rime hidden in the theme answers. And I would do frosted tips in my hair … if I had enough hair to work with! Solid puzzle, even if slightly depressing. 4.3 stars. 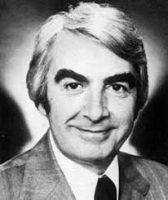 I really want the title to be “Internal Conflicts”!

THEME: Phrases that seem to contradict themselves. 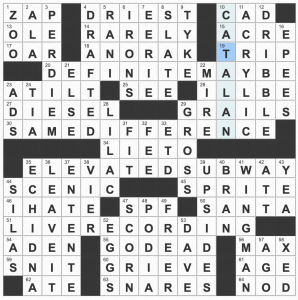 An odd looking grid to accommodate a set of four themers, all 14-letters in length. I enjoyed it, but don’t have much to say other than that! I have a wisp of a memory that is telling me I’ve seen this theme before, but that happens and will continue to happen

ECHIDNA is totally new for me. Sounds adorable. Currently teaching my dog LEAVE IT! He’s not doing too bad with it, depending on the value of the thing I’m asking him to leave.

I’m not willing to accept GO DEAD as a phrase. That seems silly.