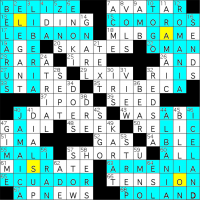 hello and welcome to episode #650 of matt gaffney’s weekly crossword contest, “Nothing But Neighbors”. although this is a week 2 puzzle, matt assures us it’s a week 1 difficulty, so i solved it without the instructions. what are the theme answers?

sixteen (!) different grid entries are the names of countries. i’ve highlighted them in blue in the screenshot. they are:

there are four countries in each corner of the grid. each group of four surrounds one square; those squares (highlighted in yellow), reading clockwise around the grid, spell LAOS, which must be the answer. looking at the instructions now, they specify that the answer is a landlocked country, which actually makes the meta even nicer, as the letters of LAOS are quite literally surrounded by the names of those other nations.

so this was certainly a week 1-easy meta, but what an ELEGANT {2d: Sophisticated} construction! yes, there are 200ish country names to choose from, but how remarkable is it to find four groups of four that interlock in pairs like that, surrounding one square in the grid? and then to go on and actually fill the grid around those super tightly constrained theme answers—in symmetric locations, no less!—without resorting to all sorts of crud? that’s pretty incredible. even just finding the TOGO/OMAN and MALI/IRAN pairs must have caused matt a frisson of delight.