Our theme consists of entries that BREAK A LEG (56a, [Encouragement to an actor, and what this puzzle’s starred answers do]). Each entry is a two-word phrase that has LEG spanning the middle ground. 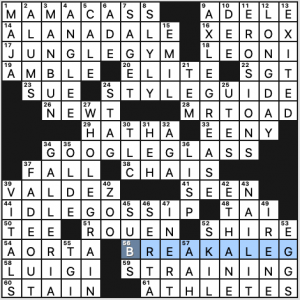 I’ll be honest here. I didn’t realize those two long Down entries were themers until I was writing this up. At first, I thought the theme was solid yet workmanlike with a standard four theme entries plus a revealer, but now I’m duly impressed since those Down entries cross two other themers. The fact I didn’t notice indicates that everything fits and flows together so smoothly. Very well done!

And I was also admiring those corners! It’s pretty unusual for a themed puzzle to have such massive stacks in the corners. Starting the puzzle off with a non-themed eight-letter-entry is a bold move, but aside from some minor nits (like the one noted below), it pays off well. I like MAMA CASS and MAN-BUN as well as “LONG DAY?,” MR. TOAD, GALLERIA, and FADE OUT. 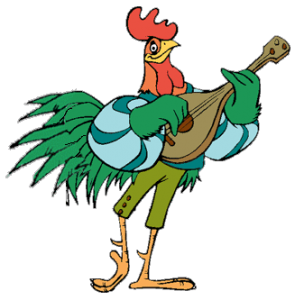 It was the crossing of ALAN-A-DALE [Character who narrates Disney’s “Robin Hood”] and CALE [John of the Velvet Underground] that nearly Naticked me. John COLE seemed more likely and ALAN O’DALE seemed feasible, too. But I must have that name somewhere in my little grey cells, because I guessed correctly. It was a near thing, though; go beyond Friar Tuck, Little John, and Maid Marian, and I’m going to start floundering. By the way, in the Disney film, the character is a rooster voiced by singer Roger Miller.

Clues were mostly of the straightforward variety, so I’ll close this by reiterating how impressed I was by this construction. Four stars from me. 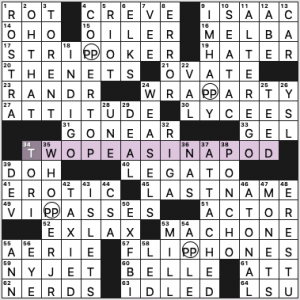 Quick recap on account of my foul mood. Theme is TWO PEAS IN A POD, with two P’s in four asymmetrically located rebus squares. The PP joins two words in the Acrosses but is within a single word in the Downs: STRIP POKER/COPPER TOP, WRAP PARTY/I’M HAPPY, VIP PASSES/WHOPPER JR, and FLIP PHONES/APPLE. The only other P’s in the grid are in the theme revealer. (Surprise! Rebus Wednesday instead of Thursday.) Solid theme execution.

Only knew CREVE Coeur, Missouri because my BFF spent some of her childhood there, but otherwise that is not the sort of partial name that you expect in a Wednesday puzzle. Nice to see TO RENT instead of foreign TO LET for a change … though FOR RENT would be much better. I like the MONETS since there’s an exhibit at the Art Institute of Chicago now … but the museums are closing down again because of COVID, oh well. More fill here that I wasn’t wild about, like NYJET, MACHONE, RANDR, EXFBI, YSL, ERES TU … meh. 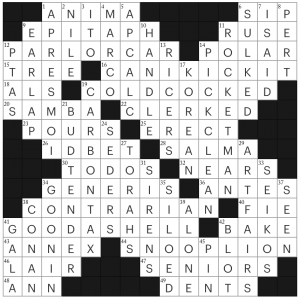 The grid design here is rad. I love that the New Yorker constructors have fewer qualms/constraints regarding “cheater” squares, letting them experiment with less traditional grid patterns like this one. It looks really cool! It also means there are lots of medium-length entries but no long ones. A few highlights include: ROCKET MAN, CONTRARIAN, CAN I KICK IT, GOOD AS HELL.

True to form, Natan packed this grid with pop culture/music/”New Yorker”isms. In addition to the Lizzo and A Tribe Called Quest references above, we also have SNOOP LION (Snoop Dogg’s temporary stage name after being “reborn” on a trip to Jamaica), Gilberto Gil/Seu Jorge, and ROCKET MAN. Really fun entries and clues all around! Some people struggle with/actively despise this style of puzzle, packed as it is with trivia and culture, but I think it’s good and important that the New Yorker showcases different styles, and learning about pop/culture outside one’s own bubble never hurt anyone!

Overall, plenty of stars from me! See you all on Friday. 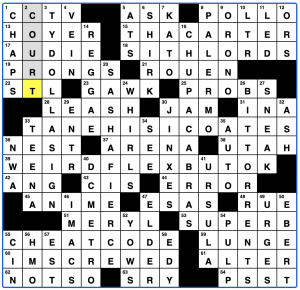 Happy Wednesday!  It’s a themeless week at the AVCX, with this week’s entry coming from Nate Cardin:

“Is that Beyoncé?!” Sort of. Her 2009 album introduced alter ego SASHA FIERCE, 20D in this puzzle.

I think this puzzle definitely merits its 4.5/5 difficulty rating (there’s a lot of fill where if you don’t know it, you don’t know it), but the crossings are fair in those slots, and I loved the personality in this grid. More themelesses like this, please, Nate! 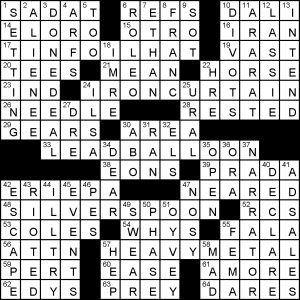 Today’s theme by Kurt Krauss is quite basic, but consistently executed. It is simply four HEAVYMETALS, all elements, but used at least somewhat metaphorically: TINFOILHAT, IRONCURTAIN, LEADBALLOON and SILVERSPOON.

Likely because of LEADBALLOON being a central 11, we get a heavily segmented puzzle with four chonky corners. None of those four have too much pop, however, with [Fait accompli], DONEDEAL is about as wild as things get today.

A couple of truly cringy clue/answer pairs [Spanish Olympian’s goal], ELORO. Would you accept THEGOLD clued in that way? Also – [Jazz drummer Cozy and a king], COLES is totally contrived; I do know it as an Australian supermarket; is that something Americans know, foreign supermarkets? 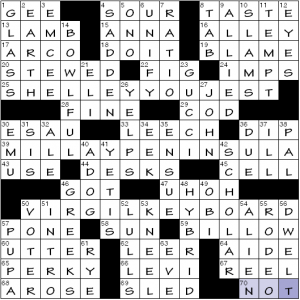