Theme: The prefix PER is added to well-known phrases. 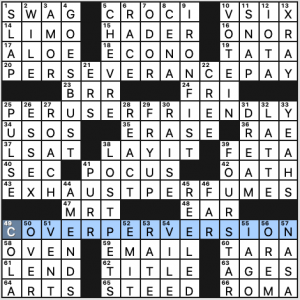 Mostly good, yeah? It’s not all entirely consistent, though. Two entries have pronunciation changes, and two don’t. And in two of them, the second word changes meaning as well. But I felt myself mostly entertained by the theme, so that’s a good thing. I like that they’re all grid-spanners as well.

Fill highlights: GOES BUST, LOST PETS, FOUR-STAR, and IRON FIST. I can vouch for FRY-UP [Brit’s breakfast, informally] which is a quick way to say a more substantial (and probably less healthy) meal than, say, a continental breakfast. Very similar to, but maybe less well-defined as a “Full English.”

I really lucked out by deciding to start today’s NYT with the down clues, since I hit the revealer for this week’s grid early on and immediately knew what to do with the rest: 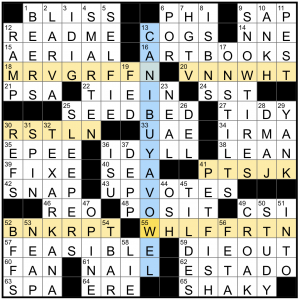 I say the approximate amount of grid space and somehow knew CAN I BUY A VOWEL would fit.  As that answer indicates, all of the starred across clues could use a vowel or two (or three):

Those answers are, re-voweled, WHEEL OF FORTUNE, which was created by MERV GRIFFIN, is co-hosted by PAT SAJAK and VANNA WHITE, gives out RSTLNE for the final puzzle, and has a BANKRUPT space on its wheel that’s bad news for your score if your SPIN (31D, “Turn in a popular game show”) lands there.  This was nicely calibrated – just enough of a tribute without going overboard on fill, and the 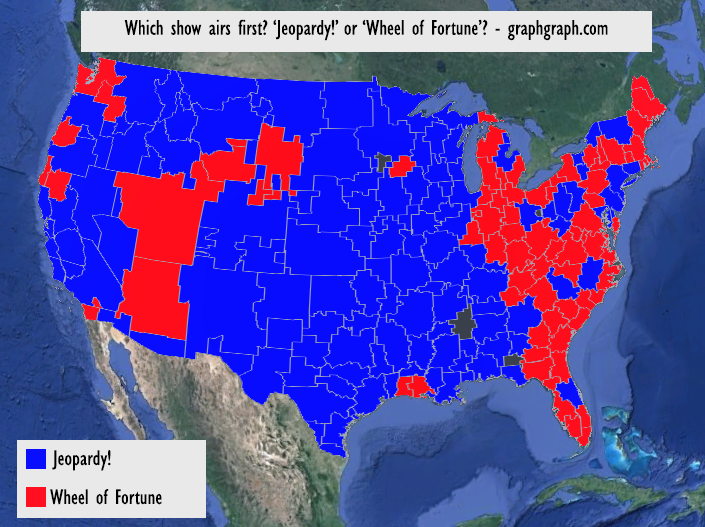 I had assumed the order of Wheel before Jeopardy! was standard across the country, but not so!  Apparently it’s more of an east coast thing.

As someone who has always lived in places with snow (MN, MA), it took me far longer than it should have to realize that WINTER O’S is indeed an apt anagram of SNOW TIRES. 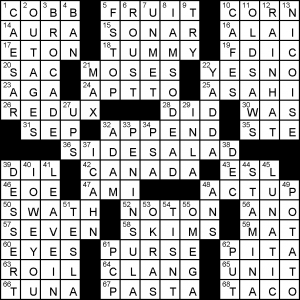 Is it just me or is Julian Lim’s byline been somewhat scarce of late? The design may have tipped some of us this is not a typical puzzle, as there are no obvious long corner answers in which to find the theme. Instead, there is a lone central SIDESALAD and the rest of the answer, as that implies is pushed out on the edges.

SIDESALAD made me think of Nando’s, which, here in South Africa at least, offers so much variety in their sides: chips, wedges, green salad, potato salad, cream of spinach, roast veg, pap & sishebo and several more. More side options! Where was I? Oh yes, eight answers completed by “___ SALAD” skirt the edges of the grid: CAESAR/COBB, FRUIT, CORN/NICOISE, POTATO/TACO, PASTA, TUNA/DESSERT. I was unsure of the last one, it seems to be the same as what we call bazaar puddings?

Anyway, filling these grids is no picnic, and that, as well as the limited scope for new wrinkles in the theme type itself, are why we rarely see them. You can witness the knock-on effect in the number of subpar short answers, however nothing is rarely rip-up-the-grid worthy. For this theme variety, that’s a win! Also, we get chatty IAMSODEAD and IOWEYOU.

I’m not sure why this puzzle felt so difficult. Maybe it’s my brain being stuck in first gear. I got into the shower with my glasses on the other day so…yeah. Anyway. The theme answers are phrases clued as if they were pronounced – differently. 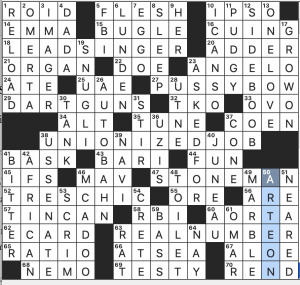 Both words are pronounced differently, so it’s solid, consistent, fresh and funny. Nice.

What I didn’t know before I did this puzzle: never heard of the ARTEON. Turns out it’s new. 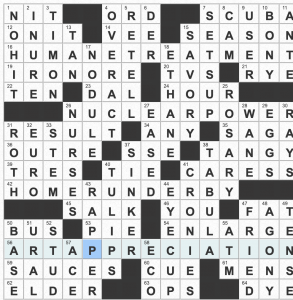 Seems to be a debut for Roger Miller! Congrats!

I’m going to jump right into my NIT (bigger than a NIT for me, actually) with Universal’s inability to offer circles in its widely distributed puzzle platform. I solved in the webapp (sans circles), and saw that I had to count letters. But I just hoped the hidden words would pop out at me since I didn’t want to count. In the first answer I saw MANE. In the second, CLEAR. In the third OMER (which is the mascot of Odyssey of the Mind, a creative problem-solving team that I coach in my high school).

So it wasn’t until post solve that I could really appreciate what was happening. Too late, imo. I would’ve liked the aha mid-solve on this one.

Nothing wrong with the construction, however! With much of the fill having to cross two theme answers, there aren’t too many long, splashy fill entries, but all of the themers landed and all of the hidden words bridged multiple words. Not much more to ask for in this type of theme.

EYE CUP is a new term for me. Didn’t know that’s what it was called.

Looking forward to the circle fix.