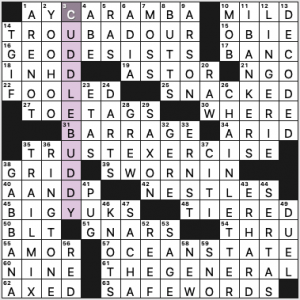 Ooh, a quick one from Kam this time. I really wasn’t expecting the solve to go so fast. I assume the whiz kids, like Stella and Erik and ’em, polished this off in under 3 minutes.

Did not know 33d. [German philosopher Bloch], ERNST, nor 6d. [___ Barnes, W.N.I.T.-winning basketball coach], ADIA. She’s the head coach at University of Arizona, and lets cross our fingers that the team gets to NCAA March Madness in the future, to cement her crossword-worthiness. Much better to have a notable person than a song title for ADIA.

Four stars from me. You folks hit any trouble spots here, or was it easier than most Friday NYTs for you, too? 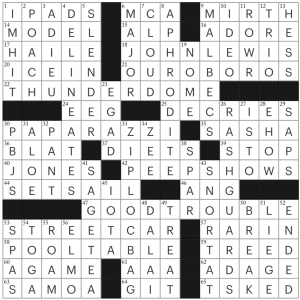 How is Wyna so good at this??? Seriously, what did I even just solve?! This is just some next-level puzzle crafting– it almost has the feel of an indie puzzle, with the longer clues and personal touches, but with the polish of a mainstream crossword. I’m not sure I can fully catalog the intangible feeling of all-around excellence I got from this puzzle, but let’s try:

First, the mini-theme of JOHN LEWIS and GOOD TROUBLE is lovely and timely, and this is definitely a case of necessary cross-referencing. Second, the other long entries: OUROBOROS, THUNDERDOME, PEEP SHOWS, PAPARAZZI, STREET CAR, POOL TABLE, DELINEATES, ZIPLOC BAG, APHRODITE, RASH GUARDS. All pretty fabulous on their own, but I think it’s the combination of the entries with the longer, editorial clues that really makes these entries shine. As in [Hemispherical arena where “two men enter, one man leaves,” in a “Mad Max” film]. Hemispherical! That’s how you know it’s a dome! [Voyeuristic fixtures of Times Square’s seedier past]. Such rich detail crammed into this clue! [Goddess born out of foam, after Uranus was castrated and his genitals were thrown into the sea]. Mythologically accurate and also so *vivid*! And it’s in clues like this that we can see another different between the New Yorker and the New York Times. The word count on clues for the NYT is definitely far lower, likely due in part to the constraints of the print edition. Since the New Yorker is only available online, the constructors can play around with these sorts of clues with no fear that they’ll be chopped down.

Ok I have to stop and go do my real job, but this puzzle gets all the stars from me. Wyna, please keep making puzzles just like this one. See you all next week! 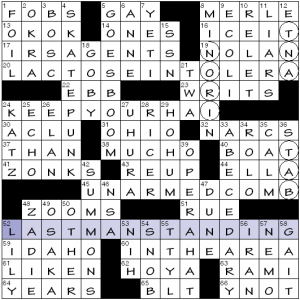 The three sets of circled squares are an immediately evident indication that something unusual is going on.

Can’t say it’s the most innovative theme or that it floats my BOAT (to use that word as a different metaphor than the one suggested by 40a [Situation, metaphorically]. I’m not one of the Fiendsters who typically tallies 0r highlights male/female and cis white/non-white ratios in the write-ups, but this one is particularly stark. Also, yesterday I read this interesting report, which is full of quantitative analysis of the subject; the subject is more in the forefront of my mind today.

Beyond that, I’m not keen on the use of a lesser-known Briticism as a key themer.

I like this theme a lot! Each theme answer is a common spoken phrase that ends in a word that is also the title of a recent movie. These titles also happen to be two-letter words hinted at by the revealer at 65a: SHORT FILMS [The movies at the starred answers’ ends, based on their titles’ lengths?]. 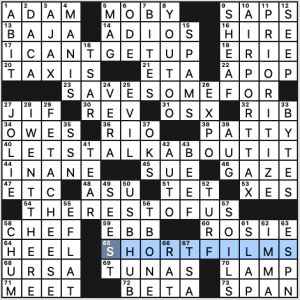 A fun theme. I especially like that all of these films are fairly modern, and they’re all two-letters long. What other short one-word films do you think might have been considered for this theme? Off-hand I can think of the old B-movie Them!, but I can’t come up with a phrase to make it work with the theme. And, at four letters, it’s twice as long as the others.

In the fill, I’m loving the brash “I WENT THERE” [“You heard me right!”]. FETA CHEESE and AIRPORT TAX make for good fill, too, but are decidedly less good in real life.

An enjoyable grid all around. Four stars.

Sisters Lita and Tass Williams have teamed up to give us a fresh offering indeed. There’s a string of circles in a diamond shape in the middle of the grid. 1d and 55d tell us what we’re looking for. 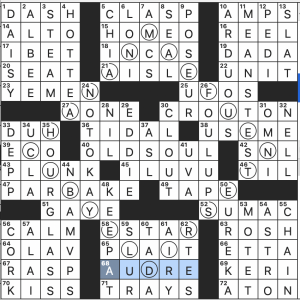 So I figured the circled letters had to be a CHAIN of DAISYs. It took me a minute to figure out where to start even though it’s the obvious place – at the top. Going clockwise, we have

What I didn’t know before I did this puzzle: see above re: PARBAKE. I also did not know that AUDRE Lorde said “Revolution is not a one-time event.”