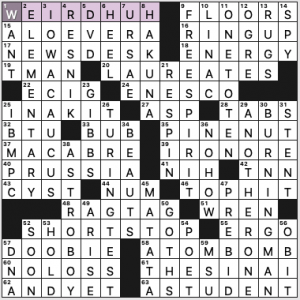 Am I having an off night or was this a good bit harder than the usual Saturday NYT? Took me a long time to find a useful foothold. Finally came together faster than a Newsday “Saturday Stumper,” but tougher than I expected.

Fave fill: “WEIRD, HUH?,” RING UP, NEWS DESK, PINE NUT (I have so many pine nuts in my kitchen! Bought an 8 oz bag of pine nuts recently, instead of the customary teeny glass jar I’ve seen before. Butternut squash ravioli with brown butter/sage/pine nuts as a sauce? I love it.), PRUSSIA (I might have both Polish and German ancestors who immigrated to the US when their home was labeled Prussia), RAGTAG, DOOBIE, IOWA CAUCUS, TURNING TEST, FREE SPIRIT, BURNING MAN, HAKUNA / MATATA.

Fill I wasn’t keen on: old T-MAN, IN A KIT, dated TNN, biblical abbrev NUM, awkward TOP HIT, NO LOSS (apparently it’s a term in insurance … but that’s not how it’s clued), ANOTHER ONE (how is this a stand-alone unit of meaning that merits inclusion in a crossword grid?). These entries kinda annoyed me.

No peace in this puzzle! Erm… that is, no Ps.

THEME: Shell game, where a shell hides the only P (pea) in the puzzle. 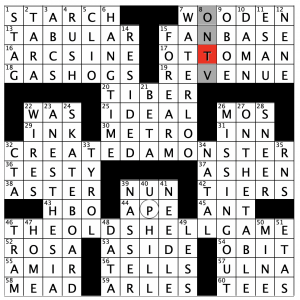 Well this was different! It was a fun puzzle to open, instantly noting the grid art with the three “shells,” the left/right symmetry, the low word count (68!), and the lone circled square. All of that immediately piqued my curiosity, and it was a joy to solve.

It wound up being as close to a themeless as Universal is probably going to get, but the AHA came with the SHELL GAME reveal (I’ve never heard it described as THE OLD…, but whatever!), and the realization that only one P was in the puzzle.

I usually tackle acrosses for a bit out of the gate when I solve the Universal, and the first entry I was confident in typing was WAS. So the difficulty level was far north of what it normally is, which was another welcome change of pace.

4 without the circle? I guess? I don’t know. It’s really a bummer that Universal can’t circle letters. 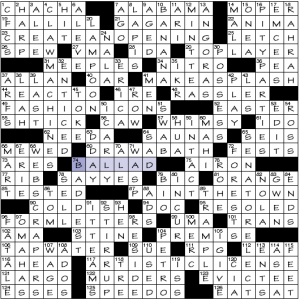 As a byproduct of the punny theme, we get a minor art history survey.

Pros: A variety of media: two paintings, two sculptures, two prints. A variety in parts of speech: in the context of the thematic puns, they’re all verb phrases, but the originals include two with adjectives (FASHION and FORM).

Cons: Male-centric (all the artists are men – 41d [Restroom sign] MEN). Western bias (all invoke full names except for the one Japanese artist). Not convinced the revealer does much to gather the other theme entries together, or otherwise provide a rationale. 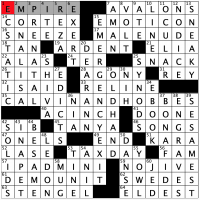 Slightly harder than normal, in my opinion. There are a couple of slightly difficult entries in here that wouldn’t be easy to clue even in an easier puzzle. I am still happy with a 7 minute solve time, and I wasn’t necessarily rushing through this one, but I found my self somewhat stuck in an area or two of this grid. But a fun puzzle, nonetheless! I always enjoy Ed Sessa’s creations. 4.4 stars from me. 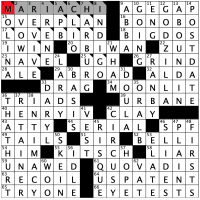 This was another teaser of a puzzle: I had the bottom half done in record time, then the top half was, well, different. Look at all of those error marks in the upper left corner! I misread a couple of clues; I just got new glasses! (That’s my story and I’m sticking to it!) Brad is a master at clues. This has been borne out in the Boswords Themeless league as well. If you haven’t checked out those puzzles, what are you waiting for! 4.6 stars today for another stellar Stumper.