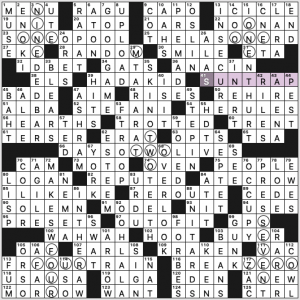 I like the theme. It’s sort of a riff on a rebus theme, where a spelled-out number appears within crossing answers (in circled/shaded squares), but instead of a single square containing, say, TEN, the crossing entries contain spelled-out numbers that, when added together, make the number needed for these themers to make sense. The added-together numbers are just letter strings within the themers.

Fave fill includes “GOOD GAME,” and that’s all I’ve got time for because my son just got back from picking up our Wrigley BBQ dinner.

Another — ANOTHER — absolute feat of construction today.

*If you missed yesterday’s comment from Evan on this site, he offered a warning that today’s puzzle would best be solved on paper*

THEME: Words that follow the word “black” are hidden in seven different sets of black squares throughout the puzzle. 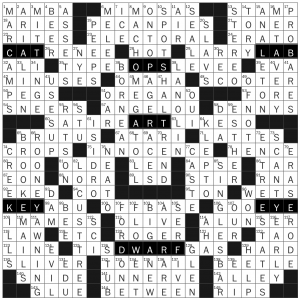 *The solution grid that appears here is the one offered through WaPo’s applet.

The added Birnholzian layers are all in place. They include:

I really don’t like solving on paper because it forces me to come to terms with the fact that I’m probably well overdue for purchasing me a good ol’ pair of reading glasses. So my time is well below what it would be, but whenever I get the heads-up that the WaPo needs to be solved on paper, I confess I get excited. I know I’m in for something clever.

Unfortunately, that heads up is also  kinda- sorta a spoiler, because I’m on the lookout for a trick, but I suppose it’s unavoidable in the digital age. That being said, I did uncover the gimmick quite early on with MACH[O], ON TO[P] and SPOT[S]. I saw Black OPS and knew where we were going.

What I wasn’t expecting was for OPS to be part of the entries below as well… and then for those entries to also include a hidden themer as part of their ends. Mind blown.

There were also several instances where I forgot to include the black squares, which explains why it took forever for me to get the SE corner.

Lots of fun clues in this one too:

Definitely a bit more bite, which is fine with this type of puzzle. Evan varies up the difficulty level and the theme concepts appropriately enough to reach all types of solvers.

ISIDRO, LANOLIN, BORNEAN,  and LOCUST TREE were all either new or difficult for me, but appropriately clued and fairly crossed.

Thanks as always, Evan!

I figured out what was going on with the first theme answer. It was a reasonably fun theme. We didn’t have Joe in our database. Is this a debut? If so, nice job!

Each theme answer is a base phrase with a CH added. Wackiness results. 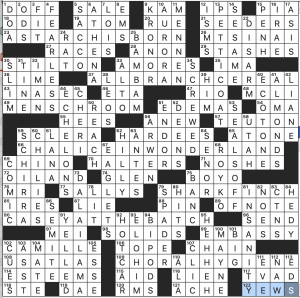 Overall, it’s a good Sunday theme. All the base phrases are solid and the theme answers work almost perfectly.

What I didn’t know before I did this puzzle: that Soong MEI-ling was Madame Chiang. I also did not know (or at least did not remember) that Kim DAE-jung won the 2000 Nobel Peace Prize. My US-centricism is showing. And my NE US bias: I did not know that HARDEES started in Rocky Mount, NC. 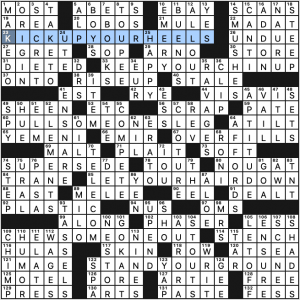 A very playful theme, and that counts for a lot in my book. 21x puzzles can be slogs, but when your theme is fun and lively, that helps a lot. That said, I was a little thrown by all the duplication of “you”s and “your”s in the clues and entries. I don’t know that that would be allowed in most publications, but this theme would be impossible to do without resorting to repeating those words, so it’s just one of those things, I guess.

The fill is solid but I’m surprised there isn’t anything especially sparkly. VIS-À-VIS, SMUSHES and GO KART are the most colorful; the rest of the long entries are single words like APTITUDE, ELEMENTS, TASSLES, TELECOM, SUPERSEDE. I do like the word CLOTURE; that’s just fun to say.

I liked this offbeat but lively theme. 3.8 stars.