This is a straightforward Monday theme that didn’t add anything to the solving experience. 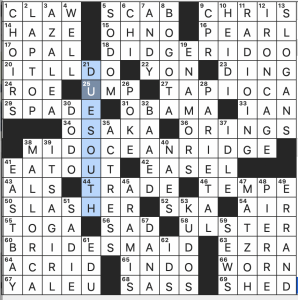 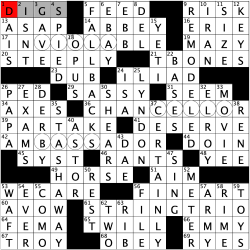 Let’s go to the revealer first: 61A [Ensemble playing in this puzzle’s circles] is a STRING TRIO. And if you go to the circled letters of each theme answer, you find that in each case they spell out a stringed instrument:

Tell me how to feel about this theme, y’all. I’m impressed that all the thematic material fits into single words that can be clued with brevity — often, the LAT theme clues get quite wordy on Monday to keep things easy for solvers, but here the clues are both short and clear.

…but, how many STRING TRIOs do you know that are written for that combination of instruments? VIOLIN doesn’t fit nicely into any 10-letter phrases…but it is pretty damn ubiquitous in string chamber music. A violin, a viola, and a cello? I buy that. Two violins and a cello? Check. But a viola, cello, and bass without a violin? I’m not going to say it’s never happened, but it seems like an unlikely TRIO to me. 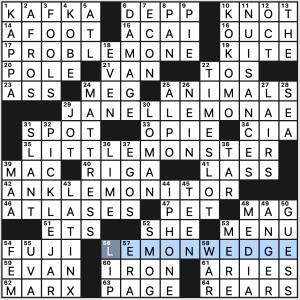 That works well for a Monday. I especially like the modern touches including Lady Gaga and JANELLE MONÁE (whose last name is usually all that makes it into a grid).

Fill highlights include PICKLE JAR, NUISANCES (which echoes the LITTLE MONSTER entry), TIME SLOT, and LATINX.  Not a fan of weird TOS [Talking-___ (reprimands)], but I do like all three of its crossings, so I guess I can live with it.

I leave you with Janelle Monáe’s powerful political anthem which was born out of a call from Stacey Abrams to help get out the Black vote in Georgia. Read more about it here. (Plus, I love those cool glasses she’s sporting.) 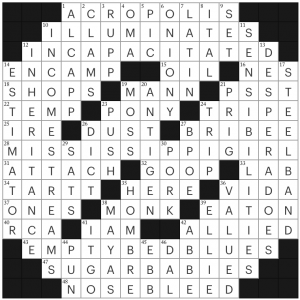 Another cool grid shape today — more evidence that the New Yorker offers constructors the flexibility to play with “cheater” squares to make unique creations in their grids. This one is particularly interesting, blocking of the corners to make an almost round grid? I’m into it.

One effect of this design is that instead of your normal NE/NW/SE/SW grid corners to fill and explore, we have long entries in the N/S/E/W, plus a grid-spanning (15) through the middle. The central entry, MISSISSIPPI GIRL, is not a song I’m familiar with, but I listened to it just now for science. I can’t say I particularly *enjoyed* the song, but it’s a good entry! Lots of S’s. Other long stuff that I liked includes ILLUMINATES in reference to decorating medieval manuscripts; SENSIBILITIES [They may be offended], and EMPTY BED BLUES, which I enjoyed more than MISSISSIPPI GIRL.

Overall, lots of stars from me for the funky grid design and mostly clean fill. See you on Weds! 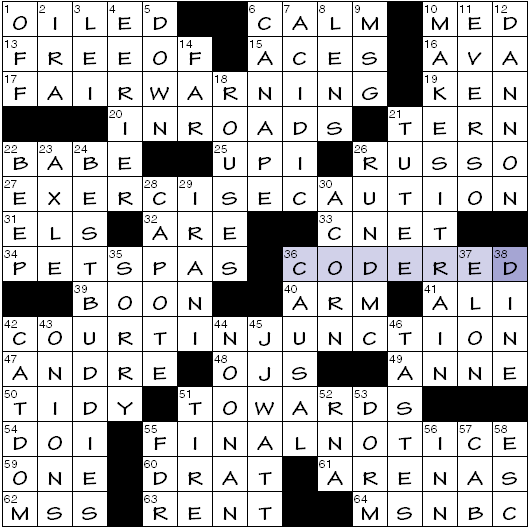 Solid, but a little dry.