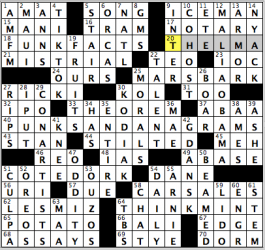 Welcome to the start of the final month of 2020! We’re almost rid of this memorable-for-so-many-wrong-reasons year on the calendar. Though I’m probably being a touch dramatic, I do hope that some elements of 2020 have been memorable, and Liz and many other constructors have tried their best this year and every year to provide some joy for you with every crossword they release into the world for all to consume. For that, we thank you all!

Today’s puzzle is not an ode to the swinging strikeout in baseball, but it does place the letter K at the end of a word in well-known phrases/nouns to create lots of punks…err, I mean, puns!

What? There is a famous Fabi who is not the Jeopardy! champion and bioethics whiz who resides in the Salt City and blogs for Fiend? ‘Tis true, and this Fabi, TEO, staked his claim to fame by earning the pole position at the 1983 Indianapolis 500 as a rookie in the famous auto racing event (22A: [Auto racer __ Fabi]). The amount of Ks in the grid allowed for some pretty nice entries, from TIKTOK (4D: [Short-form video-sharing app]) to KODIAK (30D: [Alaskan bear]). Those paralleling entries of MALIA OBAMA (12D: [Daughter of the 44th president]) and CON ARTISTS were fun as well (29D: [Hustlers]). I got a little annoyed at myself for not immediately getting GDANSK right off the bat, with me taking pride in knowing lots of non-capital-city locales in Europe and all (42D: [Polish seaport, home of the Solidarity movement]). Seeing RICKI definitely made me remember her eponymous talk show, which I watched a lot more than I would like to admit (27A: [Actress Lake of “Hairspray”]). Could have talked about NBA Hall-of-Fame legend George Gervin, nicknamed the ICEMAN and known for his finger roll shot, but decided to go in another direction that I think many would like (9A: [“The ___ Cometh”]).

“Sports will make you smarter” moment of the day: GMS (8D: [Baseball execs]) – Since the day the game of baseball came into existence almost 150 years ago, all of the GMs making the personnel decisions in every single clue have been men. That was the case until three weeks ago, when the Miami Marlins hired Kim Ng as their general manager, marking the first woman and first Asian American to be named to that position in the Major Leagues. I remember Ng making waves back in the 1990s during the Yankees’ last dynastic run, as she was hired as the team’s assistant GM in 1998. She also was named to that same position with the Los Angeles Dodgers in 2001. Ng was hired by current Marlins president — and Yankees legend — Derek Jeter.

(Note: The Marlins previous general manager for the past seven seasons, Michael Hill, is an Afro-Cuban [African American father, Cuban mother] who did a masterful job in navigating Miami to the playoffs — and winning a playoff series — in 2020 despite the team having its season severely impacted by a coronavirus outbreak. He’s in the running to become the new Mets’ GM, and I’m hoping he and other minorities, such as Ng, get the chances they have more than earned, especially in the light of minorities usually not getting rehired to executive positions [e.g. general manager, head coach] after their first opportunity at those positions.) 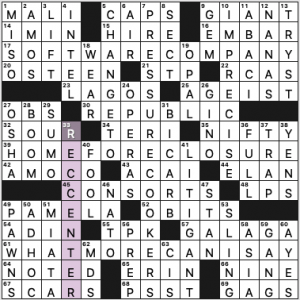 The theme revealer’s 33d. [Community sports facility … or a hint to the answers to the five starred clues], REC CENTER, and the 9- and 15-letter themers contain the letter string REC smack dab in their centers:

That’s a lot of theme material for a Tuesday puzzle, four 15s and a pair of 8s, all latticed together in the grid. You might expect to see terrible fill throughout the puzzle with the theme’s constraints on everything else, but it’s actually quite deftly assembled. I’d argue that EMBAR has no business in a Tuesday puzzle, but aside from that, everything felt fair to me. 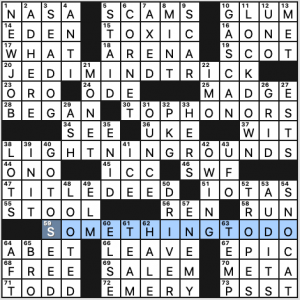 I’m a little confused as to whether each “do” phrase needs an article, and if so, which one. You could do a trick, but something might just do the trick. “Honors” needs the definite article for sure (do the honors), but “deed” could go either way again (do a deed, do the deed). To my ear, “rounds” doesn’t need either article. “Do rounds” is something my wife did a lot of when she was a medical intern and resident. Googling “do the rounds” reveals it’s a chiefly British phrase akin to our “make the rounds.” In short, I found this aspect of the theme a little distracting.

I’m okay with the fill though, especially timely LOCKDOWN, but also GO TO SEED, CORNET, and the almost symmetrical SEA DOG and SNO-CAT. I’m not so keen on ICC [Former agcy. that regulated railroads], but at least the crossings were clear enough.

I’m cool with the theme, but to me, the ambiguities distracted. 3.3 stars. 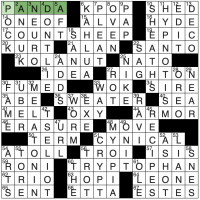 This puzzle didn’t make me sleepy, but I still need a nap. I think I have given up on taking them!

Gee, I wonder where the idea for this puzzle came from … ? Hope it didn’t put YOU to sleep. A tad easier, at least to me, than a typical Jonesin, but still accessible and a joy to solve. I am going to try and take a nap this week! 4.3 stars. 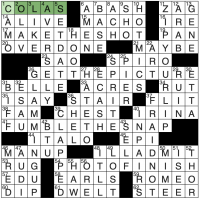 Another fun puzzle from Bruce this week. The revealer is the theme entry at the end:

Easy enough! Shot, picture and snap are all synonyms for photo. Just got done watching a Foggy Brume cryptic stream where the theme was also pictures, in a way. Watch the entire 2 hour stream if you want to find out what I am talking about! That puzzle from the Magpie was a beast. These Tuesday regular crosswords take a lot less time! 4.3 stars today.