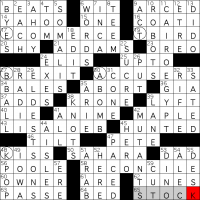 hello and welcome to episode #652 of matt gaffney’s weekly crossword contest, “Solved in Full”. for this week 4 puzzle, the instructions tell us that the answer is a familiar 5-letter proper noun. what are the theme answers? they’re not the longest answers in the grid, but there are five different answers of the form [letter]-[word]:

the title suggests the next step: we’re interested in the full word shortened to a single letter at the start of each of these theme answers. so ELECTRONIC commerce, THUNDERbird, BASKETball, ATOMIC bomb, and KOREAN pop. those five are hiding in disguised form in five across answers. disguised how? well, they’re anagrammed with one letter missing (what some people call a transdeletion). from top to bottom in the grid, we have:

taken in this order, the missing letters spell out K-MART, which is a familiar 5-letter proper noun, and also itself fits the form of the original five theme answers. so that is the meta answer.

this is an excellent meta, cleanly executed and with several satisfying aha moments. although there were no huge intuitive leaps necessary, finding each of the transdeletions was a mini-thrill, and the final answer was a nice extra click.

it was also, i think, much easier than last week’s meta. once you locate those five theme answers, you almost can’t help but solve it, because the next step is always strongly suggested. and while it’s true that it’s not obvious at first glance that those five theme answers are the theme answers, the first two of them are easy to identify as such based on their location (17- and 19-across) and parallel formation, and from there it’s a simple matter of noticing the other three. the instructions suggest looking for five things, so you basically know when you’ve found them, and then the title tells you what to do next. so i think this is basically the week 3 meta that we didn’t get last week, and that was the week 4/5 meta we should have had this week. works for me! although i didn’t get last week’s, i was grateful for a relatively easy one over the holiday weekend, since i was away from my puzzles until sunday. overall, it was a satisfying slate of november puzzles even though the difficulty ordering was maybe a bit wonky.