As you can see from my time, this was not blazingly hard. As you can see from the byline, it was made by a man. On the first point – this felt easier to me than the Wednesday NYT. Since the difficulty level in puzzles is largely set by the cluing, it could have been much harder. It’s subscription season at the Fireball and maybe Peter is trying to broaden his market share.

Speaking of subscriptions, you can sign up here. I’ve made an issue of the lack of non-male representation in these puzzles, and I still think they are totally worth the money. They are consistently well-made and entertaining to solve even when they’re surprisingly easy (at least to me). And it’s a good thing in general to support indie puzzlemakers and publishers. We’re living and solving in the golden age of crosswords, thanks to the interwebs, and the folks who do the work so we can have the fun deserve to get paid. So subscribe, and put some extra money in Peter’s tip jar if you can.

On to the puzzle:

As usual, Peter gives us a mini-theme, or at least a pair of connecting answers. They’re not first and last this time. 23a [Person who comes to bat to start the second inning if no one gets on in the first] is the CLEAN–UP HITTER. 45a [Pitcher brought in when a team is losing in a blowout] is the MOP–UP RELIEVER. Nice pairing! I’ve listened to a lot of baseball in my life – it’s the one sport I pay attention to – and both of those are definitely in the language of the game. This is where I would usually insert the countdown to pitchers and catchers reporting but….pandemic. Sigh.

Other things of note (at least that I noticed) 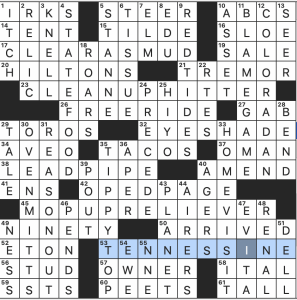 What I didn’t know before I did this puzzle: see above re: ST ANNE. I also did not know that EVITA won the Golden Globe for Best Motion Picture – Musical or Comedy. I honestly didn’t know they had two Best Motion Picture awards (the other is for Drama). I’d never heard of TENNESSINE, element #117, and neither had my husband. He memorized the periodic table in high school, which was a long time ago, and TENNESSINE wasn’t discovered until 2010. Yes, dear reader, I married him. 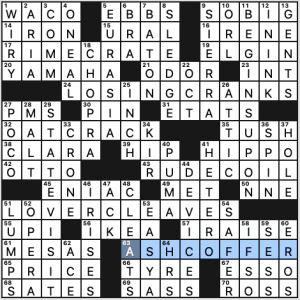 I like the wordplay and the consistency of limiting the theme to C-starting phrases, however none of these tickled me in particular.

STATE VISIT, Deepak CHOPRA, YAMAHA, and EURASIA highlight the fill for me. The rest of the fill was fairly standard fare.

One clue of note: 70a. [Supreme leader]. ROSS. Diana, that is. How many of you were stuck on BOSS for this one? This isn’t a new clue, but it’s definitely a good one. And it’s late in the week, so I guess that means a question mark is optional.

Nice wordplay in this theme, but not all that sparkly. 3.3 stars. 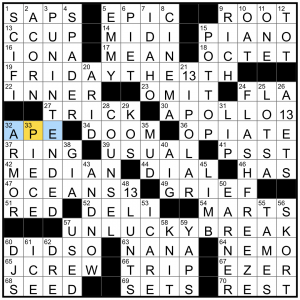 As evidenced by the screenshot at right, you can also enter a 13 with a rebus square to get FRIDAY THE 13TH, APOLLO 13, and OCEAN’S 13, but putting the B there (if you’re like me and got all of BIPOLAR, ABETS, and BLUNTS from the down clues) helps see the UNLUCKY BREAK going on.  Breaking a B into two parts (the stem and the curvy bit) gives you 1 3.  13 is an unlucky number.  Et voila.

Elsewhere in the grid: I would have loved a slightly more recent reference for GIA than actress GIA Scala (who, looking over her body of work, doesn’t have anything that made me go “oh, HER!”).  How about drag queen GIA Gunn, or director GIA Coppola?

THEME: Two word phrases where each of the words starts with WH- 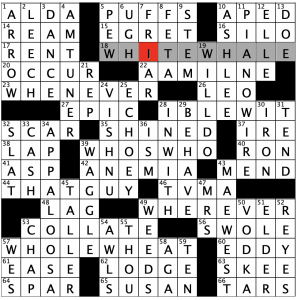 Nice finds in this one to create a consistent, well executed theme. Normally, I’m not a big fan of theme answers being split in a grid, but there is something I really like about WHENEVER / WHEREVER flanking the center themer. It feels very… symmetrically satisfying.

Liked THAT GUY in the fill very much, even though it played a part in creating the very strange looking/sounding ECHOEY. I BLEW IT and the clue for AA MILNE were other fill standouts.

Doubted myself on how to spell ANEMIA only because WIGGLE is more familiar to me than WAGGLE. Can one WAGGLE without a WIGGLE first? I’ve never WAGGLED. WIGGLING on the other hand… I’m a pro. 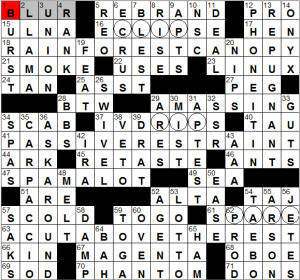 Thursday’s puzzle is extra-wide. It features 3×16 answers with REST. The third, ACUTABOVETHEREST alludes to a second factor in the theme. Three broad synonyms for CUT are found above the tetragram REST: CLIP, RIP, PARE.

Among the better long answers we get are SPAMALOT, CARPACCIO (springbok is a popular choice here), and PHONEITIN.

Trickiest double-cross: [Vile] was not REPULSIVE but REPUGNANT.