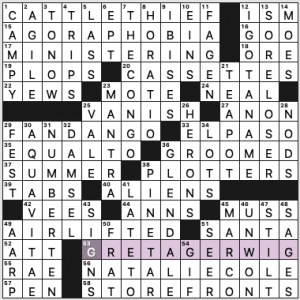 It’s been a long week, hasn’t it? And it’s only Thursday night. Let’s get to it.

Fave fill: MINISTERING, FANDANGO, GRETA GERWIG, NATALIE COLE, STOREFRONTS, THE CONGO, “I GOT A NAME,” and the topical SORE LOSER. Also nice to see IBISES and HERONS, since Team Fiend’s Gareth has been out birding all week in South Africa and has cool pictures of various tall birds (including egrets, flamingos, and storks).

Unloved: ISM, VEES, ANNS, the vaguely awkward TO NOW and LATE TO, and UNWON.

Did you notice all the two-fer clues? [Long-legged waders] for IBISES and HERONS. [Communicates nonverbally, in a way] for NODS and SIGNS. [Sticky stuff] for GOO and PINE TAR. I liked those and the generous smattering of question-marked clues.

Here’s 55a [Issa of comedy], RAE, four years ago on Conan. The racy words are bleeped. have no fear. 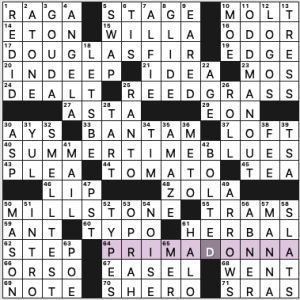 I love seeing Andrea’s name in a byline. Her puzzles are smooth and well-crafted and a joy to solve. This one was no exception. I didn’t figure out what was going on with the theme until after I’d solved the whole thing. 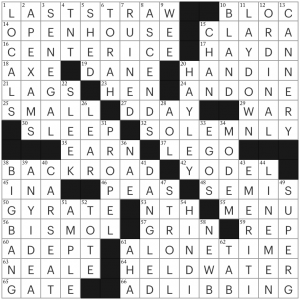 When they say these Friday puzzles are lightly challenging at the New Yorker, man, they are not kidding! It’s obviously always a total thrill to tear through a puzzle, so of course I enjoyed this one, but I think something that often gets overlooked is how incredibly hard it is to make high-quality puzzles this easy (see also: the USA Today crossword, which does this every day). Every entry has to be gettable with minimal resistance, you cannot have obscure crosswordese fill, and the clues all have to be written at the perfect interesting/easy inflection point. Caitlin Reid has nailed all of these things, creating a masterpiece of an easy puzzle. And that she didn’t sacrifice the shininess of her long entries or the arts-and-culture inclination of the New Yorker just speaks to what a talented constructor she is.

The longer entries in the NW/SE today were: LAST STRAW / OPEN HOUSE / CENTER ICE / ALONE TIME / HELD WATER / AD-LIBBING. All excellent! And to dive a little deeper into this interesting/easy cluing blend, let’s examine the best clues of this bunch, starting with [Proverbial back-breaker] for LAST STRAW in the first across. This is so perfect! You should know exactly what the answer is without much effort at all, but the clue is elegant and satisfying anyways. Similarly, the clue on ALONE TIME, [It’s treasured by introverts], is easily gettable and perfectly defines the entry, but it’s not a boring straight definition. Just lovely, thoughtful cluing throughout.

Overall, all the stars for this lightning-fast-but-still-satisfying Friday puzzle. See you next week!

The theme answers today are based on well-known two-word phrases but with a famous person’s last name (that ends in an “un” or “en” sound) replacing the original gerund. 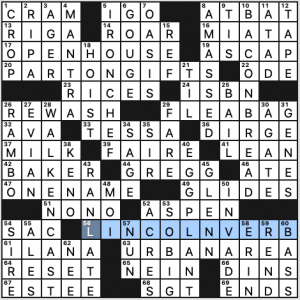 Overall, pretty fun, yeah? I enjoy a good pun, and these weren’t terrible, so that’s a win in my book.

I am curious as to the layout of the grid though. With only four themers and none of them longer than 11 letters, it seems like they could have easily been placed in the more standard all-Across arrangement (rather than the pinwheel we have here). That typically allows the solver to identify the themers more easily and leaves the Down direction open for some juicier fill entries.

But be that as it may, we don’t seem to have been deprived of some fun fill. OPEN HOUSE, IRON CHEF, FLEABAG, and EGGPLANT are all nice. Also good: URBAN AREA, MANTRA, and the crossing of double-lettered names GREGG and GLENN. 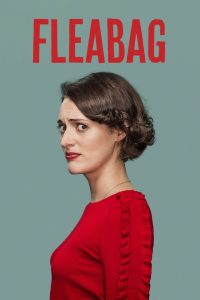 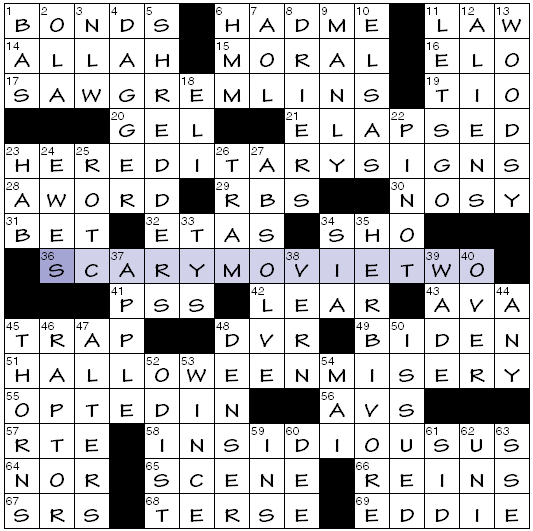 Horror is not a genre I’m particularly into, but I can at least appreciate these theme answers. However, there’s some other stuff going on in the grid that gives me pause:

12d [Sci-fi film staples] for ALIENS is all well and good, but that’s also the name of an action-horror movie sequel (1986). And then, symmetrically opposite is 46d [“Jurassic Park” enemy] RAPTOR; Jurassic Park (1993) might be considered to an adventure-horror film as well, but more critically RAPTOR is the name of a 2001 (direct-to-video) horror film. These might be considered bonuses or Easter eggs, but to me they seem like half-theme answers and as such are a major distraction. And speaking of Jurassic Park, there’s another gratuitous half-invocation via the clue for 35d HERBIVORE, [Stegosaurus, for one].