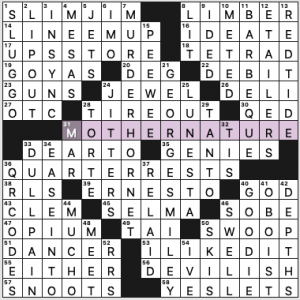 This swirly 68-worder brings us the [Informal name for Vespa mandarinia], MURDER HORNET. A prototypical piece of 2020 news, that murder hornets story. Please let 2021 break free from the 2020 vibe!

The other pinwheeled 12s here are MOTHER NATURE, lovely, along with GEORGE SMILEY and QUARTER RESTS. The four outer quadrants feature stacks of 7s and 9s crossing 6s. Each corner has two answers feeding into it, providing decent flow. Did you find the puzzle easier than expected? I did, and the flow probably helped with that (as is knowing Brendan’s puzzle style for 15 years).

Other good fill: SLIM JIM, “LINE ’EM UP,” UPS STORE (dropped an Amazon return there today, unboxed, super easy), SWOOP, “I LIKED IT” (“… but didn’t love it”), BARBEQUE, LUNESTA, JITTERS, a DULL PAIN (mostly better than a sharp pain, no?), and who doesn’t appreciate a GOODIE?

Did notice the duplication of OUT in LIP OUT and TIRE OUT. 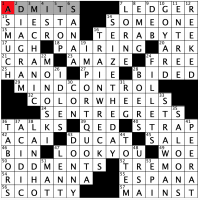 I am getting used to Roland Huget’s puzzles at this point. I have done quite a few of them over the years. This was a smooth solve, and there are a TON of fun entries in the grid, highlighted by TRAIN WRECKS and COLOR WHEELS crossing right in the middle. There is a lot of good ones to talk about, so I will keep the blurb short! 4.6 stars from me. 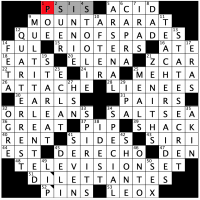 Finally, a fairly easy Stumper! Stan (“Anna Stiga” = Stan again!) has a nicely wide open grid, and it did stump me for a little bit. But I had a nice quiet and calm 6-7 minutes, and the puzzle was just about filled in. Full disclosure: the timer on Across Lite stops when the grid is filled, not when it is correct. So tack on another 10-15 seconds to fix those two errors in 49D! Still a great time, and far from a mood altering normal Stumper. Or maybe I just got enough sleep for once! 4.3 stars this week. 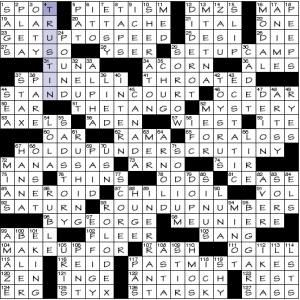 We’re treated to a collection of phrases where the first word is a verb and the second is the preposition up. Together they’re deliberately misconstrued by the clues to be a single noun.

This is a good, strong theme. Much more cohesive than I first realized. Have to thank the obligation of writing about it for helping me to see.