I smiled multiple times while working the theme entries here, and there were some fun things in the fill and clues, not much in the way of clunkers. 4.25 stars, enjoyed it! It’s so nice to have fun with a Sunday puzzle rather than finding it tiresome. 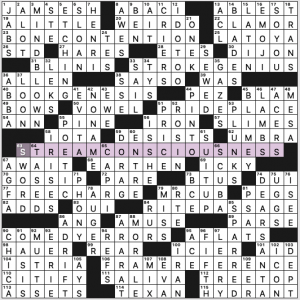 Tony’s theme removes the “of” from familiar phrases and clues the resulting things accordingly:

The theme worked really well, I thought. No wrong notes.

THEME: Famous quote attributed to Julius Caesar is hidden amongst the theme answers. 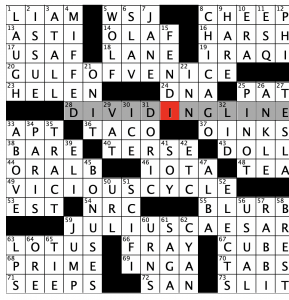 Fun to see the quote included in its entirety since constant solvers are accustomed to seeing only a part of it with the clue [Part of a Caesarian boast]. I also appreciate the lack of circles in this one. On one hand, I wasn’t able to determine the theme of the puzzle until after the solve, but on the other it allowed me to find the quote myself. Initially, I did immediately notice that each of the themers contained a V, but that was about it.

As far as the theme answers themselves, GULF OF VENICE is new to me… I think, and DIVIDING LINE doesn’t strike me as all that common a phrase, though I’ve heard it. Typically, the hidden word “bridges” other parts of the theme too. In this case it consistently does not (I mean “consistently” in positive sense).

Great clue for 70A [Safari group] TABS. I don’t much use the Safari web browser that much anymore, but in Google Chrome I rarely have less than a dozen tabs open.

I’m not quite sure I understand the WSJ clue: [B-school paper?]. Does the B stand for Business?

Before I get to my (anti-climactic) write-up, a big congratulations for Evan as today marks five years since he published his first WaPo puzzle. And hasn’t it been a fun five years?

Meta time! Only I haven’t figured out the meta yet. So I’m going to re-solve the puzzle in a little bit and hope something jumps out at me before I suck it up and open the clue that Evan sent me should I get stuck. 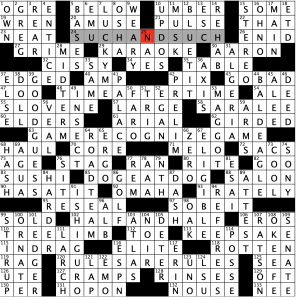 THEME: Well… something to do with phrases where two of the same words “sandwich” another word.

Things I’ve tried so far include the old-reliables: Looking at initial letters of each of the themers, and of just the middle words. I’ve also looked for other words in the grid that can substitute for the words SUCH, TIME, GAME, etc. Nothing so far, though I haven’t put a helluva lot of time into it. I noticed the word “Winter” repeating as the first word of two different clues, one oddly referring to a WREN, so I thought I had something there. But it led to nada.

Often, simply re-solving with heightened attention to the clues is a way to help deduce a meta answer… so here we go.

Welp, besides noting that ALE is above SARA LEE and IN DRAG is above RAG, which I’m relatively sure means nothing, I’m at sea with this one. Let me decode the ROT13 clue Evan sent, and I’ll paste it below:

Think in really simple terms about what each “sandwich” has. What would you get if you put something inside them?

Let’s jump to other aspects of the puzzle.

Today’s theme employs well-known two-word phrases where each word is a synonym of the words in a phrase of the form “___ AND ___”. SYNONYMS is at 113a to provide that additional nudge.

I’ll list these in order of the helper two-word phrases. 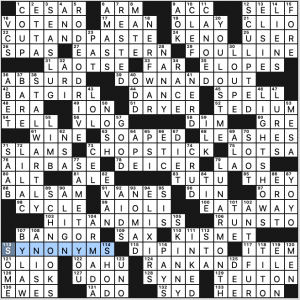 Very clever finds. I don’t know how one goes about finding these pairings. It seems like you would start with the AND phrase, but then where do you go from there? I guess you would find a synonym for one of the words and then search for phrases that fulfill the requirements. Seems like a long trial-and-error process.

Fortunately as solvers, we don’t have to worry about that. But we do have to contend with all the cross-referencing, which isn’t exactly solvers’ favorite thing. I’m glad I hadn’t bothered to time myself on this one.

Plenty to highlight in the fill today. We have RODEO DRIVE, “YOU LOST ME,” (partially duped by) “SAME TO YOU,” LIGHT SHOWS, SCHNOOKS, LUNAR MONTH, NERF WAR, ELIXIRS, and SEA SLUG. On the shorter side, I liked “VOTE NO,” TEDIUM, and KISMET.

I could do without the long adverb STALWARTLY which I can’t imagine ever getting much use. “Stalwart” is a great word, but as an adverb, it’s just awkward. One other nose-crinkling bit of fill for me was VCS [Silicon Valley investors, briefly] which is plural venture capitalists. Bleh.

This was a complicated theme and a tricky construction. I’m impressed, but does that transfer over into solver enjoyment? You decide. On the whole I liked it, and the super sparkly fill made it even better. 3.8 stars.

Cute theme! Each theme answer is a familiar phrase clued as if it referred to a Disney character. The checked block is the typo I didn’t have the patience to search for. And Paul has a double today – check out the Universal Sunday. 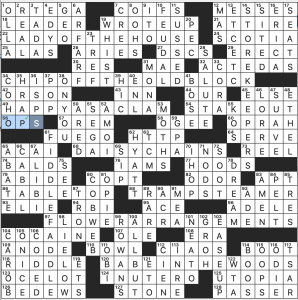 I enjoyed this! They’re all solid and the clues work (although “kitchen cooker” sounds a bit clunky). It was fun to figure them out and now I can drop into the YouTube rabbit hole and relive my youth.

What I didn’t know before I did this puzzle: that IHOP was reduced to its initialism in 1973. I would’ve said it was much later than that.