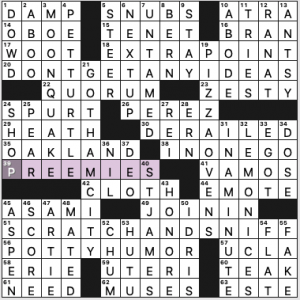 Other entries I liked: EXTRA POINT (if the clue, 18a. [Something about which you might say “It’s good!”], sounds weird to you, imagine “It’s good!” shouted by an overexcited NFL announcer), “DON’T GET ANY IDEAS,” IN ONE GO, PREEMIES (like my kid, back in the day), SCRATCH-AND-SNIFF (though I feel the clue, [Like some perfume ads], might be a bit off? the last time I was encountering many magazine fragrance ads, you’d tear open a strip to unleash the scent rather than doing scratch-and-sniff, but I’ve only gotten one smelly ad in the last few years so I could be wrong), new-to-me MOONQUAKE, and GOTHAM CITY. 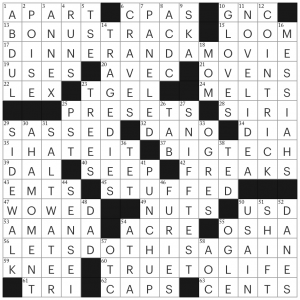 You guys, I think Robyn just asked us all out on a date?? I have to say, an old-fashioned DINNER AND A MOVIE in a restaurant and then a theater that both contain lots of people will probably not feel safe for a long time, but it’s nice to be reminded of The Way Things Were. As for the puzzle, I agree with Robyn when she says LET’S DO THIS AGAIN — I would do a Robyn puzzle every day of the week, honestly, and I don’t think I’d ever get bored of them!

The non-marquee long entries today were pretty excellent, although one felt oddly familiar. We have: BONUS TRACK / TRUE TO LIFE / NOVEL IDEA / COIN TRICK / AHA MOMENT / SALTWATER / TRAGEDIES / SNIFF TEST. We just had SMELL TEST in yesterday’s NYT, so I wrote that in here, too, which thoroughly screwed up that region of the grid (for about 20 seconds– this is, after all, a New Yorker lightly challenging Friday). I think of the two, I am more familiar with SMELL TEST than SNIFF TEST, but I think they’re equally valid. My first write-in for TRUE TO LIFE was TRUTHINESS (thanks, Colbert). Sidenote, I used the word verisimilitude *conversationally* yesterday when discussing these extremely uncanny valley masks that you can put over medical manakins to make them look more TRUE TO LIFE and mirror the actual diversity of hospital patients. Creepy AF but also better than having all white male manikins. 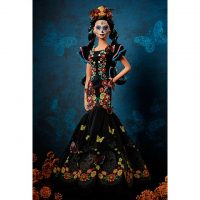 Overall, really fun solve, despite a few hiccups on my end! Tons of stars for a smooth, clean grid and crunchy solve.

We have a debut puzzle, and the poor constructor is strapped for cash. He’s filled all his theme answers with IOUS. Well, maybe now that he has a publication, he can pay his friends back. 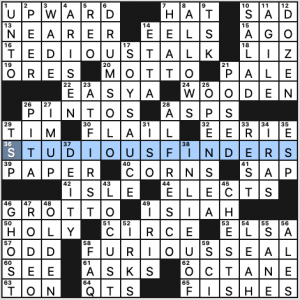 Only three themers, but they were all enjoyable. Out of curiosity, I looked up some other words that might lend themselves to this theme. Potential alternatives might include cop and copious, vic and vicious, facet and facetious, and vicar and vicarious. But changes in parts of speech probably preclude most of them from working.

There are a few nice things in the long fill and, curiously, they’re all clustered in the center. DRUM SOLO, SOY SAUCE, OPEN SEA, and AL FRESCO top the list with IN LIEU OF and AT FIRST rounding things out. It’s surprising to have all that nice fill close together with very little to show in the way of a price to pay. I guess since there are only three themers, there’s more allowance for fun fill. 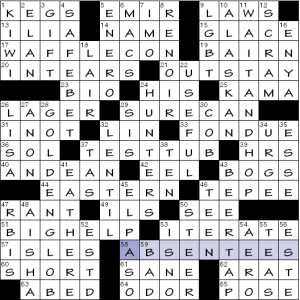 This one took me longer than usual to solve, even though I don’t report my times.

Sorry this is so late! I’ll sneak in just before Saturday’s post goes up. This puzzle deserves better than I can give it right now. It’s a really good puzzle that was pretty difficult for me; despite the “Themeless” tag, there’s a strong musical vibe that was not at all on my wavelength. I’d blame it on my age, but that’s not the whole story. 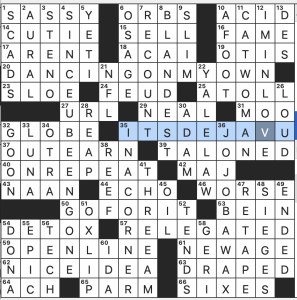