Hey! It’s Sid and Brooke! I was just scraping the rust off this site’s “Crossword Links” page the other day and added links to their respective puzzle sites. The page is still a work in progress, wildly incomplete. There are so many people with crossword sites now. 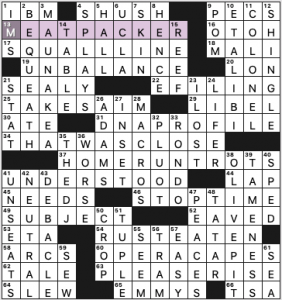 Interesting grid here—it’s got an extra row that accommodates a four-pack of long entries in the middle. The whole dang thing is jam-packed with long fill, isn’t it? Of the 16 rows, a whopping 14 have entries of 7 to 12 letters. There are another 10 Downs in the 7- to 8-letter range. Basically a five-section grid with lots of flow. 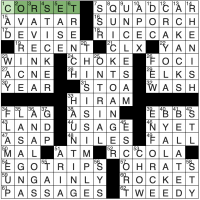 I always enjoy Jeffrey Wechsler’s creations. This one had a little bite to it, but in the end, it wasn’t too thorny. I loved this wide-open grid, which has large chunks of 6-, 7- and 8-letter words all interwoven together. I think there are only the two 12-letter entries longer than 8 letters, but nearly half the grid has words of at least 6. Phenomenal, especially since there is virtually nothing uncommon in here. Exceptional, but I am not surprised by this level of skill coming from Jeffrey! We have vaccines on the way (possibly??), so perhaps life will be back to a semblance of normal in time for the ACPT next spring? I hope so! 4.7 stars for this puzzle in the meantime. 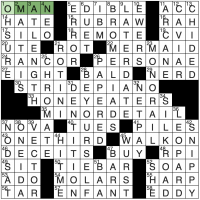 This was a toughie, but I didn’t give up! I so wanted to check how I was doing (because I get tired!), but as you can see, there are no error marks in this grid! The NW corner absolutely beat me up. The SW was the easiest, but suffice it to say that there were wide swaths of white squares in this grid for quite a while. As I mentioned on the Boswords stream a few weeks ago when Stella was getting interviewed, this was definitely a session of “joyful agony.” By that I mean that, after solving puzzles for decades, I KNOW I can solve the puzzle, but the answers seem so elusive at times. Paolo Pasco, in the same Boswords series, used the phrase “vibing” to describe the solving process. His vibes are quicker than mine, and that was evident in this puzzle! I get the same “joyful agony” from harder logic puzzles, like sudoku or other types like loop or shape puzzles. More on that another day! But this was a truly “joyful” Stumper to solve, although I do feel slightly weary! 4.7 stars from me.

THEME: Phrases where the first word is a synonym for “Top.” 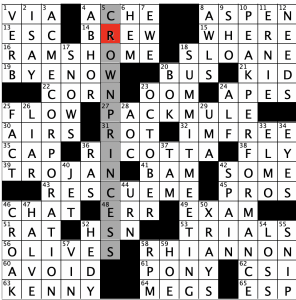 And of course the themers are aptly placed vertically in the grid, though with rotational symmetry in place, SUMMIT MEETING has the unfortunate appearance of being the low man on the totem pole. Would it be possible to create this grid using left/right symmetry to position all theme answers at the top? Not sure. I’ve only toyed around with left/right symmetry for a brief moment.

Liked the juxtaposition of 25D/26D [You should believe one] / [You shouldn’t believe one] FACT/LIAR. Though it’s oddly difficult, if social media is any indication, to get people to believe FACTs and disbelieve LIARs. 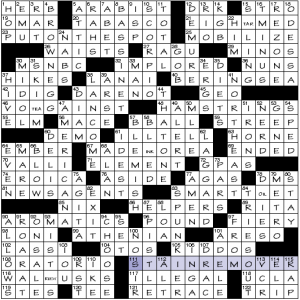 Two revealers in this one. The first one comes early, at 23-across, and pushes the solver to get an idea of what’s going on: [Pressured, or what five squares in this puzzle do] is a strong indication that those symmetrical locations will be rebus squares. The answer is PUT ON THE SPOT, and spot would seem to be the operative ELEMENT (71a).

These rebussed words can all be seen as types of spots. Finally, or at least toward the end, we see the second revealer: 111a [Pollution solution, of a sort] STAIN REMOVER. This informs the down answers intersecting the rebus squares. The key to these entries is that they’re two-part clues, the first with the rebus letters, the second with those letters completely eliminated (ID EST (61d), after the ‘stain’ has been ‘removed’).

This is a rather intricate theme, involving four elements for each themer: a rebus, an across entry, and two down entries. For the most part it succeeds very well. However, I don’t think the clue for STAIN REMOVER is good, the contrived rhyme moving it away from the mark—but this is a minor quibble. More consequentially, the first revealer struggles to convey the mechanism; I believe it’s supposed to indicate that the stain remover be applied to the contents of the rebus squares, but is that what “five squares in this puzzle do”? Or, is it supposed to be saying that those rebus squares “put on” (as one would an article of clothing) the various types of spots?

Since I’ve spent so long analyzing the theme, I’ll give the rest a relative gloss. One thing I noticed during the solve was a lot of very interesting, clever, or evocative clues. A small sampling: