Today we have a before-and-after theme in which the second of the two-word phrases always ends in OFF. 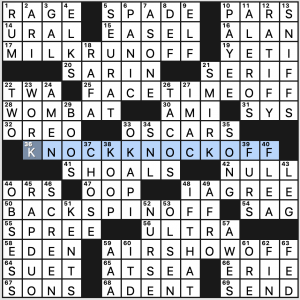 That’s a lot of duplication there, and I’m somewhat surprised it was allowed to make it to publication. Once you get the gist of the theme, you could (and I did) write the OFF part of the remaining themers pretty quickly and then deduce the rest of the entries from there. That’s a lot of real estate you’re giving away for free.

I find the theme answers to be solid enough with good wordplay, but none of them especially tickled me.

There isn’t much in the way of long sparkly fill due to the limiting factor of the central 13-letter themer and the fact that there are five theme entries. In truth, there are no entries longer than six letters aside from the theme answers.

Out of curiosity, I ran the puzzle through the XWord Info puzzle analyzer just to confirm I wasn’t missing a long answer somewhere. I wasn’t. But I also noted a pretty low “Freshness Factor” rating of 11%, a figure calculated based on the number of times words in that grid have appeared in other puzzles. Monday NYT puzzles average 18.5% whereas Saturday NYT puzzles average 84.3%. Other interesting stats: a high number of blocks (40) and a low average word length (4.74).

All that is just to say that there’s not a lot of sparkle here. The puzzle would be more fun with only four themers (probably doing without the problematic central entry) and loosening up the grid to allow some fresh fill. 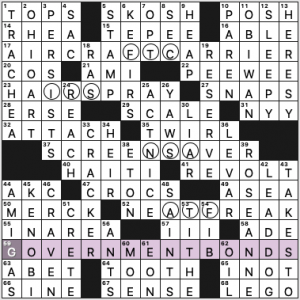 I had to find a typo and still finished in 3:05? Did this play more like a Monday than a Wednesday for you, too?

The revealer is 59a. [Treasury notes … or what the two sides of 17-, 23-, 37- and 52-Across are joined with?], GOVERNMENT BONDS, and there are three-letter initialisms for US agencies at the border between two words (or components of compound words) in the themers:

The theme’s okay in terms of execution, but having a bunch of government agency abbrevs as the added trick is like frosting a cake with kindergarten paste. It’s not as sweet and fun as you might have hoped. 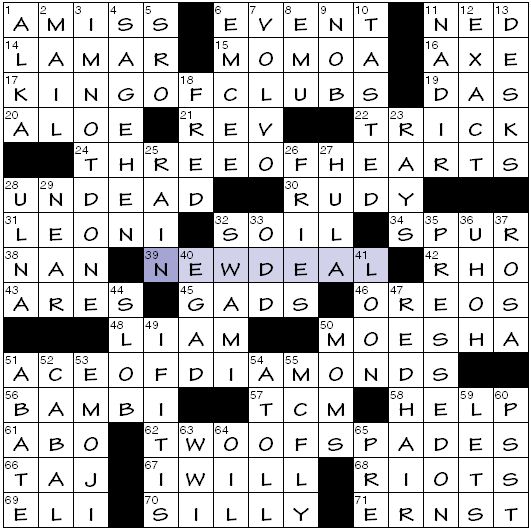 Very easy to twig to what’s going on with the theme, rendering the central revealer all but unnecessary. Then again, what’s wrong with a little extra, if it doesn’t stress the grid? 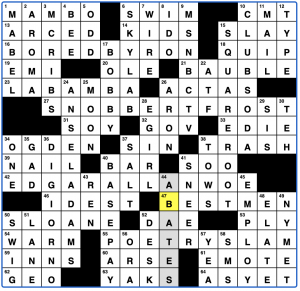 Happy Wednesday!  Paolo Pasco’s up with “From Bad to Verse (giving us the second AVCX puzzle from a constructor whose name starts with ‘Pao’ in as many weeks), and it goes a little something like this:

This felt like the perfect crossword-size version of a Twitter joke.  Paolo has slammed the poets Lord Byron, Robert Frost, Ogden Nash, and Edgar Allan Poe.  I’ll be reaching out to their estates to see if they need some aloe for those Burns.

Other things to love in this grid: 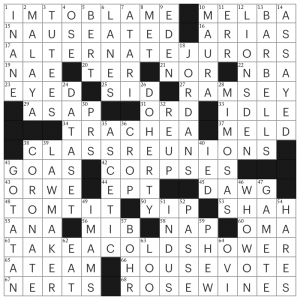 Helloooo, short write-up today! This puzzle is the rare miss for me from Elizabeth C. Gorski. Don’t get me wrong, it’s still a great puzzle and I enjoyed solving it, but the bar on these New Yorker puzzles is *so high* that a couple of minor nits on this puzzle added up to a bit of a “meh” on this one. Namely, 2/3 of the marquees are pretty “meh”, some of the fill is “meh”, and an unfortunate confluence of entries in the center made me sad. But! Some of the clues are excellent and there are definitely a few interesting entries I haven’t seen before. We’ll call it a draw.

The marquee entries today are ALTERNATE JUROR / CLASS REUNIONS / TAKE A COLD SHOWER. These first two are not particularly interesting, but I enjoyed TAKE A COLD SHOWER (although the clue on it is a little cringey: [Extinguish feelings of excitement, say]). Some of the other long-ish entries are interesting—I liked I’M TO BLAME and LION’S DEN— but the rest are also just ok. I also just could not fathom crossing CORPSES with RE-UP and IED. That seems to me like a poor judgment call, although maybe I’m just extra sensitive to this as a member of a military family.

Overall, not my favorite Gorski puzzle! Some stars for a variety of interesting entries and clues. 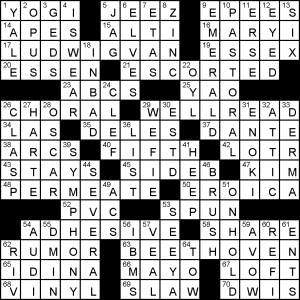 It seems Mr. BEETHOVEN, first name LUDWIG-VAN is 250 years old today. He doesn’t look a day over 180! Words sometimes used to describe/name his works are found in the grid: CHORAL, PASTORAL + SYMPHONY; EROICA and FIFTH. OPUS, CLEF and DMIN are kind of shoehorned in as well…

Some fun clues elsewhere: [The M in BLT?] is “mayo”. [Important gem in Oz] is not OPAL, but EMERALD. Different Oz!