The Fireball is on hiatus through the end of the year.

We have what appears to be another debut today. And it’s a good ’un.

The revealer is DARK / AGES (36a, [With 37-Across, fall of Rome aftermath, and a hint to the puzzle theme]). The other theme answers are phrases that have the letter string AGES in them, except that said string is “hidden” within a black (“dark”) block. The latter halves of the phrases (after the AGES) comprise their own actual entries with unrelated clues. 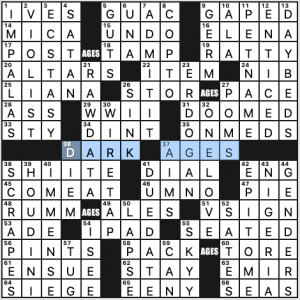 That’s a really nice set of entries with only the one plural as a minor demerit. Each phrase is easily in-the-language,* and I’m impressed that the latter halves all spell their own actual words (thereby disguising the theme further) and that everything fits symmetrically.

The theme was so well hidden from me that I didn’t see it until I was probably 85-90% done and was getting frustrated. Most of that is on me for just being on the wrong wavelength and also not recognizing the causal effect between the fall of the Roman Empire and the DARK AGES and further, not realizing there’s a G in ERDOGAN. Finally, when I realized 48a had to be RUMM, I put it all together and grokked the theme.

But that wasn’t the end of my struggles. That NW corner beat me up pretty badly. With IVES [“Calcium Light Night” composer], MICA [Mineral in sheets], LIANA [Rainforest climber], VIOLIST [Tabea Zimmermann or Cynthia Phelps, e.g.], and SATAN [Recurring “South Park” character], I was guessing left and right with little to hang on to. I couldn’t tell if [Bearers of lyre-shaped horns] was going to be some kind of animals or deities. I don’t mind a few opaque clues, but this felt like overkill, and with stale crosswordese MICA and LIANA involved, I’d rather see that whole corner re-done.

But aside from that, the rest of the grid is nicely filled despite the stacked 7s in each corner (the result of having a central themer bisect the grid). Highlights: “ADMIT IT!,” ONE LOVE, DUE DATE, PET NAME, DAYBEDS, RAW DATA, WIRETAP, HOUDINI, EPITOME, and NIGERIA.

I recognize DINT [Impact] as a word but have only ever heard it used in the phrase “by DINT of,” i.e. by means of. Nothing else stands out as iffy fill aside from what was mentioned above.

Aside from the one corner, I’m impressed with this rebus theme and the surrounding strong fill. A very nice debut! 3.9 stars.

* I recognize the term PACKAGE STORE (synonymous with “liquor store”) from my days in the military, but maybe it’s new to some solvers. It seems to be a regional phrase that originated in the late 19th century and has an interesting history.

There’s a lot of things happening in today’s NYT from Kathryn Lander (a debut! Congratulations!), but I’m not sure it all works together in a harmonious way for me. 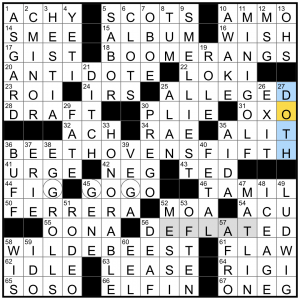 We have three circled Gs in FIG and GOGO, and some shaded squares in DEFLATED highlight E FLAT.  This is all in service of BEETHOVEN’S FIFTH (36A, “Work suggested by this puzzle’s circled and shaded squares”), written by LUDWIG (49D, “First name of this puzzle’s dedicatee, born December 1770”), who famously became DEAF later in life, per 56D) and set his fifth symphony in the key of C MINOR (2D, “Key to this puzzle’s theme?”).

From a visual standpoint, I like how the circled/shaded squares reference the short-short-short-long of the opening of Beethoven’s fifth and how the positioning of the Gs and E FLAT mirror how they would be written on a music staff, but there’s just too many different elements in play here, leaving the end result just SO-SO to me.

Well, the revealer doesn’t do much service to the “Secret” part of “Secret Theme”!

THEME: The word CODE is hidden in the first two letters of both parts of all the theme answers. 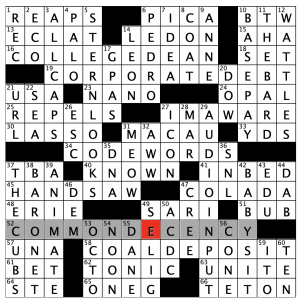 Smooth as silk grid today, with lovely entries all around. That, of course, is to be expected of anything that Brad Wilber is going to attach his name to. I solved this as a themeless for the most part, maybe grokking the theme after the revealer. I don’t remember. It’s the type of theme that the solver can appreciate mid-solve (as opposed to post-solve) and it can aid while filling if you need the nudge (you know CO- and DE- will make an appearance!)

Liked the shouty clue for ALL CAPS. I was thrown by the clue for THE CUBS [Wrigley field team, familiarly] When I see “familiarly” I usually think I’m looking for slang or elided words or somethin’. Isn’t THE CUBS the formal name of the team?

I always forget how to spell the turkey neck thingy. WATTLE. I’m going to try using that word in a sentence today while maintaining a serious tone. It’ll be fun.

Enjoy your snow day! Well, it’s a snow day for me anyway, so I assume for everyone else as well. 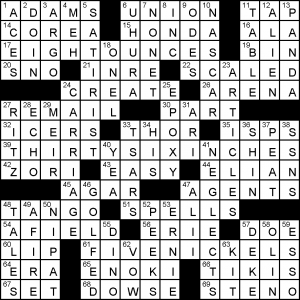 I didn’t twig to the theme at all. The phrasing is awkward and it doesn’t help the units are those esoteric Imperial ones that make no sense. You wouldn’t clue CUP as a Stanley award, but it is here: CUP, here filled in as EIGHTOUNCES. We use “metric” cups here which are 250ml… Scotland locale is an unlikely and abstruse clue for YARD; add in the layer that you must actually fill in THIRTYSIXINCHES… [Type of horse] is also a weird clue for QUARTER, and then it’s entered as FIVENICKELS. 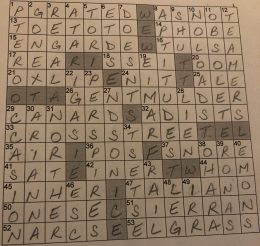 First and foremost, I hope all of you BEQ solvers have been well, and my sincerest apologies for being off the grid with this review. Hope you will forgive me.

Speaking of off the grid, today’s puzzle features a number of entries in which one of the letters to an answer has to be entered into the gray squares, hence the “Going Too Far” title — and the directions to go along with solving the puzzle. Every gray square was going to feature a letter, but it was up to you to figure out which entries needed a letter inside of the gray square and which entries would fit regularly. Once figuring that out, read the letters in the gray boxes from top to bottom and you would end up spelling out a quote from Anais Nin. And the quote is…

This was the first time I was able to attempt this type of grid (though he did a similar grid to this just recently), and some parts were much easier to navigate and figure out which entries would spill into — or start inside of — a black square than others. Probably the biggest hangup was [I]SSEI, and only after I had all the other letters inside the boxes that I just figured that the “I” had to be inside of the gray square in front of it (18A: [Japanese-American immigrant]). Being able to suss immediately that the clue for [A]GENT MULDER was referencing The X-Files (David Duchovny played Agent Fox Mulder on the show) made things much easier on filling the gray squares on the right side of the grid (26A: [Fox TV character?]). Biggest slip-up came when writing in “Tuscano” for [I]TALIANO, as my knowledge of where in Italy Florence is (along with throwing in an unnecessary “o” at the end of “Tuscan,” of course) came back to bite me (47A: [Resident of Firenze]). Fun grid, though grids such as these and the vowel-less puzzles always warp my mind and takes me so much longer to parse.

“Sports will make you smarter” moment of the day: NIT (24A: [Minor problem to address]) – Remember when the National Invitation Tournament, a.k.a. the NIT, was the premier postseason tournament in college basketball? From the (in)famous City College of New York winning the NCAA and NIT championships in the same year (1950) to Al McGuire’s Marquette team turning down an NCAA invitation to play in — and win — the NIT in 1970, the tournament has held its semifinals and championship game at Madison Square Garden since 1938. The decline in prestige of the tournament came in the early 1970s, when NBC moved the final of the NCAA championship game to prime time in 1973 and when the early rounds of the NIT were moved out of the World’s Most Famous Arena in 1977. Now it is viewed as more of a consolation tournament for those teams who did not make the NCAAs, though its prestige and history will always live on.