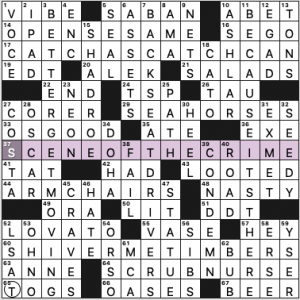 Fairly easy on the Friday scale, I thought. The grid features a matrix of six interlocking 15s: CATCH AS CATCH CAN, SCENE OF THE CRIME (psst: it’s the Oval Office), “SHIVER ME TIMBERS,” “BETTER GET MOVING” (I like this one best, for whatever reason), BACKSEAT DRIVERS (I don’t appreciate the moralistic judgment in this clue! I can’t help it if I know which lane you should be in), and “BECAUSE IT’S THERE.”

My fave fill here is SCRUB NURSE. Shout-out to all the nurses in our audience! You don’t have to be a surgical nurse for us to think you’re awesome, of course.

Wrong turn: I had BUD for 62d. [Fella], which made the crossing make no sense, as DEER is not [Some real heady stuff?]. So it’s BEER crossing BUB? Meh. BUD is better, except when it comes to beer.

Irksome overlap: 65a. [Get-up] as the TOGS clue crossing BETTER GET MOVING. There are a dozen ways to clue TOGS without touching the word “get.”

Things that being a pop culture crossword editor helps with: Nick SABAN (featured in Crosswords With Friends this year along with other college coaches who make obscene amounts of money), Beastie Boys’ MCA, and superpopstar Demi LOVATO.

Obscurest fill: 10d. [Square-cut masonry], ASHLAR. I know it only from crosswords. Good luck if you don’t know Utah’s state flower is the SEGO lily. Have also never seen 1d. [Mezza ___], VOCE. One of those things you know if you have studied music, maybe? Not quite as unpleasant for me as yesterday’s theme …

Team Fiend’s pannonica seems to be an aficionado of a certain type of SEAHORSES, the leafy sea dragons. Take a gander at this Google image search of these marvelous creatures.

Fave clue: 47d. [Center of a circle or square, maybe], STATUE. A public square, a circle within a roadway—not a geometry quiz here.

3.5 stars from me. ASHLAR, EXMET, EDT, and some other blah bits felt too broadly peppered throughout the grid for me to feel a four-star vibe. 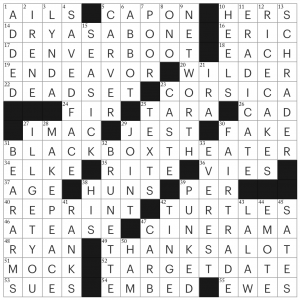 Ok folks, it’s Friday, this is not a drill. Let’s get through today and this lightly challenging Patrick Berry puzzle and then it is the weekend!

The long entries here are by and large quite good: we have BLACK BOX THEATER as the grid-spanning marquee, and then a whole slew of longish entries in the open corners that bring us: RICE CAKES / ERADICATE / I’LL GET YOU / MAKE PEACE / THANKS A LOT / TARGET DATE / DRY AS A BONE / DENVER BOOT / SAVED FACE / FAIR TRADE. Whew! Lots of good stuff in there. I have never heard a boot for a car called a DENVER BOOT (and neither has the human with whom I am sharing a couch while writing), so that’s a fun new piece of trivia. I also adored the clue on RICE CAKES [“Eating ___ is like chewing on a foam coffee cup, only less filling”: Dave Barry], which is both funny and absolutely true. I was also amused that this puzzle has the inverse of a NYT clue from today on EVEREST [The “it” of George Mallory’s “Because it’s there”]; the NYT entry was BECAUSE IT’S THERE and the clue was [George Mallory’s famous response to “Why did you want to climb Mount Everest?”]. What an odd and delightful coincidence!

I do want to call attention to one thing in this puzzle that bugged me, which is the double [Towel label in a shared bathroom, perhaps] clue for both HIS and HERS. I appreciate the “perhaps,” but I don’t think it does enough to overcome the implied heteronormativity here. Encountering these clues/entries reminded me of a quote from Team Fiend’s own Nate Cardin, who, when discussing representation in crosswords, discussed this very clue style, saying “Even in major publications it would have clues like ‘Husband’s spouse’: WIFE. ‘Towels his and ____’: HERS. I always felt that I had to put part of myself aside and pretend that I was straight in order to solve these as efficiently as possible.” This exclusionary clue style led Nate to found Queer Qrosswords, and if you have not already checked them out, I think this is the week to do it (and they make great holiday gifts!).

Overall, plenty of stars for an engaging and well-clued puzzle. See you next week! 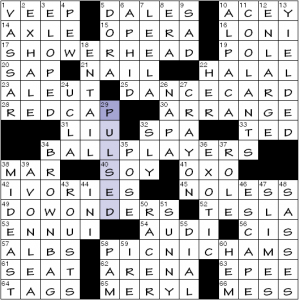 It seems the theme here is simply puns involving social gatherings. During the solve I was mystified as to what cohered these answers, but a little perspective was all that was necessary.

Moving on to the ballast fill,

The bottom left corner played significantly harder than the rest of the grid. I had to mentally placehold a few entries before I could confirm crossings and eventually get to the business of letter accretion. I’m talking about the oblique clues for BROWN BAG and IVORIES, the old-school crosswordese of 57a [Mass robes] ALBS, the tricksy 64a [States’ plates] for TAGS, the is-it-WAKENS-or-something-else that turned out to be ROUSTS from 43d [De-bunks?], and so on. Even so, this section YIELDED (13d) without too much effort, and my solve time was about average.

The theme answers are all phrases that end in a word that is also a mathematical term. 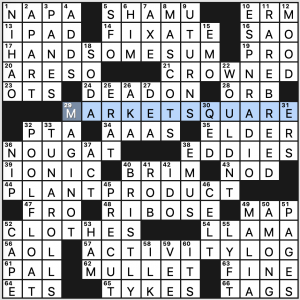 Despite my issue with the first entry, I liked this theme. What really makes it click is the title which provides the theme with plenty of wiggle room for its math-based humor.

Lots of long fill to look at. Highlights include ESPN RADIO, RARE BREED, TUNA ROLLS, POOL FLOAT, and MASCOTS. Brand new to me are MAGINOT [___ Line (French fortification)] and RIBOSE [Nucleic acid sugar]. I needed just about every crossing for those, but it is Friday, so some tougher fill is not out-of-the-blue, even for a Universal puzzle. 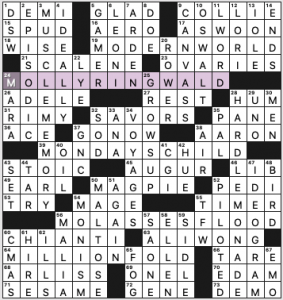 Amy here, filling in for Jenni, who is having a day (you know the kind—the classically 2020 sort of day). Wishing Jenni and everyone else a relaxing Friday evening!

I didn’t read the title or the Inkubator email about the puzzle, so I was halfway thinking it was a themeless puzzle, though I suppose seven answers in the 11- to 13-letter range and a smattering of 7s would be on the sparse side for a themeless. The theme is “Breaking the Mold,” and the five long Acrosses break MOLD in different ways at the start and finish of each phrase:

Rather a basic and unexciting type of theme, but the theme entries themselves bring some zip and the rest of the puzzle has a lot of good stuff, too.

Throughout my solve of this 16×17 puzzle, I was struck by the plethora of women’s names and references. Enjoyable! ALI WONG gets her full name into the grid. DEMI Lovato gets an illuminating clue: [Singer Lovato, who advocates against stigmatizing mental illness]. There are male-centric ways to clue ARLISS, but 68a. [HBO Sandra Oh show] gives a shout-out to Oh’s breakout TV role (interesting that she and Michael Boatman have done lots of splashy TV since then, but the white guys on Arliss have not done much). Lots of clues are on the longer, and more interesting side. 24d. [“Matilda” actress Wilson, whose Twitter middle name is “Get Rid of the Nazis”], MARA? So much cluing flavor and I am here for it.

RIMY, TARE, and ONE-L are stale crumbs, but there was a lot to like in this puzzle. 4.25 stars from me, based mainly on the enjoyment factor.