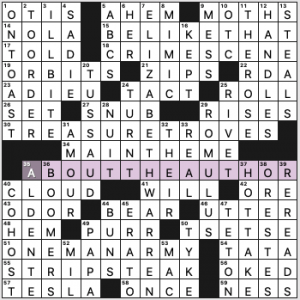 Another Saturday NYT constructor duo, another fun (but not quite Saturday-tough) puzzle.

Fave fill: “fine, BE LIKE THAT,” TREASURE TROVES, the ABOUT THE AUTHOR blurb (Andrew’s at Amazon starts, “Crossword writer Andrew J. Ries is on the cutting edge of the growing indie puzzle scene, where topics and language aren’t limited and artistic freedom reigns”), ONE-MAN ARMY, “I’LL BITE,” the great ELIZABETH WARREN, and HOT TAKE.

There’s been a lot of talk about the Bee Gees documentary on HBO, so here’s a 34a. [First track on a soundtrack album, often], MAIN THEME, “Stayin’ Alive” over the opening credits of Saturday Night Fever. (Thumbs up for the woman who just dodges street harasser Tony Manero.) I should really watch the film again. So much of it was lost on 11-year-old me. 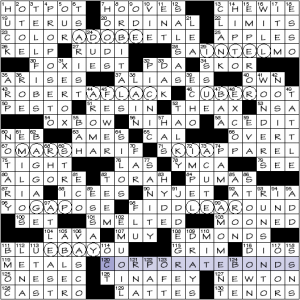 Decent mix of company types. Solid original theme phrases. Not a wow-amazing theme, but it gets the job done, furnishes the product, or whatever corporate-speak formulation works here.

Okay but not a thrilling crossword. 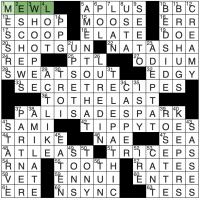 It actually took me less time to do today’s Stumper! This is a not too thorny, but it was a fun solve. I loved the stack in the middle (see below)! I always enjoy Brian’s puzzles, and this is no exception. A solid 4.4 stars.

Now you need a song stuck in your head: 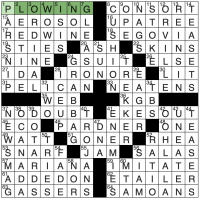 You saw that time correctly! I got this one done in under 5 minutes, which is likely a record for me! Lester Ruff’s puzzle, at least for me, was DEFINITELY “less rough!” This only means that next week will likely be murder, but I will enjoy a quick solve while I can! This shape of grid is usually easier because there are no long words: I think the longest entry in this puzzle is 7-letters long! (There are 36 of them, though! Exactly half the entries are 7-letter words!) Again, just wait until next week! But today, 4.4 stars from me.

Some stuff I liked: