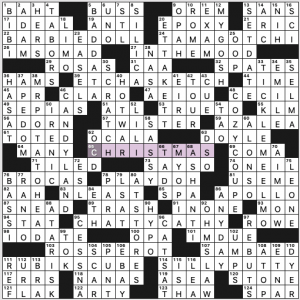 The theme is CHRISTMAS, [Day to play with new toys], and the rest of the themers are old toys (though two are games rather than a toy) clued straightforwardly. BARBIE DOLL, TAMAGOTCHI, ETCH A SKETCH, TWISTER (game), PLAY-DOH, CHATTY CATHY (manufactured for six whole years, stopping before I was born and I ain’t exactly young), RUBIK’S CUBE, SILLY PUTTY, MR POTATO HEAD, TICKLE ME ELMO, CANDY LAND (game), and COZY COUPE. The theme is incredibly broad, and there’s nothing in particular arguing for these 12 toys in particular. Eight are in the Toy Hall of Fame; four aren’t. I’ll bet you could name plenty of other toys whose names are 7, 9, 10, 11, or 12 letters long.

So I found the theme underwhelming, but the fill disappointed me even more. Very little of the puzzle felt fresh or new—was anything other than TikTOK, ASHANTI, and the movie SELMA from the 21st century? Many of the phrasal answers fell flat: BAD DATA, AT STORES, I’M DUE, USE ME, AT A RISK ([With some downside]??), SET DATE, HAS AT, IN ONE, AIM LOW? And there were dusty words, like SNEAD, OPAH, TABORS, DYER, DSO, OPA, and CLARO.

A holiday puzzle for all to enjoy as predicted!

THEME: ELF rebus. ELF is hidden in one square of common phrases. 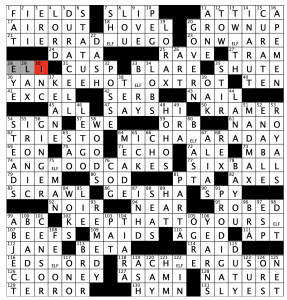 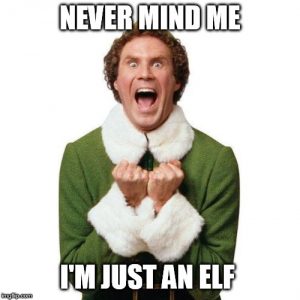 There’s one elf that’s kinda-sorta on a SHELF too… or under maybe… or in. Yeah in. Elf in a Shelf is going to be the spinoff that’s all the rage next year.

Ooh! I just remembered the note. There was another Birnholzian layer to this puzzle that I forgot to check out until just now, asking the solver to note the first letter of each of the starred clues. I’ll highlight them in blue… TOY MAKER! Seriously can this puzzle get any cuter?

Lots for everybody to enjoy here. It’s an excellent, painless introduction to the rebus-style puzzle for novice solvers and has enough bite to keep it interesting for seasoned solvers. The gimmick helped me to figure out both fill and theme answers on several occasions, which is one important mark of a solidly executed puzzle for me. Four of the answers were just a tad out of reach (tip-of-the-tongue style) for me without the nudge: TIERRA DEL FUEGO, MICHAEL FARADAY. RACHEL FERGUSON, and EDSEL FORD (despite the frequency of his name appearing in crosswords!) ON WELFARE is the unfortunate entry that stuck out as a downer to me, especially given the nature of the theme. I guess it’s a fair trade-off in order to get the TOY MAKER phrase in there.

I stumbled terribly in the Southwest, mostly because I forgot there was one more answer with a rebus (I guess I grew numb to the asterisks in the theme clues and failed to see it). EDSEL FORD. Had HORROR for TERROR, didn’t know which of the networks that ended in C aired “Mixed-ish,” rarely use or see the word ABJECT and only knew BEADLE from the first few chapters of Elie Wiesel’s Night, though the nudge in the clue was appreciated.

Overall, thoroughly enjoyed this one, and all the Christmasy clues that came with it.

The main theme entries have circled squares in their exact centers which spell out a word. This word can be preceded by the word “middle” to form another phrase. These “middle” phrases are hinted at by six other entries in the grid. 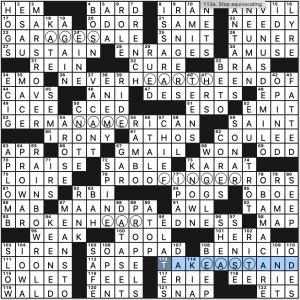 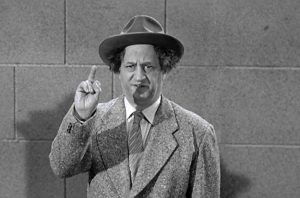 I found this to be enjoyable. And I liked the fact that all the helper entries are easily located in the top and bottom rows and not spread out in random places in the grid. 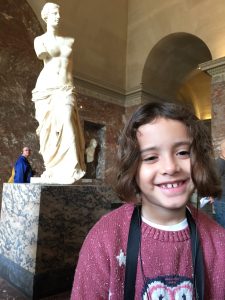 My kid with VENUS DE MILO at the Louvre

That about does it. I liked this nicely-designed and executed theme. There’s plenty of juice fill thrown in and very little kludgy fill to distract. Four stars.

The perfect puzzle to geek out on.

THEME: Programming language can be found at the start of common phrases. 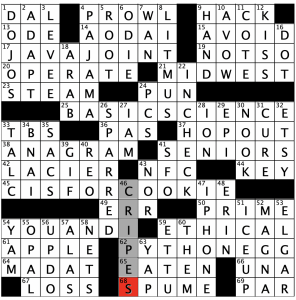 I can appreciate the puzzle, even though I know next to nothing about programming language. JAVA and BASIC are both familiar enough… even took a BASIC class when I was in middle school (and loved it!), but my career as a programmer ended there.

CIS (at least that’s what I think it is after a quick google… not C IS or C) and PYTHON are both foreign to me, but fall in the category of “glad I’ve heard of it now.”

The theme answers are not phrases I use or hear regularly either. Well, C IS FOR COOKIE I certainly adore (who doesn’t?), but JAVA JOINT, BASIC SCIENCE, and PYTHON EGG were out of my wheelhouse.

AODAI was also new for me, which I’m now seeing is AO DAI- but I checked my crosses several times before accepting it as correct. Been a while since I’ve seen B’NAI make an appearance too, but that’s solidly in crosswordese language.

Fantastic clue for ANAGRAM [Plane to Nepal?] and enjoyed the misdirection for APPLE [Cook’s place?]

Despite so many things I didn’t know, still finished in my average time range! Not super-comfortable rating this puzzle due to my own ignorance, but I’d say 3.5 stars? Not sure!

This puzzle reminded me of today’s NYT, which isn’t a good thing. When I typed out all the theme entries, I realized there’s a bit more going on than “a list of song titles that are questions.” The theme answers cover the 5 W’s (and an H) that I was taught in the journalism class I took in HS.

So we have WHO, HOW, WHY, WHERE, and WHEN (thanks to commenter Marcie for pointing out that I mis-typed the answer to 38a, thus doing the puzzle a disservice). That , makes the theme significantly strong than the NYT and the fill is better. That latter is a low bar, but I’m not reviewing the NYT, so I’ll stop here. I enjoyed the variation in the theme answers. Questions 1 and 6 were gimmes. I’ve heard 3 and 5 but couldn’t dredge the titles up without crossings. 2 and 4 were completely new to me. That’s not a complaint. I also realize that it’s a feat of construction to come up with that many titles that fit the brief and fit the grid. Not a bad way to spend eight minutes of my Sunday.

What I didn’t know before I did this puzzle: that BRENDA Lee was called “Little Miss Dynamite.” I also didn’t know that DON HO sings a song called “Pearly Shells.” Got it without crossings anyway because who else would sing a song with that title? And I’ve never seen “Despicable Me” so I didn’t know its cast included an orphan named AGNES.