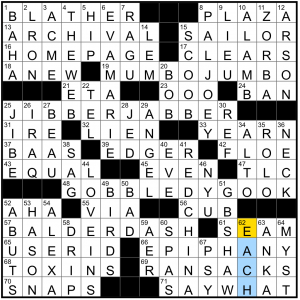 Oh wow, Sarah Keller! I thought it had been a while since I’ve seen her byline, and indeed it’s been two-plus years since she was last blogged about here. (Then again, I took a nine-year hiatus from constructing, so I shouldn’t talk.) Nice to see the name of someone I used to interact with on the regular back when we were both members of CrosSynergy.

Anyway, this NYT theme doesn’t need much explaining. There’s a revealer, but I’m not sure it adds anything, since the theme is clearly within the clues. It’s all a bunch of blah-dee-blah:

I guess now that I think about it, 71A [“Huh?”…or a possible response to 1-, 19-, 25-, 48-, and 57-Across] is not so much a revealer as a way to make 1A feel like part of thematic symmetry. I don’t think it adds anything to the fun of the theme, which IMO comes from the fact that words for nonsense are all fun to say in your mind.

The grid has lots of 6- and 8-letter entries, which feels unusual for a Monday and the fill is pretty clean despite that. Bravi. On the other hand, between EVA MARIE Saint, PAL JOEY, GB SHAW, and ZORBA, the puzzle feels a little…ARCHIVAL, shall we say? ALEXA and PSY weren’t enough to balance that out for me.

At 2:25, this felt a smidge harder than the average Monday for me. Which leads me to something easier… 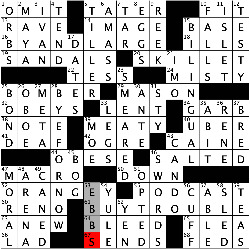 Ever notice that the word “homophone” is just a letter change away from “homophobe”? Once I was group-chatting at work and mentioned “this really cool homophone” and I raised some virtual eyebrows for a minute or two until people figured out what was going on. Eek!

Anyway, homophobes-with-a-B are bad! But homophones-with-an-N can be really fun! This puzzle has four of them, and I’d say they’re all RIGHT if nothing to WRITE home about. See what I did there?

Breaking the trend of LAT Mondays of late, this puzzle has no revealer, so you need to go back and see that the first syllable of all four theme entries sounds the same:

They don’t feel like the freshest or most evocative entries one could have chosen for this theme. In fact, I kinda want to remake this theme with BYE FELICIA and BUY BUY BABY and perhaps BICUSPID and BY GEORGE. I guess my theme for today is that I’m in my 40s but would like to hang onto some semblance of youth.

The fill is nice and smooth. Not a single clunker entry to be found.

Today’s theme answers have the letters ICE separated by ever-increasing numbers of letters as we go down the grid. The revealer is ICEBREAKER (56a, [Get-to-know-you game, and a description of this puzzle’s theme]). 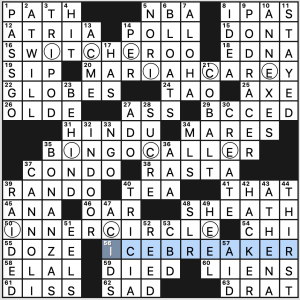 I really like how the ICE letters are separated by one other, then two, then three, then four other letters, as if an iceberg was chopped into three and the pieces drifted apart. That’s an elegant touch.

Speaking of which, have you heard about the massive iceberg heading toward a south Atlantic island and threatening the colony of penguins living there? Something to keep an eye on in the near future.

None of the fill caused me to scowl although it felt like there were a lot of initialisms, especially in the center: NGO, MLS, AAA, BCCED, and NBA. Clues were Monday-straight allowing for a relatively quick solve.

Barbara Lin’s Universal crossword, “Is It Soup Yet?” — pannonica’s write-up 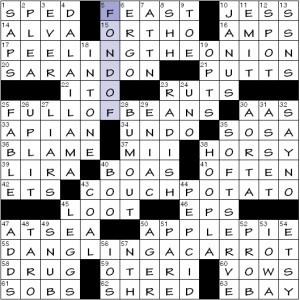 Phrases ending in ingredients one might use for soup.

Yes, these are all soupy items. 47d [Stirs into the pot] ADDS. I’m put in mind of those prepackaged soup mixes. Some of them are bags or boxes of dried beans, lentils, and the like, while others are fresh produce such as this: 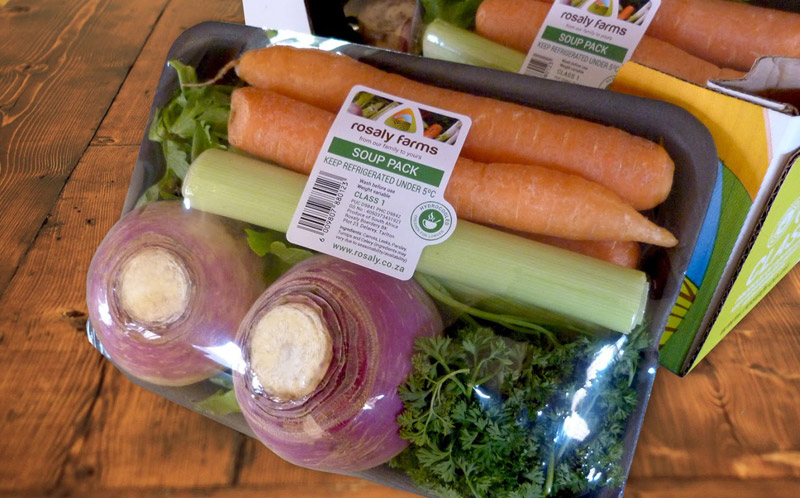 No RUTABAGAS in this crossword, however. Nor celery for that matter. However, there is 23-down [Pungent salad root] RADISH, which is a not-uncommon soup ingredient. 48d [Poi ingredient] TARO is also not-unheard of for soup. Little distracting. More food with 50-across APPLE PIE, but that’s not quite as close to the theme; nevertheless, it is a bit distracting. Conversely, 5a [Lavish meal] FEAST—located top center—is a nice bonus for the theme.

Crossword’s okay, but a bit too loose and muddled for this solver’s palate. 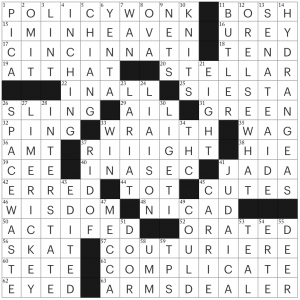 This is a super ambitious and gorgeous grid! And it very much works, except for one tiny corner I’ll get to later. But for the most part, I am in awe of this beautiful square pattern and the wide open corners that mean this puzzle has *twelve* ten-letter entries. Whew!

Counter-clockwise around the grid, which is the order in which I solved this puzzle, the 10s are: POLICY WONK / I’M IN HEAVEN / CINCINNATI / SPACE WASTE / LIME RICKEY / INTERSTATE / COUTURIERE / COMPLICATE / ARMS DEALER / OR ELSE WHAT / SENATE AIDE / HYDRANGEAS. These are uniformly excellent! I didn’t know the word COUTURIER or Elsa Schiaparelli, but other than that, the 10s are familiar, crunchy phrases, most of which are clued at a challenging Monday New Yorker level. My favorites of these entries are POLICY WONK and OR ELSE WHAT. I also really loved RIIIGHT, which confused me at first (what kind of word has three I’s in a row??), but which made me laugh out loud when it clicked.

Overall, tons of stars for an ambitious and crunchy grid. See you on Wednesday! 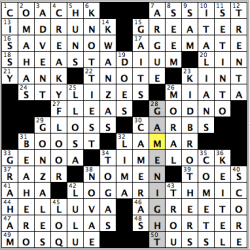 Good day, everyone! Hope all is well to begin the penultimate week of 2020!

Definitely a tough one to crack into for today’s themeless, and, oddly enough for this solver, a couple of the sports-related entries were the ones that tripped me up! I knew 1D immediately, but put in “Sissy” instead of CISSY (1D: [“___ Strut” (1969 hit by the Meters)]), which then made COACH K, a.k.a. Duke University men’s basketball coach Mike Krzyzewski, harder to see (1A: [Sports Illustrated’s 2011 Sportsman of the Year, colloquially]). Then there was not putting together that the date mentioned for SHEA STADIUM would/should correspond with a World Series date (in this case, the New York Mets winning their first Fall Classic) instead of some volcano or other geological episode (18A: [It erupted on October 16, 1969]). At least GAME NIGHT (28D: [Go time?]) , referring to the board game Go (which I’ve played all of once in my life), came a little faster, which was necessary given that NOMEN, for some reason, did not pop in my mind  for its clue until getting that crossing…and slapping my forehead once seeing it completely filled (38A” [“Octavius,” in Octavius Caesar]). There were definitely highlights in the puzzle, especially LOGARITHMIC (42A: [Like some nonlinear scales in mathematics]) and one of the many nicknames of Kendrick LAMAR (32A: [Rapper also known as Cornrow Kenny]). However, definitely was grossed out upon a) seeing torture supporter GONZALES(29D: [Ashcroft’s successor as Attorney General]) in the grid and b) seeing his name cross something associated with Muslims, MOSQUE (49A: [Building with a minaret]). Definitely a GOD NO from me on that one (28A: [Adamant refusal]).

“Sports will make you smarter” moment of the day: ASSIST (7A: [Dime, in the NBA]) – Hope you knew some basketball slang in knowing a “dime” is referring to an assist ,(the pass that directly leads to a made basket), a statistic that has been tracked in the NBA since the beginning of the league back in the late 1940s. Those who are casual fans know that John Stockton of the Utah Jazz is the all-time leader in assists, but who holds the NBA record for assists in a single game??? That answer is Scott Skiles, who had a whopping 30 assists in a game almost 30 years ago today, on Dec. 30, 1990, as a member of the Orlando Magic against the Denver Nuggets. If you think that Magic great and NBA legend Shaquille O’Neal was on the receiving end of a lot of those passes, then you’re wrong; Shaq was a sophomore at LSU at the time!

Thank you so much for your time, everyone! Have a great rest of your Monday, and hope you have a good rest of your week!