This is Conrad, helping out usual blogger Laura this week. This week, we’re told, “The answer to this week’s contest crossword is a six-letter word.”

There are two vertical themers:

There are also six Z’s in the grid, about six times more than frequency distribution would indicate, per Mechapuzzle. The six Z’s are clearly meta-related, since we’re looking for a six-letter answer, plus you catch Z’s in bed.

The keys to solving the meta: how to apply ONE MINUTE to “each square,” and what is the “standardized amount” of SNOOZE time?

I made two mistakes that turned a snooze-length meta solve into a day+ struggle: I tried to turn every grid square into a minute, leading to numerous dead rabbit holes. Related dilemma: does “each square” include all the squares (225, including black), or just the 186 in the actual grid? Yes, I counted. I also suffered from an odd technological blind spot: I assumed the “standardized amount of snooze” time was 10 minutes, since that’s what my Android phone defaults to. This led to time spent fruitlessly applying a variety of 10-minute offsets to the grid.

I decided to sleep on it and went to bed (by 12). Revisited the grid the next morning and retraced my steps. Convinced I had the right rabbit hole but wrong application: I focused on SNOOZE. I Googled “standard snooze time”, and discovered that it’s actually 9 minutes on most devices (including iPhones and Siri) except Android phones, and has been that way since General Electric-Telechron released the 9-minute “Snooz-Alarm” in the 1950s. 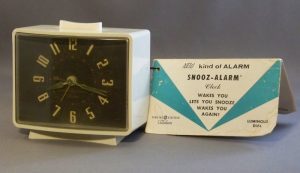 Westclox’ competing 5 or 10-minute “Drowse Alarm” never caught on, so we’ve been snoozing for 9 minutes instead of drowsing for 10. 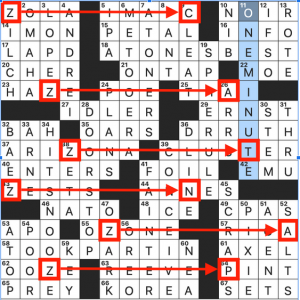 Thankfully, Matt provided his Android (and Westclox)-owning solvers with a lifeline by including ‘9’ in the title. Also, he used the number 9, not the word “nine,” hinting at math. And the Z’s are on the left of the grid, leaving plenty of room for horizontal addition. Armed with 9: I went back to the grid. Adding 9 minutes to each “Z” (including the black squares) spells CATNAP, our meta answer.

I thought it was a well-constructed and thoroughly enjoyable meta with a solid “click”, and a satisfying “aha” moment. Let us know what you think in the comments; I’m also curious how many solvers shared my snooze alarm blind spot.