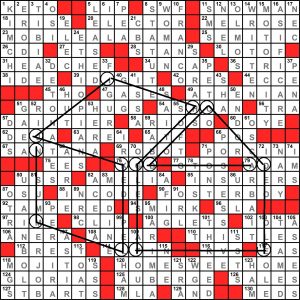 Crossword Nation puzzle solution, No. 499: “Where the Holiday Heart Is”

Good day, everybody! Just a few days until Christmas Day, Boxing Day and Kwanzaa. Here is hoping you are all doing well today during this festive season.

I’m sure many of you will agree that it really does not feel like the holiday season until you come across a holiday-themed puzzle from Liz, and she definitely does not disappoint with this grid, which is a Sunday-sized adventure! After solving all of the clues, one needs to notice that each of the letters in the circles is a letter between A and N. From there, you connect the dots alphabetically and you’ll find a THREE-D (101D: [Like this puzzle’s connect-the-dot drawing]) rendition of where we want to be for the holidays, HOME SWEET HOME (120A: [Site of many holiday celebrations in 2020, hinted at by the starred answers]). Even more, some of the clues are starred, and their entries end up being multiple-word answers in which the first word can come before the word “home,” and, if I’m right, the second word, in one form or another, can be paired with the word “sweet.” (Or “Sweet Home,” in the case of Alabama.)

Lots of fun to be had in the grid, and definitely hope that, post-COVID, that there will be a lot of group hugs in that home once all of the relatives make it there. Only real spot of bother came with the intersection of AUBERGE (125A: [French inn]) and MARIMBA, but I remember coming across the latter when I mistakenly misidentified a vibraphone as a xylophone in a Facebook post and the did research on it afterward (95D: [Xylophone cousin]). Why include one awesome WOMAN (9D: [“Pretty ___” (Julia Roberts flick)]) in a grid when you can pair noteworthy women with the same name, just as we see with GLORIAS (124A: [Estefan and Steinem]) and SARAHS (29D: [Singers Vaughan and McLachlan]). If I ever heard of the term OSCAR BAIT before, it could not have been more than once, and it could not have been anytime in the past decade or so (61D: [Films created to earn Academy Award nominations]). I would feel almost inclined not to watch a movie knowing that it would fall into the category…not that I watch a lot of movies to begin with. Like the African touch with ETHIOPIANS in the grid and the word they use for “Christmas” during their celebration of the holiday (24D: [Addis Ababa residents, many of whom celebrate Ganna on January 7]). It would be easy for me to talk about all of the accolades of the World’s Fastest Man, retired legend USAIN BOLT, but that would take an eternity (80D: [World’s fastest man]). I don’t have an eternity, so I’ll leave you with a quick nugget…

“Sports will make you smarter” moment of the day: SNOWMAN (11A: [He’s made of frosted flakes?]) – Cute clue, am I right?! For those who have tired of a lot of golf terminology and themes in grids, here’s one last one to digest and put away before you come across it in a grid. A snowman is also golf slang for carding an 8 in any given hole. (Of course, a snowman looks like the number eight.) 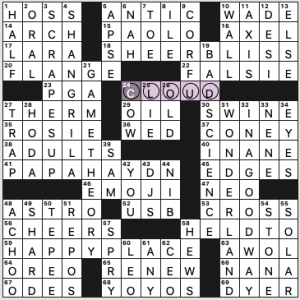 We’re looking at a puzzle that dispenses with symmetry in order to center a big “9” that’s drawn with black squares. The circled/shaded word emerging from the top of the 9 is CLOUD, referring to cloud nine, and the other theme answers are SHEER BLISS, HAPPY PLACE, SHANGRI-LA, and WONDERLAND. A bit weird to have nonthematic 9s and 10s in the grid too, but I presume the big “9” wanted to be surrounded by lots of white space, which means longer fill. Interestingly, there is nothing to highlight those themers—I might have wanted to see those clues set off with asterisks. What say you?

Fill I appreciated: PAPA HAYDN, GAME THEORY, BAD SCIENCE (looking at you, Andrew Wakefield), and IN A GOOD WAY.

Oh! Fun digression: I’ve always enjoyed the Try Guys, going back to their days at BuzzFeed. Their latest video has the crew going up against constructor and magician David Kwong, racing to see if four people can finish one Monday NYT puzzle (as a team) faster than David can solve four Monday puzzles. Video below.

Four stars from me. Nice switch from the usual “here’s a basic wordplay theme you’ve seen dozens of versions of already” sort of Tuesday theme.

Theme: Christmasy terms have synonyms for “father” hidden in them. The revealer is FATHER CHRISTMAS (59a, [Britain’s equivalent of Santa, and a hint to the circled letters]). 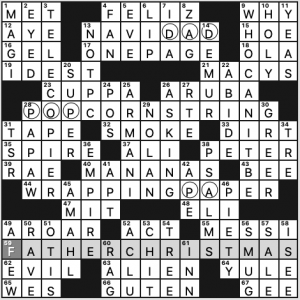 I do love the phrase FATHER CHRISTMAS. It’s so much more endearing than Santa Claus or Kris Kringle. That said, I didn’t get a lot out of this theme which feels very light. The title feels inapt as well, since the only family members in this family are fathers.

I’d be much more interested in a theme which listed other names for Santa Claus from around the world. This site has a good list. My favorite has to be the Japanese “Santa Kurohsu” who seems to be a love-child of our Santa and Col. Sanders.

The long fill consists of TELECOPIER (meh) and WHO CAN IT BE? which really feels like it’s missing a “now” at the end—at least for someone who grew up in the 80s. 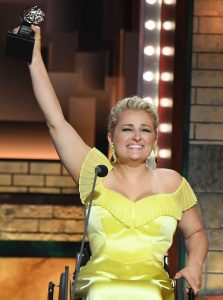 Speaking of which, most of the references in the puzzle are decades old, such as the “Who’s on First?” routine (WHY), “Miracle on 34th Street” (MACY’S)—granted, it’s a Christmas clue, “Norma RAE,” a fax machine, Gilbert and Sullivan’s Princess IDA, pitcher NOLAN Ryan, actress GREER Garson, D&D co. TSR which hasn’t been around since 1997, the opera “AMAHL and the Night Visitors,” OTIS Redding, and Scott Joplin (RAG).

In contrast, there’s ELI Manning, Lionel MESSI, and WES Anderson. The most interesting (and new-to-me) name is ALI [Stroker who won a 2019 Tony for “Oklahoma!”]. She is the first wheelchair-bound actress to appear on a Broadway stage and to win a Tony. 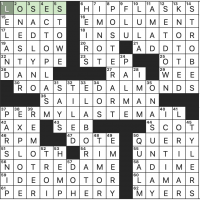 We have a themeless this week, which is fine. I have seen enough holiday-themed puzzles. There is an entire thread of holiday-themed puzzles on the Cracking the Cryptic Discord server, so I am good! This one wasn’t too bad, either, but after the Boswords themeless league, this seemed like a walk in the park! (I think that Boswords league is coming back in February or March, so yay!) I actually learned a new term or two in this puzzle, so all is good! 4.3 stars. 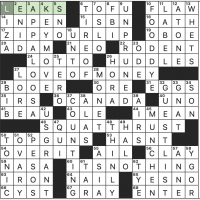 Yes, a big goose egg for 2020 is quite apt. Hopefully 2021 will be better, but I have a feeling it may get much worse first. I still don’t know anyone personally who has succumbed to this virus; I hope it stays that way. I am getting negative, so let’s turn it back to a positive tone: this was still a fun puzzle! And yes, puzzle solving is one way I am keeping my sanity during this time. 4.5 stars just for the therapeutic benefit! 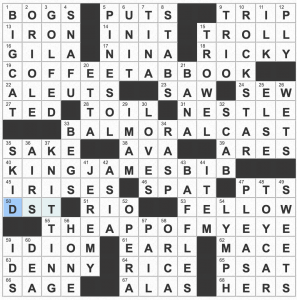 Had a hard time getting excited by this one. It’s probably a combination of being annoyed by the applet, having my five-week notices due for student report cards, and finishing seasonal shopping at the same time. But this one felt a little on the blah side. I found KING JAMES BIB the most entertaining of the answers.

The title/revealer is kinda strange too. The word “Wrestle” is now being parsed as “Wrest -LE.” I mean, sure! Just… funky.

Enjoyed the clue for KNITTING, and despite knowing neither JEREMY or DENNY, I was relieved that their names were inferable enough.