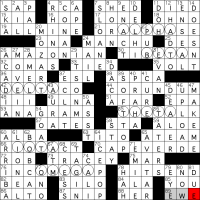 hello and welcome to episode #655 of matt gaffney’s weekly crossword contest, “Six Letter Entries”. for this week 3 puzzle, the instructions tell us that the answer is what you’ll be after solving this meta (I hope). what is the theme? from the lack of hyphenation in the title, we are meant to look at six entries relating to a letter, rather than at the six-letter entries in the grid (of which there are twenty). i confess i was distracted by the fact that the bottom-right corner of the grid includes both YOU and EWE, homophones of the letter U, as well as EYE (“I”). but that’s not especially relevant, as there are no other entries like that.

so what is the theme? six symmetrically placed medium-length across answers (not necessarily all the longest answers) include a hidden letter—a hidden greek letter:

a couple of quick notes here: BETA and THETA themselves also contain ETA, the 7th letter. BETA can be disambiguated by noticing that the theme entries appear in alphabetical order (in the greek alphabet), and BETA comes before DELTA but ETA does not. ETA and THETA are still technically ambiguous, although it seems clear to take the longer one. also, hats off to matt for not including any stray instances of other greek letters such as MU, NU, PI, XI, CHI, etc., which are short enough that they could easily sneak into a grid by accident. that’s clean meta constructing right there.

okay, so the bad news from here is that i don’t know what to do with these six greek letters. they don’t spell anything; ABΔΘIΩ (approximately, “abdthio”) isn’t a word and doesn’t even really anagram into something approaching a word. i thought we might use their ordinal numbers (1st, 2nd, 4th, 8th, 9th, 24th) in the grid somehow, but looking at the letters in the correspondingly numbered squares gives SARHEM, which isn’t anything either.

the grid is a bit oversized at 17×17, which is larger than matt would typically need to include six medium-length theme answers, so i would bet that there are six more theme answers somewhere, each corresponding to one of the letters. each of the six theme answers we already have does share a row with another medium-length across answer, but i can’t see any connection between them. i’ve tried looking for the usual suspects like anagrams, or anagrams with a letter added/deleted/changed, without success. i’ve looked for hidden greek letters in the clues… nope.

i’ve looked at the letters left over in the original theme answers after the greek letter is removed. it was never especially likely that these would be related to the meta, since matt would have very little freedom in choosing these because there aren’t all that many phrases containing hidden greek letters to begin with, but he could have chosen extra hidden theme answers to match the leftover letters. alas, he did not.

so i’m well and truly stumped. i am going to feel dumb if one of the ideas i had was the right idea and i didn’t see how to follow through on it, but i suspect it’s actually something i just didn’t think of. oh well. it hasn’t been my best year for solving metas, but you know what else it hasn’t been the best year for? the world. on the bright side, i usually take the last week of the year off due to holiday travel, and this year i won’t be traveling, so maybe i can redeem myself next week.