Theme: Fs are added before Ls in well-known phrases. 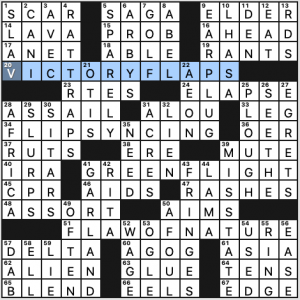 This theme is fairly wide open. There are quite a few L-words that are still words when preceded by an F (lair, lush, lick, lint, loss, lake, etc.). But since there’s no other constraint and many options to choose from, I would hope that the puzzle’s entries would be LOL-funny. Unfortunately, I didn’t find myself chuckling much during the solve (okay, VICTORY FLAPS isn’t bad). Some of those other words I listed seem to lend themselves more easily to humor (HAIR FLOSS, anyone?). These entries are fine, but just that; I’d hope to see more sparkle or else some added constraint.

In the fill, RAT TRAPS is the most interesting entry with EAR PLUG and GARLAND holding second place. I hesitated to put in SPARELY [In a thrifty manner], but I guess it’s a word, even though “sparsely” has almost the same meaning and much wider usage.

A solid puzzle. But with a wide-open theme, there’s room for more humor. 3.5 stars. 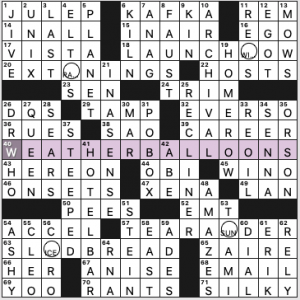 Okay! Another rebus puzzle landing on a Wednesday rather than a Thursday, and it felt sort of Thursday-tough to me even though I figured out the rebus quickly.

The revealer is WEATHER BALLOONS, 40a. [Carriers of meteorological instruments … as suggested by this puzzle’s theme?], and the circled squares can be viewed as little balloons. Each of them contains a weather-related word in rebus form: RAIN, WIND, ICE, and SUN. Here are the rebusoids:

Minor gripe, which I didn’t notice till after I finished the puzzle: the IN ALL/IN AIR repeat of IN. Bigger gripe, which I did notice: [Long-running sci-fi show, for short], DR. WHO. It’s just not an entry that should be used, since the title is Doctor Who and the character is The Doctor. Clued about as well as can be, but it doesn’t buy forgiveness for the entry. 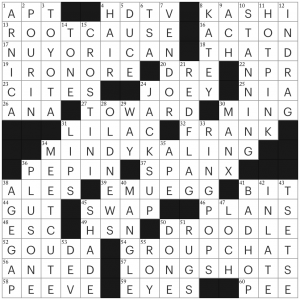 Happy christmas eve eve, to those who celebrate! Today’s puzzle from Natan Last took me longer than it probably should have, but I enjoyed most of it. The long entries are fun (except for STANNING, imo), and I learned something new with NUYORICAN, a term I had never encountered before and which was not totally intuitive but ultimately makes sense. We also have MINDY KALING, ROOT CAUSE, GROUP CHAT, LONGSHOTS, and MEET-CUTE. All fun! The NUYORICAN corner was really tough for me because I had never heard of ARNICA [Sunflower relative used in some homeopathic balms] or the mineral mentioned in the clue for IRON ORE [Goethite, for one] either. I also had NOTE instead of TONE for [Step on a scale], so this corner took an eternity to untangle. But I got there!

I’m not a fan of the term STANNING to mean [Being devoted to a celebrity, in modern slang] because of the origins of the term in an Eminem song about a “stalker fan” who kills his pregnant girlfriend when he doesn’t get attention from the celebrity he is obsessed with. I recognize that language evolves and the term can also be used totally innocuously, but I personally avoid it. Also unusual to see references to Il DUCE (a fascist) — he hasn’t shown up in a NYT since 2013.

Overall, plenty of stars for a fun (and more than moderately challenging) puzzle. See you on the 25th! 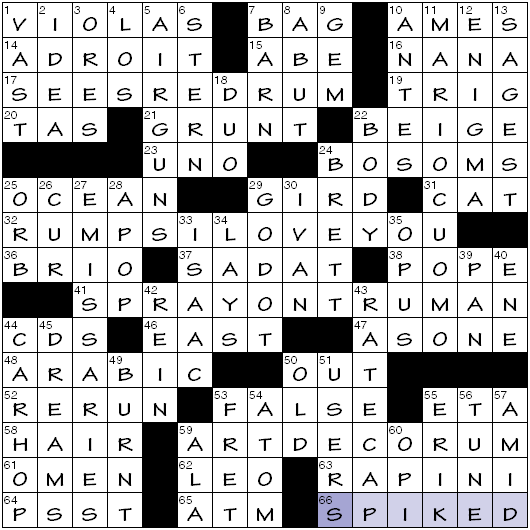 As you can see, my estimation is that the theme—which I appreciate for its festive timeliness—has some significant flaws.

Now looking for a musical selection to conclude on, and I’m going to be a bit lazy about it by falling back on Monk (sort of). 50a [ __ to lunch] OUT. 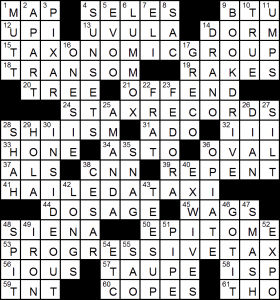 Today’s puzzle is not a unique one, but it has a strong visual element. PROGRESSIVETAX is clued as a [Rate-rising-with-amount levy…] which made my brain bleed whilst reading it. The letters T-A-X move from left to right a-la the “man walking up stairs” puzzle. Another curiosity: the puzzle is only 14 letters wide; unusual design decision.

Not a whole lot that’s notable, for better or worse, in the rest of the grid: EVOO has not yet conquered crossword puzzles completely, though perhaps it is just a matter of time! LUMMOX is just a fun word to say or to write. 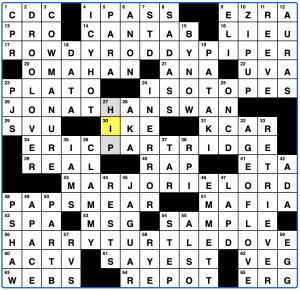 Happy Wednesday – it’s Christmas Eve Eve, and there must be some holiday magic in this grid because this was a rare Byron AVCX I was on the same wavelength with:

As soon as I connected ROWDY RODDY PIPER and the (11th) in the clue, I knew what was going on.  Each “gifted individual” has a last name that matches one of the items given in the 12 Days of Christmas.  I wasn’t familiar with most of these people (save Piper, who’s great in “The Live”), but knowing that was the hook was enough to work each of them out with the crossings.

Have a wonderful rest of this holiday week!