The Fireball is on hiatus through the end of the year. The Thursday WSJ puzzle is the weekly contest appearing a day early due to the holiday. You can assume the same will be true next week. The contest will end Sunday night at midnight (ET) as usual. 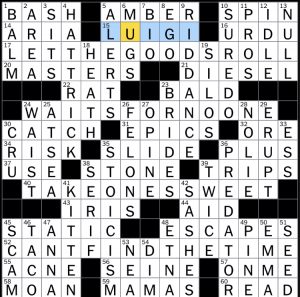 A Merry Christmas Eve to all celebrating!  Let’s make this quick – I have cookies to bake and a family Zoom to prep for, but I always have a few minutes for the crossword. Today’s is from Billy Ouska, who’s making their NYT debut – congrats Billy!

Where has the TIME gone?  No, seriously, where has the time in the phrases LET THE GOOD (TIME)S ROLL, (TIME) WAITS FOOR NO ONE, and TAKE ONE’S SWEET (TIME) gone?

My initial thought for “Half of a 1960s folk/pop group” at the bottom of the grid was going to be SONNY, but the MAMAS (of the Mamas and the Papas) also works just fine. 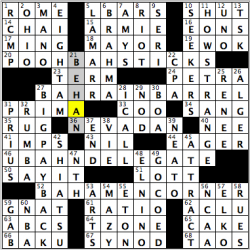 Good day, everybody! Hoping all of you are well and in the merriest mood that you are able to muster. If not, I hope circumstances around you can improve, and that I seriously have you in my thoughts regardless.

Today’s grid gets into the Christmas spirit…if the “spirit” is to be dismissive of the holidays! Four theme entries are turned into puns when adding the letters “BAH” consecutively inside of more common phrases/nouns.

There is a pretty decent chance that the intersection of BEHAN (21D: [Irish poet Brendan]) and PRIMA might have tripped up a solver, and only coming across the latter a few times saved me from a complete guess in that area (31A: [New Orleans Jazz bandleader Louis]). That ALGER (26D: [Spy Hiss]) and PETRA crossing is also devilish (24A: [Jordanian ruins site]). Underrated fill of the day is T-ZONE, and, I watched so many of those commercials for facial scrubs back in the day without knowing that there was a collective term for that area (64A: [Oiliest part of the face, to dermatologists]). Love some Springsteen here, but seeing The BIG PAYBACK only makes me think of one artist who put real purchase behind those words: James Brown (27D: [B-side to Springsteen’s single “Open All Night,” with “The]). However, one of my favorite hip-hop groups of all time, EPMD, also produced a hot track with the same title, along with a similar-sounding beat to James Brown’s number.

“Sports will make you smarter” moment of the day: LOTT (51A: [Football Hall of Famer Lott]) – As good as the San Francisco 49ers offense was during the 1980s and early 1990s, winning four Super Bowl championships in a nine-year span from 1982-1990, what gets overlooked during the team’s dynastic run was their stout defense, which was led by safety Ronnie Lott. Coming into the league in 1981 after an All-America career at USC, Lott would end up with 63 career interceptions while making the NFL All-Pro team eight times during his illustrious career. Oh, and then there’s the story about Lott having his left pinkie finger amputated in 1985 not long after it was crushed while making a tackle, deciding on the amputation instead of a bone graft surgery that would have caused him to miss the 1986 season. OK, that’s enough gore for the day!

Thank you so much for your time, everyone! Have a great rest of your Thursday, and hope you have a good holiday weekend! 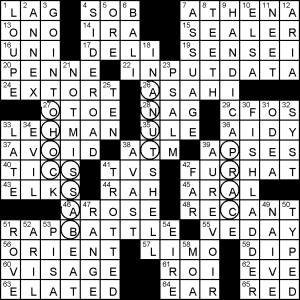 I like the idea of the puzzle, an uphill FISHLADDER, but the execution was spotty. The choice of theme answers, particularly GOINTOHOCK and NOTMISSABEAT, were quite stilted-sounding. The fish chosen: COHO, BASS, TUNA and CARP; also felt uneven, with COHO a more specific fish than the others.

RAPBATTLE is a choice long across morsel, but mostly this grid was too crowded for such.

Sorry for the delay! I’ve been an elf all day and still not done, so quick write-up from me!

THEME: Gandalf quote can be found when combining the first words of themers. 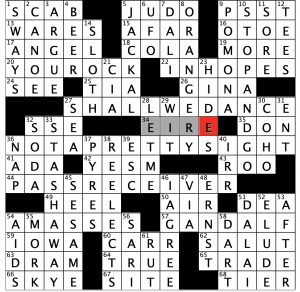 There are more than a few “common knowledge” topics that I know nothing about. Star Wars is one. Most things in the sports world are another. And Lord of the Rings is yet another. I have nothing against any of these things, and I’m sure I would enjoy them. But I was never properly introduced.

So this solved like a fun and quick themeless for me!

Fun clue for CARR [Apt-sounding surname for an Uber driver]. I’d prefer that over someone I’d never heard of with that surname. Also I’m a sucker for “apt surname” clues. Speaking of apt, I never find it not funny that the [DMV animal in “Zootopia”] is a SLOTH.

I’m sure a lot enjoyed this one, especially since I did without knowing a darn thing about GANDALF (I wrote GANDOLF initially).