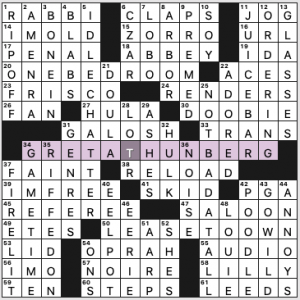 Merry Christmas to those who celebrate! Wishing you a peaceful holiday or a peaceful “well, we can’t go out to the movies and a Chinese restaurant—now what?”

Fave fill in this 70-worder: DOOBIE, GRETA THUNBERG (here’s how long and exhausting 2020 has been—I needed a ton of crossings to JOG my memory as to who was named Time’s Person of the Year about 53 weeks ago), GAME TIME, RIFFED ON, DOULA, “NOT BAD AT ALL,” and JUICE BAR (I had the last 5 letters in place and filled in SPACE BAR before I looked at the clue).

NORAD tells me Santa is flying over the Gulf of Mexico right now, heading to New Orleans after dropping off gifts in Ciudad del Carmen. “… and to all a good night.” 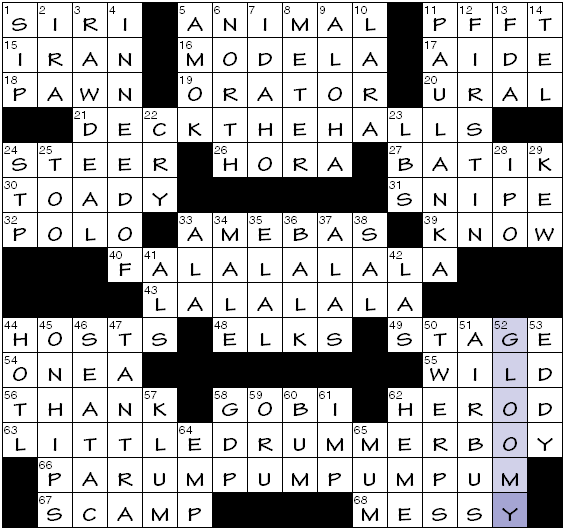 Coming in hot and heavy with a crossword that isn’t quite as annoying as what its theme evokes. A small selection of those Christmas tunes heavy on the redundant refrains in this 16×15 grid with bilateral symmetry.

Have a good holiday, people!

It looks like we have a debut today so congratulations are in order. We’ve had a lot of new names lately all over the crossword world, and it’s been fun to see!

Today’s title also doubles as the revealer. Each theme entry contains a body of water spelled backward and highlighted by circles. 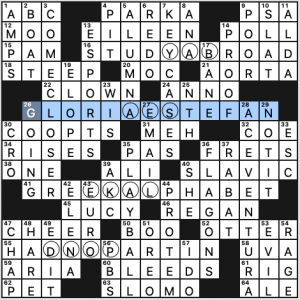 Solid work. It only took filling in two of the entries and a glance at the title to figure out what was going on. That helped to put together the final two entries.

Beyond the theme there’s fun fill like ACE VENTURA, “PLAY BALL!” and “COME CLOSER” which might come off as creepy, but the clue avoids that vibe with [Words after “I can’t hear you well”]. I also like ESPORTS, SLAVIC, and the word FLAGONS. If you’re inclined to use KEY CASES, you probably liked that as well, but I don’t know anyone who uses one.

A solid start to a budding crossword career. 3.5 stars.

I’m not usually one to listen to pop music, but it is Christmas, and it is GLORIA ESTEFAN. What can I do? Here’s a deeper cut from her Christmas album. 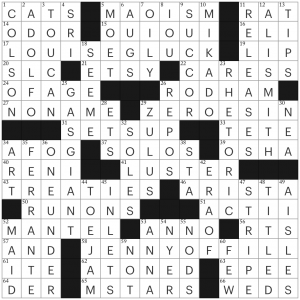 We have arrived at the New Yorker’s year-in-review puzzle week, where there will be a daily puzzle recapping 2020 in X. I’m not going to review all of these (who has the time!), but I’ll stick to M/W/F. Today’s in 2020 in Literature, appropriately from constructor Anna Shechtman, who is “a Ph.D. candidate in English literature and film and media studies at Yale University and a senior humanities editor at the Los Angeles Review of Books,” per her New Yorker bio.

The “theme” entries for 2020 in Literature are:

That’s a lot of “theme” material! I think using AND and NOT to squeeze in two more themers is hilarious. As an uncultured brute, I knew very few of these, but the crosses were all totally fair, so I learned a lot from this puzzle and have developed a 2021 reading list. Thanks Anna! The fill suffers a tad from the constraint of squeezing in all of these themers, but it’s hard to rate a year-in-review puzzle like a standard crossword, so I’m not going to stress about it. Instead, I’m going to go have another Christmas mimosa. Happy holidays to all who celebrate, and see you next week!