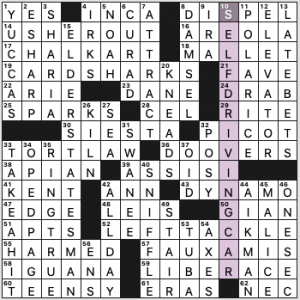 You know that feeling when you have a couple key crossings, just enough to point you towards a great answer that turns out to be wrong? That was me with 52a. [Protector of a quarterback’s blind side, often]—LINEBACKER fit the letters I had in place. Alas, ’twas a LEFT TACKLE. Would I have known that if I’d seen The Blind Side?

Unexpected tidbit of the day: 57a. [Words in a foreign language that bear a deceptive resemblance to those in another, like the French “décevoir” (“disappoint”) and the English “deceive”], FAUX AMIS. I know the synonymous English term, false friend, much better.

Such a handsy puzzle: 19a. [Ones making good use of the hands?] clues CARD SHARKS (a hand in a card game). 10d. [Something for which a dealer might tell customers “Hands off!”] clues a SELF-DRIVING CAR. Can you buy one at a dealership now? Then there’s 20d. [Works with the hands], KNEADS, and also 27d. [“Hands Across the ___” (John Philip Sousa march)], SEA. 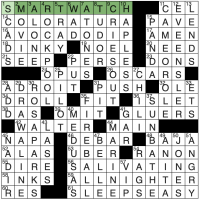 My good friend Kyle has this week’s LAT challenge puzzle! This one took me a little longer than a normal Saturday LAT – was the puzzle harder, or was I just savoring the solving experience? I’ll go with the fact that both could be true! Loved this puzzle! I saw some words I haven’t seen in quite a while (see 14A below!), but lots of fun stuff and I feel like I actually got smarter after solving this one! Lots of great info in the clues. I think the difference between constructors and solvers is that constructors love the clueing process, and I don’t! But in reality, good clues make a good puzzle and great clues make GREAT puzzles. I totally enjoyed the clues on this puzzle, which again is part of the reason my time was a tad higher: I seriously felt like I was enjoying this one while I was solving! I’ll take puzzles like this one any day! 4.5 stars from me.

Those comments (which skew slightly towards the longer entries!): 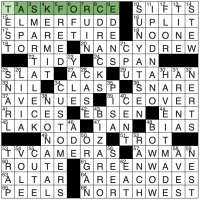 I thought this week’s puzzle was going to be thorny. I was right! After last week’s easy run, this was a sticky one. The NW corner fell last for me; if there WAS an easy area, it was in the lower regions of the grid. Some of the center parts were hard because I had an error in the grid at 47A (see below!), but once that was fixed there was the sure sense of accomplishment that the Stumper does provide. This goes along with a fascinating webinar I watched on MIT Mystery Hunt-type puzzle solving this past week: They specifically mentioned a rush of endorphins, and I think that is what happens to a degree after getting through these tough Stumpers. Keep ’em coming! Nice puzzle, Doug! A solid 4.6 stars from me.

A few comments (I’ll try to keep it to ten, but there are lots to choose from!):

THEME: Phrases where the second word is a step in a card game 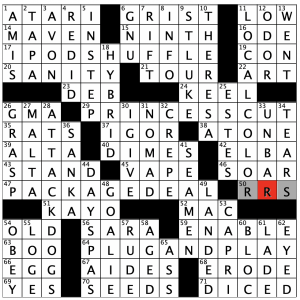 Based on the title, I was expecting something specific to poker, so I didn’t see the theme until it was over. Liked it though! Solid in-language (even if the iPOD SHUFFLE is no longer a thing…) colorful themers.

I shaved about a minute off of my average time on this one, so I found it fairly easy. Either that or I need to solve in bed shortly after waking up more often. I think it’s more because the grid is super smooth and there isn’t a heckuva lot of Crosswordese. Liked LOCAL COLOR. It’s symmetrical partner, ATTACK DOGS, conjures up images of a junkyard. Was movie was it… Stand By Me? I want to say it was… with an ATTACK DOG scene? I dunno. I can see the gist of it in my head.

Fun start to the day. 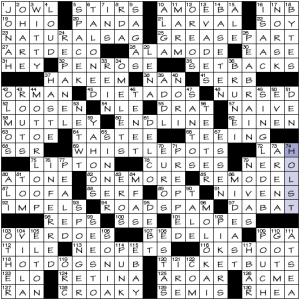 Today we get multiword phrases wackified by reversing the letters of the final, or ‘back’ word.

These are mildly entertaining. I would not be surprised that this—or a very similar—theme has been done multiple times before, not in the least. But that has little to do with the quality here, which is fine.

Have a calm Saturday.