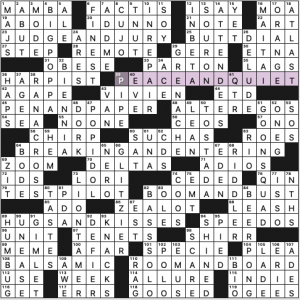 About to leave to pick up my Lou Malnati’s pizza (sorry, Matt, but I know your brother sent you some so I think I’m off the hook), so super-quickly: Theme is X & Y phrases, clued via familiar “partners” phrases:

Solid theme, though not one with any inherent “aha!” or “ha!” moments.

Did not care for the fill. The constructor’s on the newer side and his standards for fill will surely rise. (The editors’ standards are apparently static.) There were some nice bits like BUTT-DIAL, BEER PONG, and HUMBUG, but also too much in the way of MAJS ABOIL DEFIER OGEES, etc.

3 stars from me. Go listen to some Rihanna, Mariah Carey, Alicia Keys, Dolly Parton, or the Who, and then enjoy the PEACE AND QUIET afterwards.

***The meta for this puzzle is time consuming, but well worth the elbow grease! In other words, if you’ve given up on it, I would definitely encourage another look-see before reading on***

THEME: Notable quintets… with a meta. 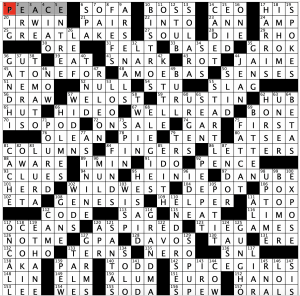 Seems a little light on theme, right? That’s what I thought for a hot second, anyway. And although I should know better by now, part of me couldn’t help but think this was gonna be a piece of cake meta, despite the curiously over-sized grid, the lack of apparent density in the theme, and the fact that it’s a Birnholz puzzle.

In the print version, a little 5×5 empty grid, ala NY Times Mini Puzzle,  accompanies the main puzzle. This little bugger seems innocuous, and I very wrongly assumed I would have it filled in no time. Wrong. But the many AHA moments that eventually led to its completion were well worth the effort. I’ll do my best to explain, but suffice it to say, while it’s not the most complicated meta, it is complex.

STEP #1: Determine what each notable quintet consists of.

This part is easy!

Easy, right? I mean, the theme clues flat out say that the lakes go in Row A, the senses in Row B, etc. And a nudge clue in the puzzle specifically tells us to look at first letters.

Well, the order of the lakes is famously HOMES, but what of the others? Is there a Spice Girl order? What about the oceans? Is there a mnemonic acronym for them that I failed to learn in fourth grade?

So this is where the first AHA really comes in.

Step #3: Read the clues. Many times. All of them. While searching for key words.

In my Spice Girl googling (yeah, I had to look them up. For shame!), Posh stood out to me. She stood out because I had just finished solving the puzzle and I distinctly remembered reading the word “Posh” in one of the clues. It’s one of those words you don’t see all that often. Sure enough, 116A the clue is [Posh ride to a film premiere]. I wonder if other Spice Girls are hidden in other clues? Yup. And once you turn the key on this piece of the puzzle, there’s no going back. I had noticed some of the weirdness in the wording of the clues along the way, but I chalked that up to Evan’s unique cluing style (though in retrospect I shoulda sniffed it out ahead of time… glad I didn’t though).

This is very time consuming (for me anyway) as I had to comb through each of the clues for each component of the quintets. I discovered how short my attention span truly is as I could only search for a couple at a time. They were buried quite well. But it was worth it. I liken it to Ralphie in A Christmas Story when he’s decoding the Ovaltine advertisement in the bathroom. I got more and more excited the closer I got. Anyway, here they are:

Step #4: Examine the answers to the clues of note.

The next AHA comes into play realizing it’s the corresponding first letters of the grid entries that need to be entered in the 5×5 grid. So they are…. (I’ve included a grid for the visual as well, courtesy of Evan) 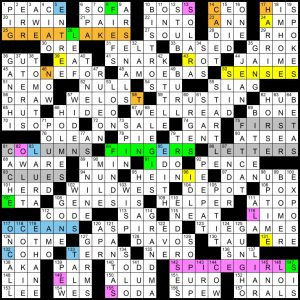 Step #5: Look at first letters of those answers.

So now what? Well, clearly those are the letters that go in the grid, but in what order? They’re only five letters each, and here is what my brain initially anagrammed:

Step #6: Figure out how those letters fit in the 5×5 grid

Turns out I was correct on only one of these, so it was still difficult to fill the 5×5 grid with any satisfaction. But I knew Evan wouldn’t leave anything to random chance, so I reexamined the first letters of each of those entries as they appeared in grid order. Another AHA. 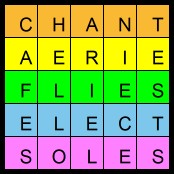 Next (Yes! There’s a “next”!) we are directed to look at the columns in the correct 5×5 grid and treat them as if they’re clues based on the hints in the grid at 81/93 Across.

Step #7: Determine what to do with the resulting words that appear in the columns of the 5×5.

AHA! There are clues in the big grid that work for these!

HELLO = 18D [What one may say upon walking through the door]  I’M HOME!

TESTS = 157A [Some academic hurdles] ORALS

So? What’s the answer???? All you have to do is look at the first letter of each of the initial answers for those clues and you’ll get BINGO! soon enough.

This is beyond brilliant. It is definitely my favorite of the year. And probably in my top ten of all time list.

Exhausting? Yes. Even explaining it is exhausting. But wow.

For those who don’t like solving metas, please remember that it stands alone as just fine (if a touch drab) on its own. But I really hope this one gets the accolades it deserves.

I have more to say, but I’m spent.

P.S. Evan sent along this note with the puzzle that’s a bit of a Easter Egg:

This is the puzzle that I wanted to run on my 5th anniversary of starting at the Post on Dec. 6, but it was impossible for a couple of reasons: 1) I had a work crunch and had to submit two puzzles during the week I was to submit the Dec. 6 puzzle, and 2) I only thought of the idea maybe two days before the first of those two puzzles was due. I thought it was better to wait and get this right instead of rushing and getting it wrong.

It’s not so often that we see bi-partisanship come out of Washington D.C., but we’ve got it on display in this puzzle at least. Each theme entry adds a D or R to the already-present D or R in well-known phrases. 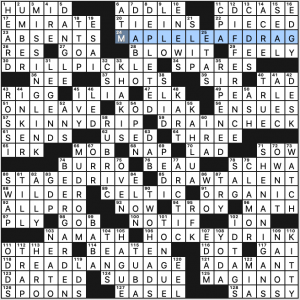 Four Ds and four Rs. Well balanced. I also like that there are no extraneous Ds or Rs in any of the entries. That constraint probably nullified more than a few good possibilities. Oops, I spoke too soon. There’s an extra D in the last entry. Oh well.

I don’t think I LOLed at any of these, but neither did I scowl. These were solid without being torturous. I liked the first one best.

I don’t usually get too bothered by clue words duping entries, but there are a couple here that were unusually noticeable. “Beer” is in the clue for theme answer 106a and in 74d BEER GARDEN. Likewise, “language” is in theme answer 118a and the clue for 101d TONGUE [Mother ___ (native language)]. I would certainly try to avoid that kind of duping when theme answers are involved.

Top fill: MISSING LINK, SHENANIGANS, the aforementioned BEER GARDEN, MUD ROOM, KAHLUA, and KHAKIS. TWO HEADS feels like a long partial as clued [They’re better than one, it’s said]. Maybe [Features of some giants] might have worked as well? I also like the word RUBRIC, and I want someone to make a punny toy-themed puzzle to include RUBRIC’S CUBE. Get on that!

There are a few bits of crosswordese as usual, like GO A and ILIA, but these are easily glossed over. 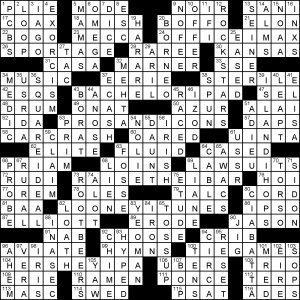 Eye Exam is the title, and eight phrases have an “i-” added to the beginnings of the second word. Sometimes these are in brand names, two of them from Apple; sometimes they make words: icon, ideals; and then there are PA to IPA and BAR to IBAR. The least effective change for me was LOONEYITUNES. Since the word “looney” has no inherent meaning, the pun falls flat.

Prediction: that top-right corner will play quite mean, between SEINER/SANI/NOAA and ELON, which felt like it needed to be some kind of U abbr.

There’s not always a lot that’s easy to recall after a 21x puzzle, but ROCKSTARS clued as [standouts…] felt breezy.