The title is a less common but legit idiom, so it makes a good basis for a theme. The theme answers are well-known phrases with an added -IN at the end. 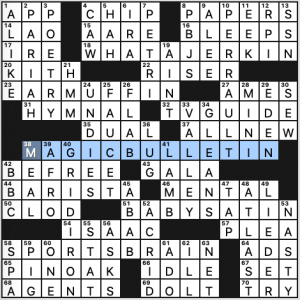 These are fine entries, but what gets me is that the clues quash any chance at humor. WHAT A JERKIN is a funny answer, but the clue is too run-of-the-mill; it should have equal liveliness and wackiness. My take: [“Thy sleeveless garment is most comely!”?]. There’s not one but two perfect examples of a MAGIC BULLETIN from the Harry Potter books: The Daily Prophet and The Quibbler. And that EAR MUFFIN clue is pretentious when it should be humorous. My take: [Waxwork breakfast treat?]. Okay, maybe that one fails the breakfast test…in more ways than one.

In the fill, GRID IRON I know and like (especially crossing SPORTS_), but PERRAULT [“Tales of Mother Goose” author Charles] I didn’t know. I worked it from the bottom up, and so I was trying to shoehorn newsman Charles Kuralt in there. TV GUIDE, BARISTA, UNDIES, PARIAH, and “AT LAST!” are other niceties.

I’m no fan of the AARE river at 15a, and being in such a small section of the grid, it looks like it can easily be replaced. The other stumbling block was LIEDER [Schubert works], which is completely new to me. The word is the plural of Lied, German for “song.”

Not a bad theme and grid. But I think the theme cluing could’ve done more to add to entertainment value. 3.4 stars. 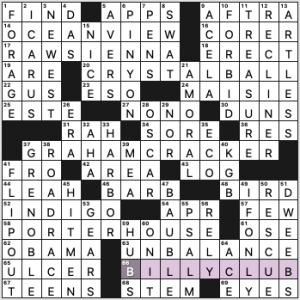 Our revealer in this maybe-harder-than-usual Wednesday offering is BILLY CLUB, 66a. [Nightstick … or what might form if the beginnings of 14-, 20-, 37- and 58-Across started paying dues?]. Those four themers begin with words that double as the last names of famous people named Billy:

I’m not wild about an all-dude theme set, but at least they’re a diverse foursome.

Did not know: 24a. [___ Dobbs, title detective in Jacqueline Winspear books], MAISIE. I haven’t read much in the mystery genre since my Agatha Christie youth, but if you’re into that 1920s British vibe, check out this series. 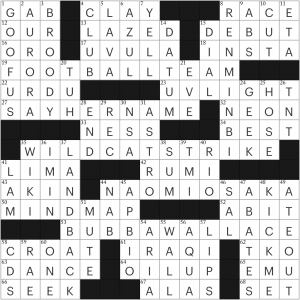 Team, it’s finally almost over. The next post I write will be from 2021. I know things won’t magically change overnight, but it just feels like we may finally be turning the page on this horrible year. And if 2021 brings with it more New Yorker puzzles like the ones we got to experience in 2020 along with its fresh start, well, that would be 100% fine by me.

Today’s puzzle is (one of?) the last of the Year-in-Review holiday puzzles from the New Yorker, and this time we have Erik Agard with 2020 in Sports. Now, I love the Pittsburgh Steelers, but other than that, I can’t say I know much about sports. But even with my limited sportsing and narrow focus on one particular black-and-gold team, I found this puzzle totally accessible. The theme entries were:

This puzzle does a great job of highlighting how sports and social activism collided in 2020, with all of the long entries relating to an action by an athlete or team to use their prominence to call attention to police violence and/or systemic racism.

Overall, buckets of stars from me. SEE YOU IN 2021, INTERNET FRIENDS! 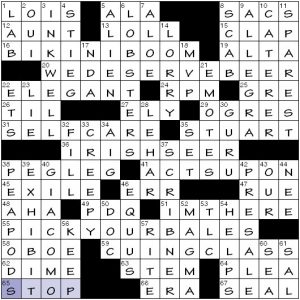 I had thought that ‘cutoff tees’ were the same as crop tops, but some internet searching failed to confirm that; instead, it seems that term may refer to tee shirts with the arms cut off, which results in a garment that’s akin to a tank top, but fuller.

Regardless, in the context of this crossword, what’s happening is that doubled letter Ts are removed from familiar phrases for—it’s hoped—wacky results. Unfortunately, for this solver, the authors ERR (46a) in a serious way on the first one.

Check out those mega-overlaps in the first and last two themers! 8 letters. That’s some serious stuff.

Anyway, aside from the uber-dubious first salvo, the theme is quite entertaining and good.

So, to tie everything together again, here’s some inversion behavior in the vampire squid (nb not a true squid): 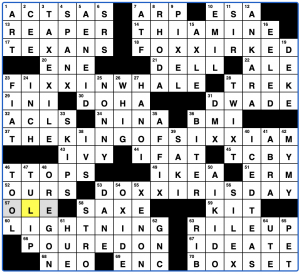 I caught that something with XXI was happening in all of the theme entries in the grid with FOXX IRKED, but didn’t fully process how this worked until I got to DOXX IRIS DAY and realized that without the XXI, we had DORIS DAY.  Similarly, without any of the other XXIs, we have FORKED LIGHTNING, FIN WHALE, and THE KING OF SIAM.

BEQ’s grid ACTS AS a great primer into the breadth of musical fill – in addition to Nikki SIXX in the theme clues, we have INI Kamoze (whose “Here Comes the Hotstepper” topped the Billboard singles chart in 1994), we have ARP synthesizers, NINA Simone, BMI (“ASCAP rival”), Matador Recordings’ catalog listing code (a new way to clue OLE), BOX SET (“Completist music fan’s purchase”, which I assumed would be B-SIDES), and DMX (“‘Ruff Ryders’ Anthem’ rapper”).

We have a synonym theme today where each theme phrase ends in a word that can mean “speedy.” The revealer is POSTHASTE (56a, [With immediacy, or a hint to the four other longest puzzle answers]), where POST seems to be indicating “after,” or in other words, the tail end of the phrase. 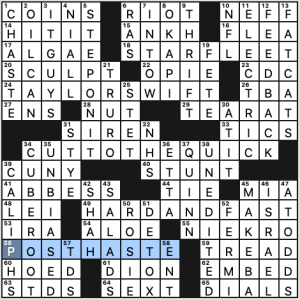 That’s a nice set of themers. My only gripe is that HASTE is a noun where all the theme’s keywords are adjectives.

The 13-letter central entry results in large corners which are filled pretty well with one exception. I like the theme-adjacent “STEP ON IT“as well as FAT CATS, ELECTRIC, and CUBE ROOT.

The challenge in this grid is its proper names. In the northwest NIALL and TRURO were tough but gettable. Same with NEFF in the northeast. What was brutal was the mash-up in the southeast: QUINN / NIEKRO / MAKEBA. The only one of those I was reasonably sure of (once most of the crossings were in place) was MAKEBA [Folk singer Miriam known as “Mama Africa”]. The others I had no idea about and ended up guessing wrong with QUINT / TIEKRO. (Quint was the boat captain in Jaws; no idea why I went with that name over the more common QUINN.) Oh yeah, FERMI‘s in that corner as well, but most people should be able to suss him out with a few crossings. My point is: Do try to avoid crossing proper names, and definitely don’t cross three or four names.