“It’s with a very heavy heart that I inform everyone in the crossword community that we have lost a most remarkable figure in puzzle construction with the passing of Gail Grabowski on Christmas eve in Peru, Illinois. Her husband Gary was with her, and the end of her battle for life was peaceful.

I was immensely privileged to have collaborated with her on over 175 puzzles over the past 10 years, most in the Los Angeles Times and The Crosswords Club. But Gail was an indefatigable constructor, and also had many hundreds of solo puzzles in Newsday, USA Today, CrosSynergy, and several other markets. She did all the cluing on our collaborations, and her fine work made her a particular favorite with the L.A. Times Crossword Corner bloggers.

She will be sorely missed by editors, collaborators, and solvers alike.”

The Fireball is on hiatus through the end of the year. And like last week, the Thursday WSJ puzzle is the weekly contest appearing a day early because of the holiday. 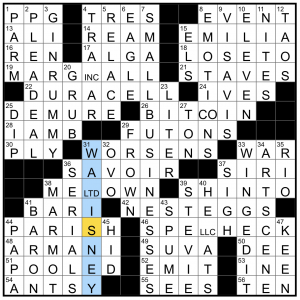 David J. Kahn has prepared a tribute to SMALL BUSINESSES (7D, “Local economy makeup … or a hint to this puzzle’s theme”), and it manifests in four squares that affect four sets of clues:

We’ve got four common abbreviations for businesses (INC, CO, LTD, and LLC) crammed into the small space of one rebus square each.  Small businesses!  I totally figured that’s what was going on as soon as I hit 7D, but that didn’t stop me from tripping myself up trying to figure out what phrases could accommodate LLC and LTD.  Overall, this is nicely constructed but didn’t blow me away like some other Thursdays this year. 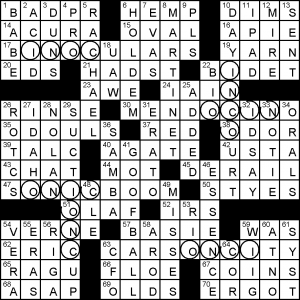 There are 4! or 24 ways to arrange the letters COIN. Five are found here. There was a decision to go for six examples (two intersecting pairs) and two more acrosses with a short revealer, rather than four or five examples and say COINTOSS. I’m not totally sure which makes the better puzzle. Even though BINOCULARS was personally targeted, I enjoyed the answers like SUCTIONCUP, CARSONCITY & DAYINCOURT more where the letters span the parts of the answer. I’m a non-American, but have vaguely heard of MENDOCINO county, in the Redwood Empire. Nice to see some “local” content in the LA Times!