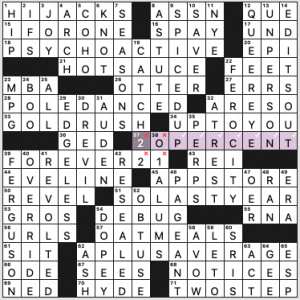 So often I feel cheated out of a themeless puzzle when the Friday or Saturday puzzle sneaks some thematic material into the mix, but I really enjoyed this. And that’s even with the .puz file insisting that the numerals in my grid were wrong! Screw the file format wanting me to, I dunno, spell out the words so that two-zero-two-one can look dumb. So the middle four squares contain the numbers 2 0 2 1, and the Down crossings work with the numbers:

It’s executed well, and the rest of the puzzle has a proper themeless vibe (even though the word count is 80 rather than ≤72. Fave fill: PSYCHOACTIVE mushrooms served with HOT SAUCE, DR. EVIL, “UP TO YOU,” APP STORE, “SO LAST YEAR” about to sound like a huge insult, A PLUS AVERAGE, FERGUSON Missouri, SPICED UP, QUEER EYE, and UNPERSON.

Four stars from me. Happy New Year, everyone! Wishing us all a smooth, healthy, happy 2021.

Shoutout to the awesome Team Fiend members who gave me a break from blogging while I dug out of some work stuff. I’m back, it’s a new year, I have ten days of vacation, and this is a terrific puzzle! Let’s start with 69a: [With 47-Down, popular Nintendo game, or a hint to three locations in this puzzle]. The answer is ANIMAL/CROSSING. Before I got to the revealer, I inferred from the title that the theme was “animal names that bond two words together.” I’d found three Across themers and thought I had it. CROSSING and [location] made me go back and look again. Aha! 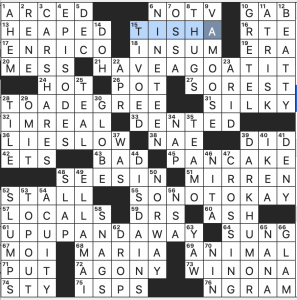 This is brilliant. All the theme answers are solid, the concept is original, and it’s well-executed. Brava! From now on, I’ll be excited when I see these young constructors pop up in the bylines of my puzzles. Can’t wait for more!

What I didn’t know before I did this puzzle: that ELLA MAI won a Grammy in 2019, and the J. Lo recorded a song called I‘M REAL. And now for more moose content.

Happy New Year! Things can’t get much worse than 2020, so let’s get this year off to a Good Start!

Each theme answer has an added PRO at the start; there are no CONs to be found in this grid. The revealer at 52a is BRING IN THE PROS [What to do when more expertise is required, or a theme hint]. 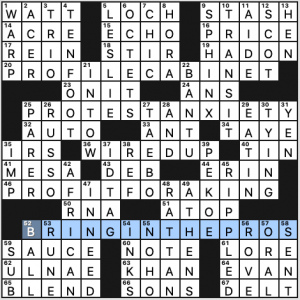 I’m more accustomed to hearing “bring in the professionals,” but obviously that wasn’t going to fit in the grid. I’m cool with the shortened form.

The theme is wildly wide open, though. There are so many possibilities, and I’m sure I’ve seen this done before (probably more than a couple times). That said, these are fine choices and I don’t have any qualms with any of them. I like PROTEST ANXIETY most of all; that seems like something people felt in 2020 when trying to make their voices heard but still worrying about social distancing.

Beyond the theme, there’s a definite AFRICAN vibe with SPHINX and BANTU. I also liked a TEN FOOT pole, LESLIE Nielsen (surely, you can’t be serious), and WIRED UP.

Clues are straight over the plate, making for a quick solve. Clean fill and an upbeat theme make this one enjoyable. 3.6 stars. 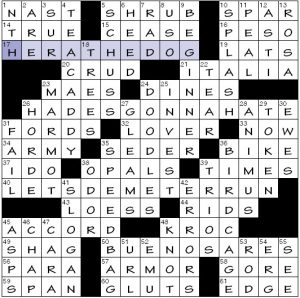 Puns employing the names of Greek gods, because why not?

Two goddesses, two gods, all from the group of 12 Olympians. That’s solid.

Aside from the deity angle, there’s nothing linking the new or old phrases together. But that sort of second-level cohesion is rare to find in crosswords, is probably too much to be expected.

Okay, on to the rest of the fill.

All right, that’s all I’ve got. Good theme, the crossword overall played a little tougher than the average Los Angeles Times Friday, but that is by no means a bad thing. 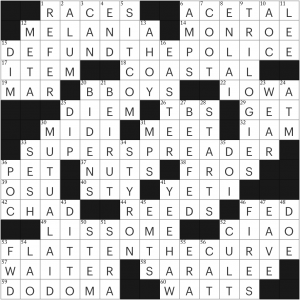 Happy New Year, everyone! Technically this puzzle is from yesterday, but there isn’t a new one up today, so let’s consider this “2020 in News and Politics” puzzle to be the last hurrah of a bygone year. This will be a short write-up because it’s a holiday and I want to go enjoy it, so:

As has been the case all Year-In-Review week, that theme material is *dense*, which tends to constrain the fill of the puzzle, leaving us with some iffy entries. But because the purpose of these puzzles is to pack in as much content as possible, rather than to make a standalone perfect themeless, the fill gets a pass from me. This puzzle manages to pack some of the best and worst moments of 2020 into a 15×15 grid, and I’m deeply impressed that it manages to do so with a set of 15/13/15 marquees. Natan Last, closing out the year with a bang.

Overall, lots of firework-shaped stars from me. Now if you’ll excuse me, I have a mimosa to get to.