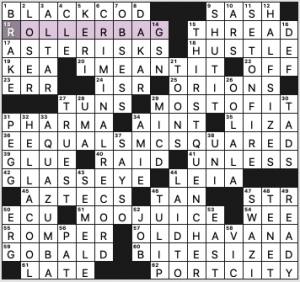 This 16-square-wide puzzle took me more than an extra 1/15th of my usual Saturday NYT solving time. More “Huh??” clues than is typical, and there’s some fill that didn’t want to reveal itself to me. This new year is off to a weird start but I am 2-for-2 at correctly typing “2021” in the dateline. It took me most of January to get used to “2020”! I have been beyond ready for this new year.

Straight to the list, as it’s a holiday and I’ve lost the paragraph vibe: 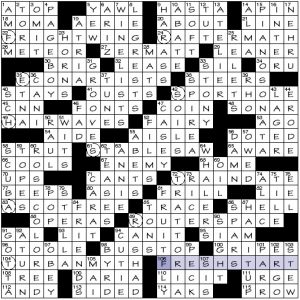 As you may have now surmised, I wasn’t thrilled by the theme in execution. It is an awful lot of content. Nevertheless, I very much appreciate the context and the overall sentiment.

Going to keep the write-up minimal, so just a few highlights.

So I’ll finish with this, which is not exactly memorable musically. Just can’t resist the names and titles, though. “New Beginnings”, from Old Departures, New Beginnings by Trainwreck:

I mean, how could I not? 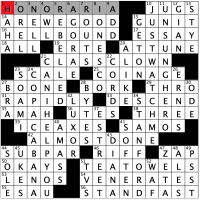 I count 68 words in this grid. (OK, I didn’t count; CrossFire did!) Other info from CrossFire: This grid is only a Q short of a pangram! Very nicely done. Not too hard; my solve was just under 7 minutes. That is totally subjective, though. I am not replicating tournament conditions, and I am still super slow solving on a computer. I have no idea why, since I have solved literally thousands of puzzles on a computer at this point. I should practice that, but I am getting old and that may not be as easy as it would have been 30 years ago! Tournaments now may all have an online aspect, so maybe I will give it some thought! 4.4 stars for this week’s LAT Saturday challenge. 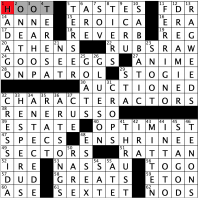 Another quick solve! The noise-canceling headphones must be doing the trick! Nice wide-open grid from Stan this week, but nothing overly difficult. I got the NW section fairly quickly, and just proceeded down the grid pretty much in order. That is rare for me on a Stumper. I show 68 words in this grid, which surprisingly doesn’t have a tone of long entries save for the 15 spanning the middle, but there are some nice stacks of 8- and 9-letter entries. Any Stumper time under 10 minutes is a triumph for me, and this was well under that, so suffice it to say I am ecstatic! 4.3 stars today.

Lots of bite in this one!

THEME: Types of spies are broken up in four rows of the puzzle 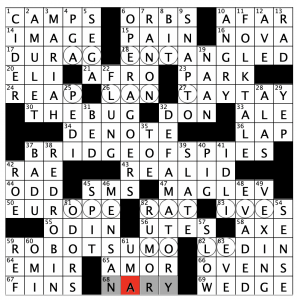 I’m too scared to check the regular applet that Universal uses. Someone, please tell me that they’ve figured out how to use circles, because this one needs it.

What an impressive grid! It may go under-appreciated, but there is A LOT of strain on this grid with all that theme, and it’s filled quite well, considering. I mean, I got hopelessly hung up in the MAGLEV / IDLI crossing and had to run the alphabet for the L since I’d never heard of either of those. I didn’t know READwas a thing either (as clued anyway). So some odd stuff here and there (is THE BUG a stand-alone phrase?)

Loved that TAY-TAY made an appearance with that nickname, and I’m looking forward to YouTubing ROBOT SUMO tonight!

It might’ve made things a little easier to make BRIDGE OF SPIES the title rather than the revealer, but hey- I had fun, so no real qualms. Excellent finds all around from these constructors!