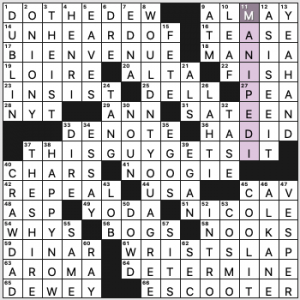 Dang, I used up much of my blogging time gathering the four links above. Also, news. It remains pretty consuming, doesn’t it?

Fave fill: DO THE DEW and its rhyme BIENVENUE, “THIS GUY GETS IT,” a NOOGIE, CRAWDAD, THE SHIRE, “HAPPY NOW?,” “WOULDN’T YOU AGREE?,” MANI-PEDI, and COOL IT. Architect Zaha HADID is always welcome in my puzzle; in Chicago, I’ve only seen a temporary installation she designed for Millennium Park. Not loving the AS I SEE IT/THIS GUY GETS IT crossing ITs plus COOL IT.

Singular VESPER ([Evening prayer]) feels wrongish. ALKANE is blah. “Slap on the wrist” sounds better than WRIST SLAP. “Yes, and …” also sounds more familiar than “YEAH, AND …” to me.

Everyone’s a critic in this grid. Each of our theme answers is a common-ish phrase whose last word can also mean “criticism.” Thus, the clues are wackified. 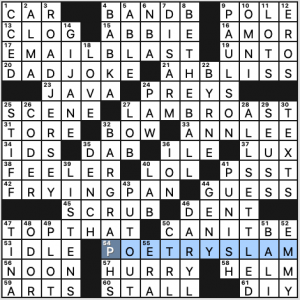 All in all, a fun theme. I admit I didn’t catch on during the solve because I was trying to be quick (my 12-year-old was standing over my shoulder) and the clues seemed wordy. But once I looked closer, I liked it quite a bit. I’m not so sure the clues need the “Series of remarks” part. [“Your message is loaded with typos!” e.g.?] works for me.

Loads to like in the fill, too, such as DAD JOKE, “AH, BLISS,” “ALL SETTLED?,” G. I. JANE, BABKA, “TOP THAT!,” “CAN IT BE?” and Caddyshack’s “BE THE BALL” (even though I’ve never seen the full movie). I don’t think I’ve ever heard the phrase ROAD JERSEY, but it makes sense. I didn’t recognize the name Sara PAULSON either, but I have heard of her show Ratched, the Netflix series which is a prequel of sorts to Ken Kesey’s One Flew Over the Cuckoo’s Nest. If you’ve seen it, let us know what you think of it.

Fun theme in a grid loaded with sparkly fill. 3.9 stars. 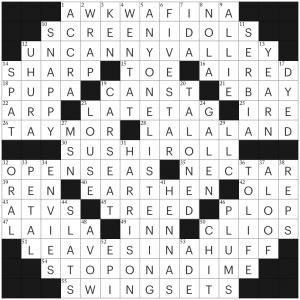 Hi everyone, gonna be a quick one today because the New Yorker didn’t get this gem of a puzzle up until after my working hours started, but let me just say, this was a *delight*. Cool grid shape, crunchy long stuff, clean short stuff, basically everything you could want from a lightly challenging New Yorker puzzle.

Overall, a fresh, quick, beautifully-crafted puzzle to kick off the weekend.

Ps., Brooke Husic and I made today’s USA Today crossword, if you feel like doing another lightly (read: not at all) challenging puzzle this morning! 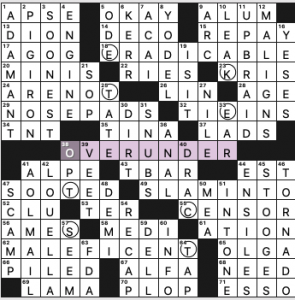 Theme revealer is OVER/UNDER, 38a. [Sports bet based on total points scored … or a hint to answering four puzzle clues]. Each of those four clues has two answers, one including the circled letter above the black square interrupting the entry and one with the circled letter below:

UPBRAID is my favorite bit of fill. Lots of stuff I didn’t care for, but with each themer affecting four entry spaces in the grid, that’s sort of 16 themers, so it’s probably gonna be rough to fill. ALPE, ENSILES, VEET, SOOTED, and APSE right at 1-Across, meh.