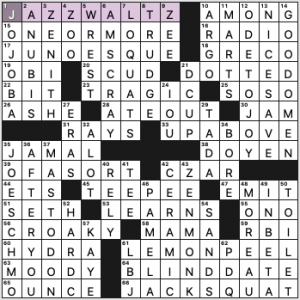 Trenton unleashed the uncommon Scrabbly letters and used 11 from the Z/Q/J family. The fill is far more solid than I’d expect, so I’m grateful he didn’t JAM an X in there just for the sake of chasing a cheap pangram.

I remain brain-sore from four days of watching more CNN than I have in years, so: moving on from paragraphs to the listy-list: 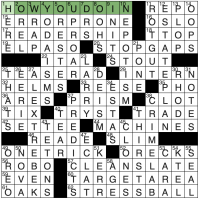 These are two names I don’t know, but they produced a fine puzzle. I have mentioned before that I don’t always have time to do every puzzle, so perhaps this duo has popped up somewhere else previously. At any rate, this was a fantastic puzzle. I found it a little tough to crack into especially in the NW corner where we normally begin; I think my first entries were in the right central area, then I slowly looped around to finish up where you’re supposed to start! I had a lot of fun with this one, and that is the whole point, is it not? 4.7 stars from me.

That is all! There is a new Panda Magazine out today, so I will be busy! 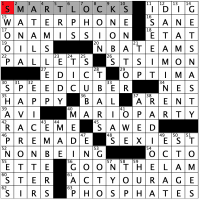 Well, today is the start of a new era with the Saturday Newsday puzzle: it is supposed to be easier! It is now called the Themeless Saturday puzzle. I, for one, enjoyed the old difficulty level. Perhaps some did not. In the end, if this change brings more solvers to the fold, then it is a great decision. But for those of us that like our themeless puzzles to have a lot of teeth in them, which may even lead to gnashing of our own teeth, this is a bittersweet day.

Make no mistake: this puzzle still isn’t easy. But I got it done in about 8 1/2 minutes, which would have been a major triumph under the previous difficulty level. I noticed Stan posted on Facebook an announcement concerning this change, and the initial comments echoed what I mention above: people still want the harder puzzle. I am anxious to hear what you think! I will be watching these comments today much more closely today to see how people feel. Please share your thoughts! In the meantime, still 4.5 stars for a great puzzle by Brad Wilbur and Matthew Sewell.

THEME: Words/phrases that don’t mean “bl?nder” where the ? represents a vowel. 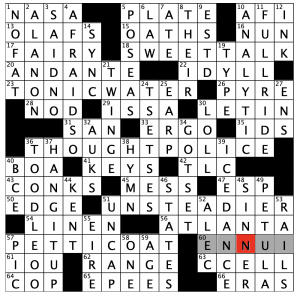 This is a very funky, clever, and quirky idea. It’s not often that the theme answers don’t really have anything to do with the theme (in a sense, that is). I don’t think I’ve ever really seen a theme with this type of approach. And I never would’ve considered BL?NDER with a vowel progression to seed the idea.

Love that the first word(s) of the clues are all synonyms for the BL?NDER, yet have a completely different meaning in relationship to the entry that goes in the grid.

I doubted myself at BCE/CONKS as I supposed it may be BBE/BONKS. I think I’ve seen BCE before, but it’s not crosswordese that I keep handy. I guessed correctly though :) 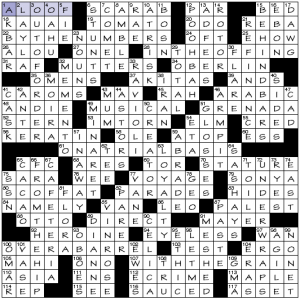 No duplications among the prepositions. Five acrosses, four downs, and a nicely integrated grid. That’s all I can muster today, as I’m dealing with some pain issues and having trouble concentrating.