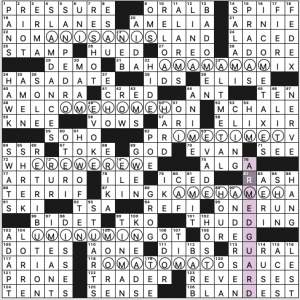 Theme is “phrases in which a random tetragram, a 4-letter chunk, is repeated”:

I might’ve liked this better as a daily puzzle theme with just three or four solid themers. Don’t think these eight all rise to the same level. Eight themers without any humor or wordplay to them is also a lot to work through.

2d RIOT shield and 76d ARMED GUARD evoke the events of Wednesday. I’m still shaken by this week’s upheaval and the stunning revelations of just how many people hate actual democracy. BAD OMEN. ALARMS. RELOAD? RETRIBUTION. I know none of this was the constructor’s intent, but I know I’m not the only one who bumps up against fill like this and feels the weight of those evocations.

2.8 stars from me. More fun stuff in the puzzle would have been a boon.

The puzzle fell easily, as my time would suggest. The theme took me a little figuring out. The hand of the title is cards. Each theme entry starts with something that happens at the poker table. 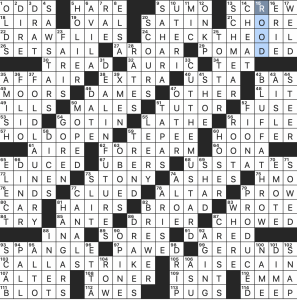 The theme didn’t add anything to my enjoyment of the puzzle since I didn’t figure it out while I was solving. It’s a perfectly fine theme that’s not particularly my cup of tea. It’s at least better than today’s NYT theme, but that’s a low bar.

We’re off to make beads again, so I’ll skip right to what I didn’t know before I did this puzzle: that Anna FARIS had a role in “The Emoji Movie.” I also didn’t know that a ROOD is specifically a cross above an altar.

Quick write-up for me since I have to go pick up (another) new puppy. I gave it all the consideration that one gives while standing on a checkout line, debating whether or not to purchase the latest Japanese imported Kit-Kat flavor, and decided that I did, in fact, need another Great Dane.

THEME: Abbreviations for days of the week are “broken” in theme answers. 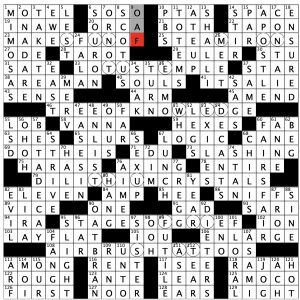 This is one that should please the masses. That’s two weeks in a row! It’s also one that is great as in intro to Birnholz puzzles, as it has plenty of clever clues, fairly crossed entries that may not be all that familiar, and, of course, a hidden message that STILL caught me off guard even though I KNOW I should be on the lookout for it (that being FIRST LIGHT in this case).

Quite a few of the theme answers were new to me or not something I think of on a day-to-day basis. DILITHIUM CRYSTALS and LOTUS TEMPLES were brand new, TREE OF KNOWLEDGE rings a bell, and AIRBRUSH TATTOOS I only think of occasionally when I’m out some outdoor festival and I say to myself “Well look at that! Someone has an AIRBRUSH TATTOO tent!” But again, all fairly crossed, and Evan needs quite the string of consecutive letters to pull this off. They have to be odd number too, unless paired in the same row, in order to pull off the Left/Right symmetry.

Anyone keeping stats on how many WaPo puzzles are non-rotational symmetry, by the way? I would be very interested to find out! Maybe Evan has that detail…

Smooth fill helped for a steady North to South solve for me. I got hung up on DOT THE I’S as my brain only saw it as DOT THE(S)IS, which is not a thing, but I solved it in bed after a few glasses of wine last night.

Okay, that’s it from me! Off to get an oversized puppy.

THEME: OUR is added to common phrases, and wackiness ensues. 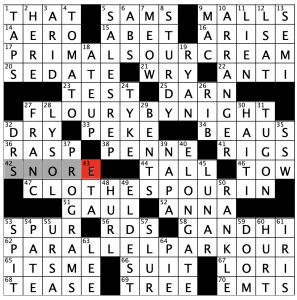 It’s rare when every single themer lands so solidly for me in a theme like this, but these are all fantastic. If I had to pick one that I like the best, I suppose it’s FLOURY BY NIGHT because it’s so absurd and offers a fun visual to boot.

It took me a while to see the theme actually, because I was focused on the food aspect of it. The title as well as the first two themers gave me tunnel vision that I was supposed to be focused on the SOUR CREAM and the FLOUR parts rather than the OUR part, so a fun little facepalm when I finally figured it out.

Fill was just fine, though it took me longer than usual. I have such trouble spelling GANDHI. I always want to put the H after the G.

That’s it for me!

We have a debut puzzle here for one of our co-constructors, so Congratulations are in order.

JUST IGNORE ME is the revealer at 121a [“Pretend I’m not here” … and a hint to the two extra letters in each starred clue]. Each clue has “me” in it somewhere and must be mentally removed to make sense of the clue. 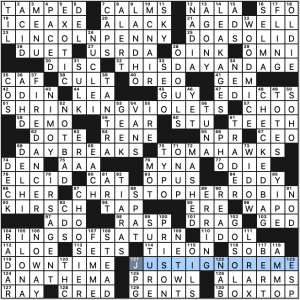 Something didn’t sit well with me during the solve, and I realized it was the clue for TOMAHAWKS (but not the bit about the extra “me”s). There’s nothing factually wrong with it, but it feels like it perpetuates the stereotype of the warlike, blood-thirsty Native American, which I could do without. But how else to clue it? After all, it’s not common knowledge that the tomahawk was used by American soldiers in Vietnam and Afghanistan or that some current-day tactical police units are issued them as well. (I certainly didn’t know that; I just looked it up.) There’s the Navy missile that bears the name “Tomahawk,” but then the misdirecting “Amex” couldn’t be used. There is another angle. I would have much preferred a clue like [*Amexes thrown in competitions].

That deeply troubled clue aside, the theme was tantalizingly inscrutable until the revealer did its job. Each clue seemed so close to making sense but there was just the one thing frustratingly off. Thankfully, the revealer provided that satisfying aha moment so that everything made sense and the LINCOLN PENNY dropped, as it were.

Top fill: FIRE DANCER is pleasantly EXOTIC. Then we also have WOODMICE, CHECKED BAG, IRS AGENT, AGED WELL, DO A SOLID (which would be better with a “me,” ironically), DOWNTIME, ANATHEMA, and CHOOSIER (though it opted for a non-Jif clue).

Clues were mostly straightforward, thus speeding up my solve time, but I will note 70d‘s [Error in tihs clue]. The answer is TYPO, but you know, it’s not really a TYPO if it was intentionally spelled that way.